Levi: Toronto feels far more like London that I would have expected. When I was here two years ago for a conference, I didn't notice that because I didn't get out of the immediate downtown area much. We made it into town early enough yesterday, though, for me and Jim to wander around a bit through what seemed to be kind of the Belmont area of Toronto. The businesses all keep their doors open, like in London, and the crowd--young, stylish, multi-ethnic--feels much more international than a similar crowd in, say, Chicago, would. The weather was beautiful, as it was on my previous trip, leading me to suspect that perhaps the weather is always great in Canada, but is painted otherwise by Canadians in order to keep Yankee fans from retiring there en masse. When I went for a short run this morning, I noticed another similarity to London: it's hard to run on the sidewalks in Toronto because there are too many pedestrians. I guess it was good practice for the slow-runner-dodging required in the marathon--although this was like the marathon would be if, say, everybody but me decided to walk the race, except for a couple of people on bicycles.

But on to the game: Red Sox Nation descended on Skydome in force last night. I suppose we shouldn't have been surprised--the combination of Fenway's astronomical prices and limited seating must make an eight-hour drive to Toronto seem reasonable. So when Jim and I reached the ballpark, delivered by the TTC subway, there were a couple thousand Sox fans waiting outside the gates. Various psychologists and counselors were making a fortune wandering the line and taking appointments from long-suffering Sox fans. Every once in a while, a Blue Jays fan would wander by, seeming out of place. The atmosphere wasn't quite as overwhelmingly Sox-positive as the pro-Cubs crowd at Milwaukee creates, but I have no doubt the audience was more than half Sox fans.

From the outside, Skydome looks less like a ballpark than a convention center or hotel or parking garage, its utterly nondescript concrete exterior looking out of place topped by the retractable roof, which was rolled back for the game last night. Inside, the décor‹concrete, neon, pastel railings, futuristic logos on the food stands--reminded us a bit of EPCOT Center, which I posit is the most-quickly out-of-date design in the history of the universe. The only way Skydome could have seemed more mid-80s would have been if the ushers had been decked out in Members Only windbreakers.

Our seats, way down the right-field line, 21 rows up, are seats that are pushed back out of service when Toronto's Argonauts play arena football, which I hear resembles hockey or curling or something. Remembering the worshipful articles about the glories of Skydome that appeared in every U.S. newspaper when the Jays were good in the early 90s, I went in search of interesting vegetarian food, and I found some. There was sushi stand, advertising sushi "Made while you wait." In Canada, "Made while you wait," must mean, "Taken from a stack of containers of pre-made vegetarian sushi while you wait." It wasn't the best sushi I've ever had, but it was, hands-down, the best sushi I've ever had at a ballpark. I followed it up with a vegetarian burger, which, like most of its ilk, was predictably bland. Jim had pizza and a bag of popcorn so large that the usher made him go buy it a ticket.

From the start of the game, the Sox fans dominated the proceedings with their cheering. Even the many children seemed to pay attention to the game. Tim Wakefield threw his "balle de papillon" past several Blue Jays early on, although one pitch which failed to knuckle‹making it a 120-kilometre-per-hour fastball‹was deposited by Orlando Hudson in the right-field seats. But an inning later, Doug Mirabelli knocked a "balle de c'est la vie" from Miguel Batista into the second deck in left to give the Red Sox a 3-2 lead. Chants of "Let's go Red Sox!" swept the park. The game remained close, with Tim Wakefield, hoping to keep the crowd in the game, managed to load the bases with no one out in the 6th, forcing a reliever, former Blue Jay Mike Timlin--who wears a camouflage t-shirt under his jersey--to strike out the next two Blue Jays and get a groundout to preserve the lead.

When the seventh-inning stretch rolled around, the mostly-annoying P.A. announcer---who seemed to take his vocal stylings and enthusiasm from former "Double Dare" host Marc Summers‹shouted to the assembled, "It's seventh-inning stretch time, and you all know what that means!" Fool that I am, I thought I did. Instead of one of the two acceptable songs for this moment (I allow "Roll out the Barrel"), the Jays began playing some hideous song that mixed loud guitars and processed drums and banal lyrics about the Jays, the Skydome, the baseball, and how we're all going to enjoy a day at the ballgame. It even referred to "the umpire's call" as an element we might have been looking forward to, which I suppose we might, in the same sense in which we might look forward to hearing that our cancer is benign. It was a nasty little song--but I was given pause when I looked around and saw that the audience was kind of into it. They were making some kind of lazy gestures that were being encouraged by the Jays' cheerleaders (yes, that's another abomination that we won't discuss) atop the dugouts. Maybe I was wrong? Maybe this was a good song, beloved by Jays fans? But then I remembered that half the audience were Red Sox fans, and we all know that Red Sox fans prefer pain and suffering to pleasure and happiness. They probably play the long version of "Feels So Good" at Fenway in the seventh. "Take Me Out to the Ballgame" was played following "Sucky Jays Baseball Song" so I guess no permanent harm was done. But the whole thing did nothing to lessen my feeling of being stuck back in the 1988-1991 period, a dark era if ever there was one.

The game was the longest we've seen on the trip so far, but it stayed close--5-4 Sox--to the end, so we didn't mind. And, unlike the Sox fans who left--rushing back to their hotels to catch the latest medal count update?--in the 8th, we didn't have anywhere we needed to be. When Keith Foulke struck out Eric Hinske to deliver the W for the Sox, a rousing cheer went up from the Hub fans, and, for one night at least, all was well in Red Sox Nation‹though the situation among the Sox fans still didn't feel quite healthy. After all, midway through the game, apropos of nothing, a chant of "Yankees suck!" made the rounds. Obsession is an ugly thing, as are festering inferiority complexes.

Oh, and Johnny Damon? He played a solid centre field, though one ball went over his head. Walk, groundout, single (complete with a stolen base and an advancement to third on a throwing error), strikeout. Sadly for everyone involved, neither his helmet or his cap ever left his head. If I assume that that's Bud Selig's fault (Maybe Selig ordered Damon to get some toques that fit?), is that a sign that my Selig hatred is becoming unhealthy?

Johnny Damon, MVP
Who could e'er compete with thee?
Thy tresses steal the hearts of fans,
Thy beard surpasses any man's.
Though sportswriters may disagree,
The cognoscenti are with me,
And ladies coast to coast can see:
You're super-cute‹you're MVP!

Oh, Johnny Damon, when you walked,
Why did you not steal second?
And having stolen second, chalked
Up an easy steal of third--
With each advance your helmet flying
Off behind you in the dirt?
I worry that you're just not trying,
Perhaps you fail to understand
Just why it is we show you love.
Here in this distant foreign land
We like your play, but way above
All else we love your beard and hair
Unfettered by your helm or hat,
Free-flowing, lovely, everywhere.
So, in the field, remember that
We want to see you run and dive
Your cap fly off, your hair set free
Its flowing tresses so alive.
And on the bases, don't forget
Your fans are waiting patiently.
Whene'er the pitcher comes to set,
For you to take off instantly.
Steal second, third, and even home.
Run, run--that's what we love you for!
We even promise not to moan,
If you're thrown out--we'll love you more!

Bob: I was going to say that Marc Summers might be Canadian, but a little research shows that he's a Hoosier. Still, there's no reason the announcer couldn't have been Marc Summers. What else is he doing?

Speaking of parallel universe song choices, did you sing along with "O! Canada! before the game at the top of your lungs? That's *my* favorite thing about Blue Jays games. You have no idea how loudly I can sing "O! Canada!" No idea.

Stacey: 1. marc summers is hosting a show on the food network. it only occasionally involves slime.

2. the version of "o, canada!" i hear most often is the hidden track on the end of cub's "mauler" - and the words go, "o, canada! what's wrong with you?" this is problematic for singing along at the ballpark.

Stacey (again): levi, you've never written any poetry for me . . . is it because i don't have a beard?

Johnny Damon's Earlobes: Hey, what about me?

Pro-Red Sox signs in the windows of the SkyDome Hotel... 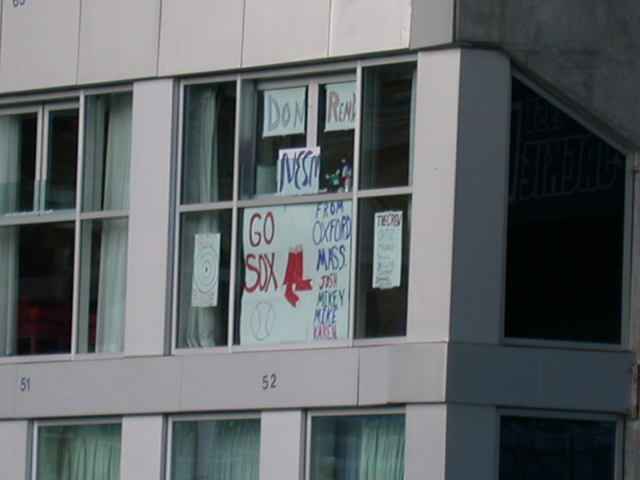 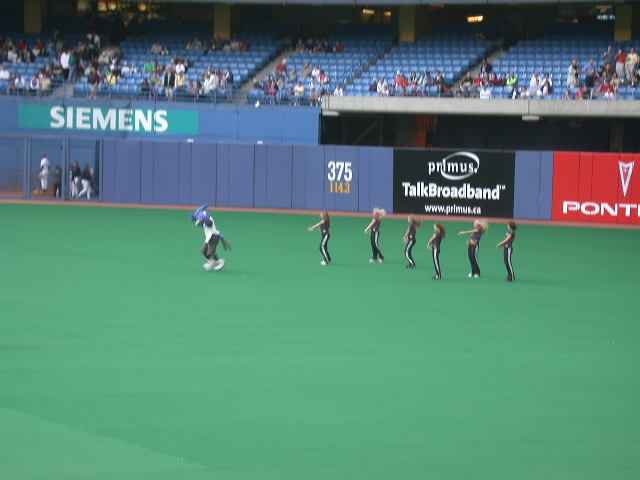 Levi noticed this isn't a foul pole, it's foul netting. Also, in the background, you can see some of the SkyDome's neon... 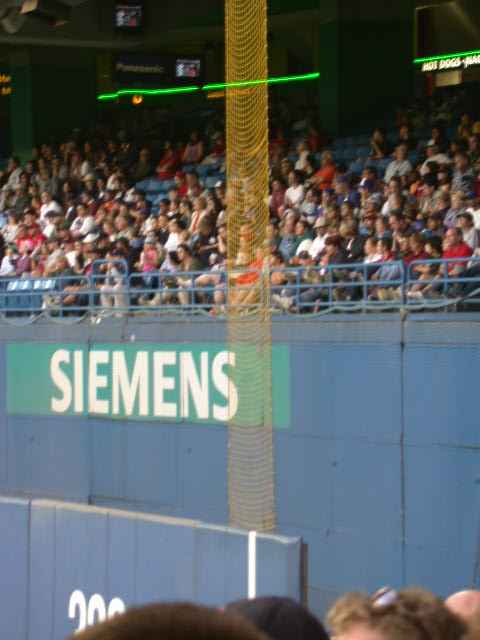 Johnny Damon at the plate... 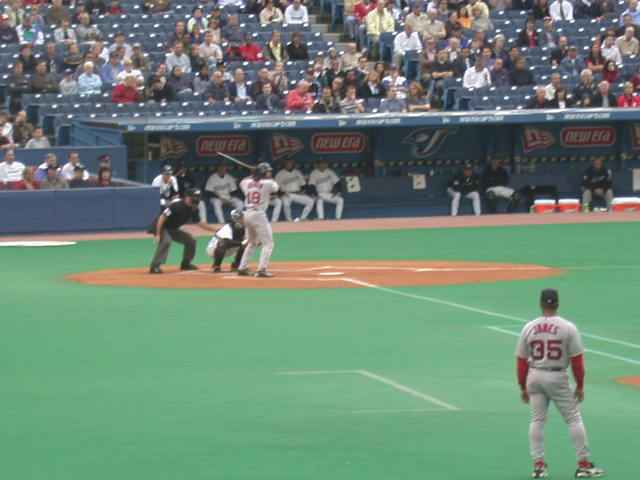 Orlando Hudson alertly pointing out Johnny Damon on second base... 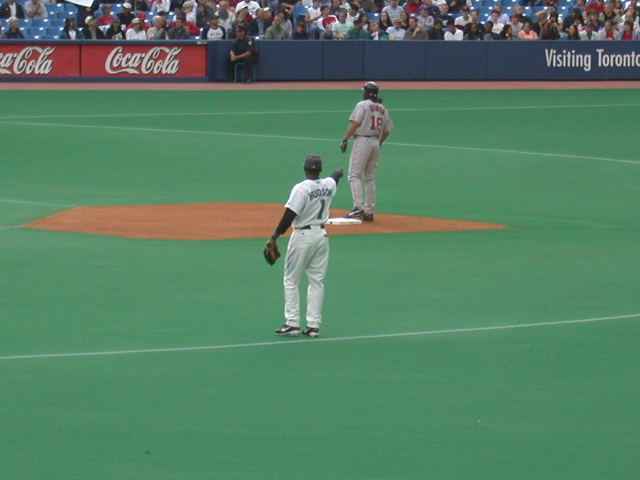 Yes, there are other people in the world with Devil Rays caps, and one of them sat in front of Jim... 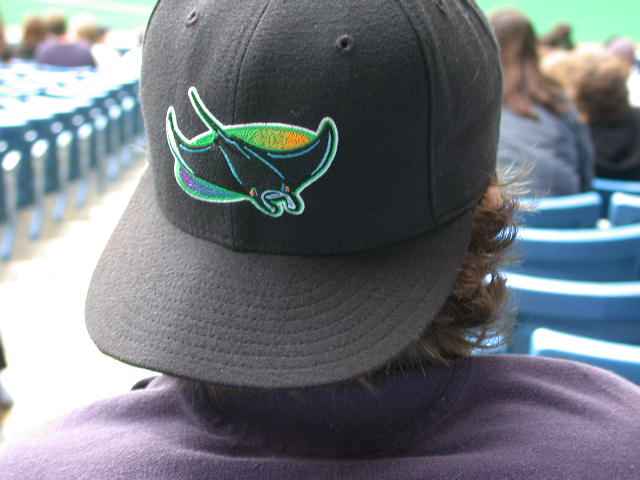 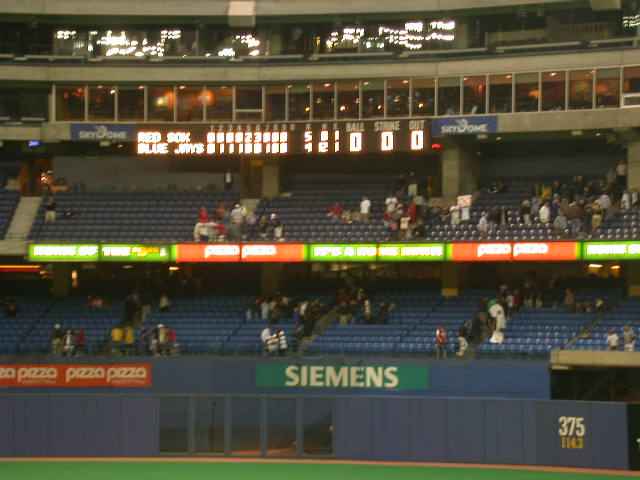 Trip report: Ahead to Part 6; Back to Part 4
Back to Itinerary