Now that we’re deep into the NFL playoffs, here’s Bill James in the 1988 Baseball Abstract, complaining about the integrated major league/minor league system in baseball:

Another of the ugly features of the current system is the abuse by club owners of their monopolistic position in negotiations with cities. Although major-league baseball has a relatively good record on this point in the last fifteen years, a good example of what can happen is what has happened to the football St. Louis Cardinals. The Cardinals, who may be the Phoenix Assholes or something by the time you read this, are owned by an oversized wart named Bidwell. The Cardinals have a perfectly good stadium, Busch Stadium, a major-league facility in every way; nonetheless, Mr. Bidwell is not satisfied. He wants a new stadium, all his own, and he wants the city of St. Louis to tax its $18,000-a-year citizens to build it for him, and if he can’t have that at the very least he feels he is entitled to have several hundred luxury boxes constructed for him at taxpayer expense so he can sell them to rich people for $150 a game. In effect, Bidwell is telling the people of St. Louis that if they don’t give him millions of dollars he will deprive them of their status as a major-league football city — while Phoenix stands by, anxious to give him millions of dollars to acquire that status. It’s an appalling situation, the most blatant abuse of monopolistic power.

The good news is that St. Louis got rid of the Cardinals, who are the worst team in the history of professional football (even though they’ve been around forever, you can’t call them a “storied franchise,” because they have no stories). However, St. Louis ended up deciding they couldn’t live without an NFL team, so a $280-million domed stadium was built for the Los Angeles Rams, who wanted out of Anaheim. Following their move to the Phoenix area, the Cardinals have been in temporary residence at Arizona State University’s Sun Devil Stadium for over a decade and a half. I’ve been to both, and can report that Sun Devil Stadium is not as nice a facility as Busch Stadium. But now, finally, the Cardinals are getting a $371 million stadium of their own for the 2006 season (and $267 million of that is coming from public funding). The luxury boxes, I’m sure, will sell for many times more than $150 a game.

At any rate, in the process of all this, both Busch Stadium and Anaheim Stadium became baseball-only facilities, and got renovations befitting that status.

1) That was a nice reminder that what we’re all seeing every time Pujols plays is a Hall-of-Fame career in the making. Cardinals fans are extremely lucky to have him, and we ought to appreciate it with every at-bat.

2) Even were the Cardinals to go on and get trounced tomorrow night, Pujols (and, to give credit properly, Eckstein and Edmonds, who had tough at-bats before him) at least took what had been a frustrating, disappointing series and gave us something we’ll remember for a long time.

3) My brother’s two concerns post-game? He was hoping the construction guys hadn’t started the wrecking ball back in the 7th for Busch Stadium. (Fox had, as their highlight reel of Busch over the years demonstrated.) Second, he wanted to know if Fox had reconsidered their choice of Lance Berkman as Chevrolet Player of the Game–chosen, as usual, in like the second inning.

4) In the 9th, with one out, Barbara Bush–visible all game as a little Boglin head perched just above the railing behind home–started packing up her bag. “Why,” she probably thought, “would I want to sully my beautiful mind with thoughts of Brad Lidge blowing this game?”

A view of the Gateway Arch you hardly ever get to see: the back… 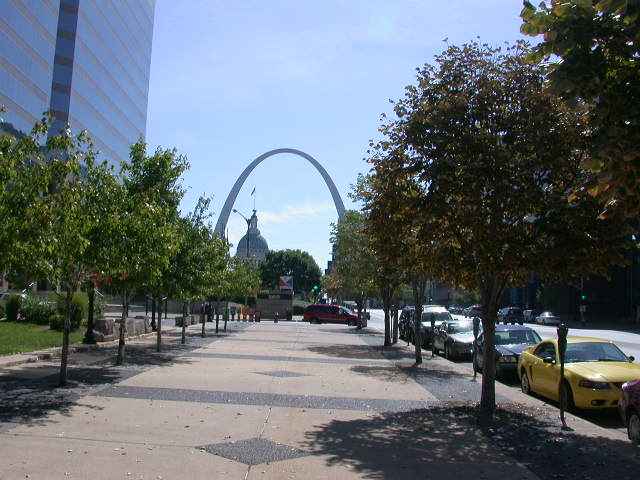 Levi and Stacey in front of a fountain in downtown St. Louis… 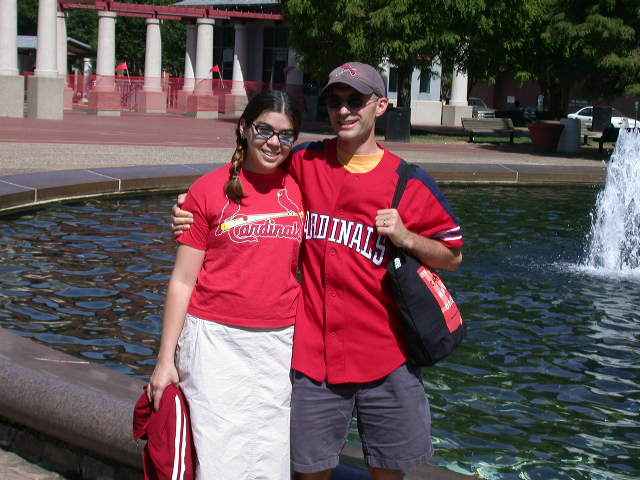 Busch Stadium, supposedly with only two years left to live (the construction site for the new stadium is on the other side of the stadium from this view)… 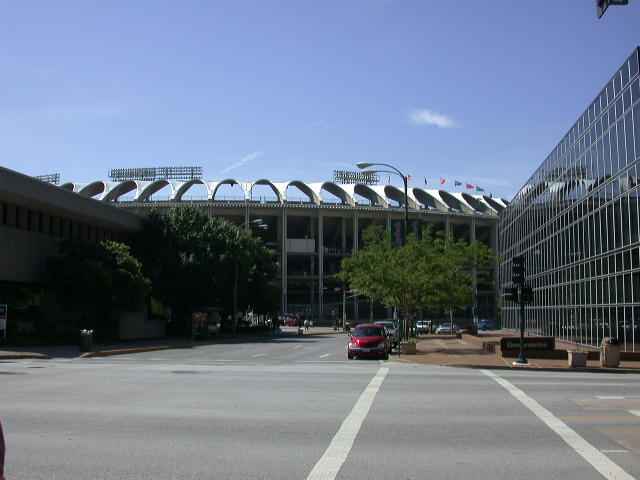 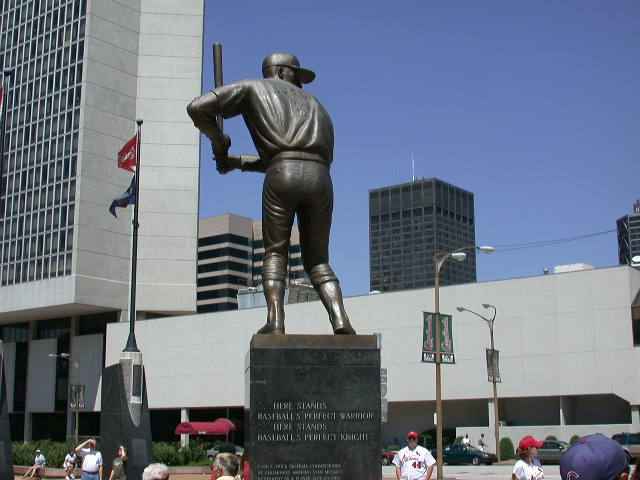 The view from our upper-deck seats… 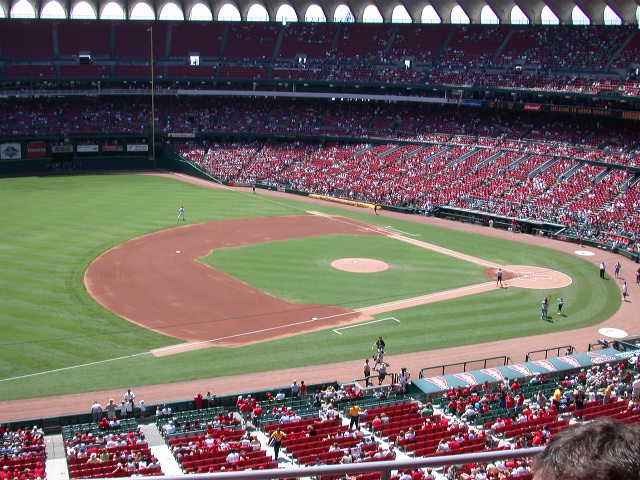 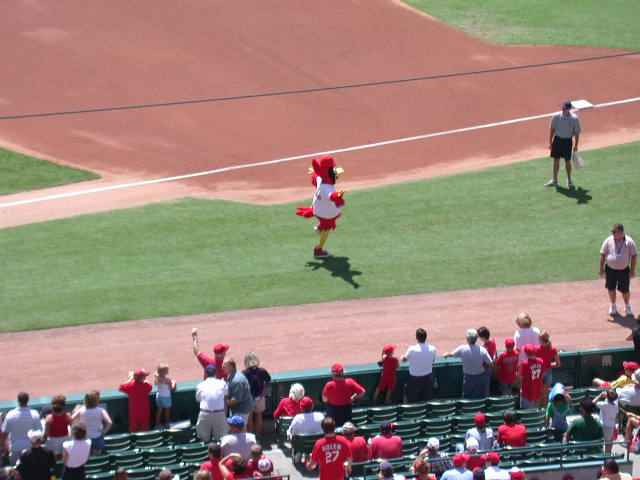 Cardinals up to bat… 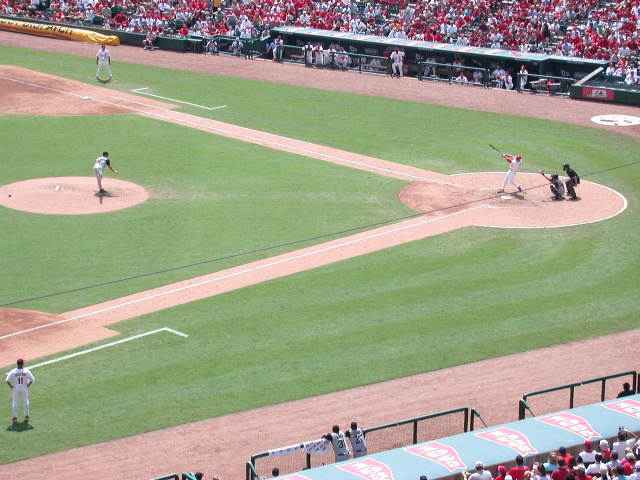 Just some of the hangers-on who joined us for the game; from left, Tony, Jim, Stacey, Levi, Luke… 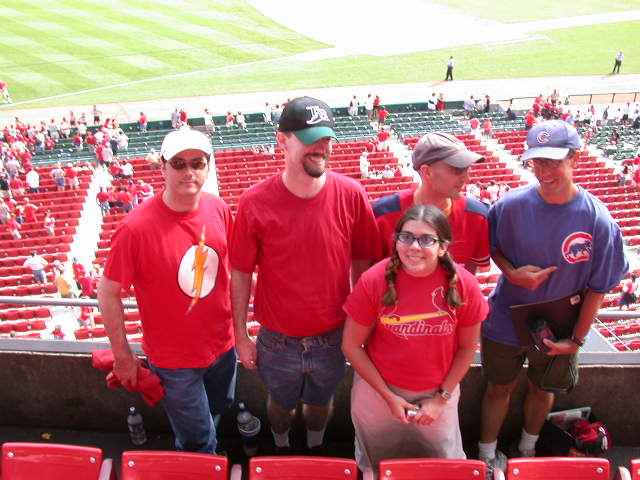 Jim and Jay, another hanger-on… 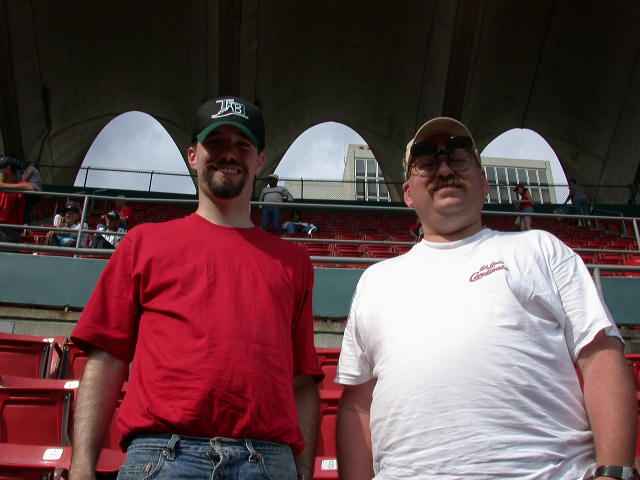 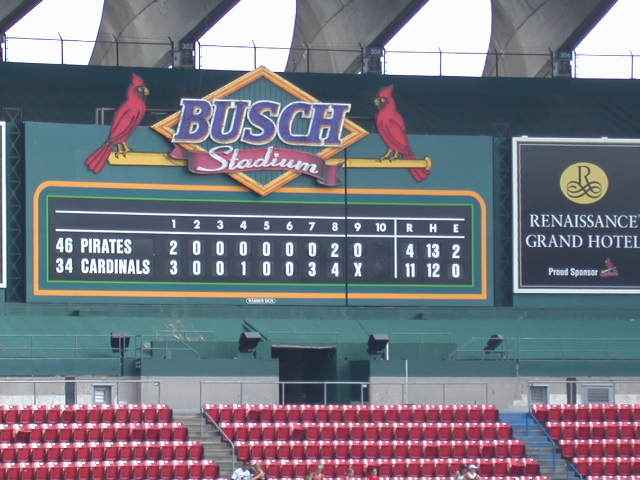 The Cardinals announced today that their new stadium will not be called Monsanto Field or Post-Dispatch Park or Casino Queen Stadium or [Help me out here, Tony. I need some more St. Louis companies to put here.].

For at least the next twenty years, the ballpark being built next door to Busch Stadium will be called . . . . Busch Stadium.

I don’t think anyone’s all that surprised. And while there’s no getting around the fact that it’s yet another corporate name, Busch Stadium has a couple of things going for it. It’s not just a corporate name, for one thing. It’s also the name of a prominenet family that’s been part of St. Louis for decades, and it honors August Anheuser Busch Jr. who more or less single-handedly saved the Cardinals for St. Louis in the 1950s. And it’s the same name we’ve been using for forty years. Consistency has some value. And finally, Busch Beer isn’t even Anheuser-Busch’s most popular product. We could have had something hideous like Tequiza Park.

This does, however, leave an opening. Tony, you need to start putting the pennies away so that in twenty years you can outbid Anheuser-Busch, giving us Custom Insurance Field. By then, maybe we’ll get to meet before games at the Pujols, Rolen, or Edmonds statues.

Jim: Steak ‘n’ Shake has always seemed like it should be a St. Louis company, although I think it’s headquartered in Indianapolis.

Dan: I’ll meet you before the game at the Tommy Herr chapel and reading room.

Jason: I think in front of the new stadium there should be a beautiful fountain from which Natural Light should spew forth.

maura: dude, david lee roth totally tried that during the ‘a little ain’t enough tour,’ except his fountains were flowing with jack daniels (and iced tea in sheds located in dry counties).

my seats were too crappy to get near them. plus i was 16 and probably would have spit the jack out.