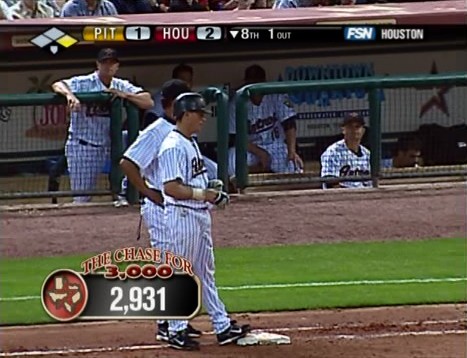 In 1990 or thereabouts, I won a tremendously ugly waterproof watch from 94.9 WRBT by answering the question of who was the modern-day hit-by-pitch leader. Ugly watch aside, it’s always been one of my favorite records in baseball. Last night, Craig Biggio broke one of my favorite records in baseball, being hit by a pitch for the 268th time to break Don Baylor’s modern record. Biggio still trails two 19th-century players for the all-time lead, Hughie Jennings (287) and Tommy Tucker (272). Among active players, Jason Kendall is next with 183.

Biggio’s top HBP season was 1997, which was his best season all-around. Baylor tops him in that category, having been plunked 35 times in 1986. The Hall of Fame has asked for Biggio’s armor, which seems like an underhanded compliment to me: “Send us your armor so we can put it in a case next to a photo of Baylor’s bare arm.”