About a month ago, “Jeopardy!” brought us this nugget of information, and then on Monday, as the $600 clue in a category called We’re No Angels, this came up… 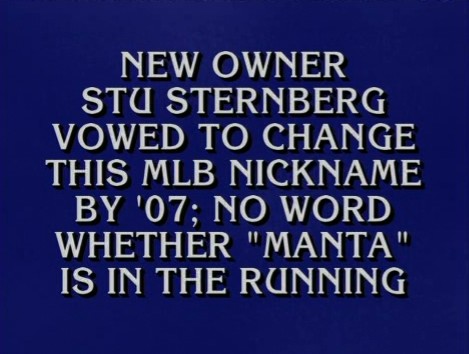 Then, on the Thursday show, the $2,000 clue in Musical Instruments was the following. Not baseball-related, but I know Levi will enjoy it… 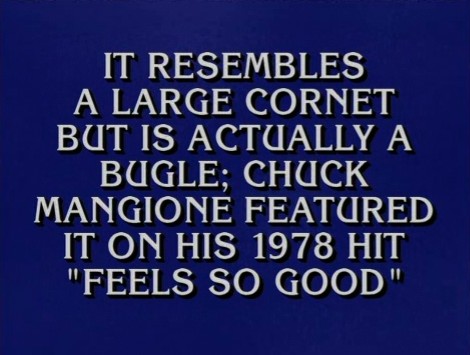 (Monday’s clue was correctly answered — or, you know, correctly questioned. The three contestants didn’t even attempt the Thursday one.)

Whichever “Jeopardy!” writer came up with this clue from tonight’s show, for $2,000 in the category 10-Letter Words:

Remember Chuck Mangione? Remember this instrument that he plays?

Re: the long version of “Feels So Good”

I haven’t looked at the daily distances yet, but I know the trip is approximately twelve days.

That’s not nearly enough time for the long version.

PS Do you think Chuck Mangione wants to join us for a game? He’s from Rochester, so maybe he’d want to meet up in Toronto.

I’ve added approximate driving times to the itinerary, for Levi to calculate how many times the long version of Chuck Mangione’s “Feels So Good” can be played on each leg of the trip. Actually, since Levi has a first-generation iPod, I’m not sure how familiar he is with the concept of the “on-the-go playlist” feature of the third-generation iPods. This allows someone in the passenger seat to easily construct a playlist consisting of, for example, “Feels So Good” three times, the Beach Boys’ “Kokomo” twice, and then “Feels So Good” four more times. It would also allow someone in the driver’s seat to steer the car into a tree.

On another note, I got my brand-new passport in the mail today, so that I can more easily get into and out of Canada on this trip. My previous passport was issued in 1984, the last time I traveled outside the borders of the U.S. Why, it’s old enough that it has separate stamps for France and Belgium in it! (My mother finally dug the old one up from wherever she’d been hiding it and sent it to me, thus finally allowing me to apply for a new one.)