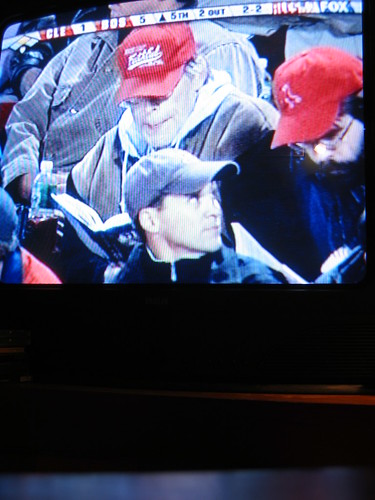 Hang around me and Stacey long enough, and you’re sure to hear us speculating about the dangers of the coming zombie apocalypse. We’ll enter a building and note whether the doors open in (bad) or out (good); we’ll speculate on whether a bow is a good anti-zombie weapon (no, because eventually you’re going to have to go get the arrows); we’ll weigh the merits of having a zombie apocalypse supply cache (shotgun, ammo, canned brains) versus having a bird flu apocalypse supply cache (water, hand crank radio, forty pounds of peanut butter).

Well, after paying close attention to Friday night’s Yankees-Tigers game, we’re beginning to wonder whether we were focused on the wrong danger. The coming disaster isn’t a zombie apocalypse . . . it’s a Giambi apocalypse.

Several times during the game, Fox’s X-treme Close-up Camera caught Derek Jeter lifting his cap off his large head and adjusting it. The next shot, inevitably, would be of Zombie Giambi, eyes rolling and mouth wide, in near-ecstasy at the thought of Jeter’s delectable brains.

So in anticipation of the Giambi Apocalypse, what should we put in our supply cache? After this weekend, I know two things: Kenny Rogers and, just to be safe, this guy.

Jim, with whom I failed to see a baseball game last week while I was staying with him in Los Angeles, alerted me to a USA Today story about those hip graphics Fox uses for their football coverage.

Fox, known as the NFL’s most flamboyant carrier, is even cutting back on its glitz.

So they’ll be reduced. However, he says, Fox is bringing back the
on-screen robots that pop up on its coverage: “We found we’ve lost some
of the attitude we’ve projected in the past. Robots are sacred ground
for that.”

Did they really need to survey more than one person to come up with “pointless and annoying?” Could baseball be next? I can think of a certain talking baseball that I would describe with just those words–if I you limited me to family-friendly language.

And what the hell do they mean by “robots are sacred ground for [attitude]?” These people are very, very strange.

I feel bad that, at the best time of the year for baseball, I’ve been incommunicado. Work has just been too busy. But I couldn’t put off at least posting a few post-season thoughts.

1) I’ve always liked Jorge Posada, but I like him even more now that I learn (from Luke) that he buried Fox Sports’ absurd new “Diamond Cam” a few nights ago. The Diamond Cam answers a question that fans have been wishing they could see since before the invention of television: What would a hitter standing in the box look like if you were a zombie just about to dig his way out of his grave right by home plate? Bob deserves the credit for realizing that it was a zombie’s point of view that Fox was representing. He also deserves credit for groaning, zombie-style, every time the Zombie cam appears.

2) Last night, we had a nice little crowd at the Rocketship. Sarah brought her knitting and some fine, fine cobbler. Sandy brought his computer and some silicon chips, and Bob brought his appetite and his fine, fine zombie impression. Stacey fell asleep on the couch, but woke up for the good parts. And a couple of audience members had the confidence in our boys in red to go home before the end.

3) One point that I’m sure King Kaufmann is going to touch on in his Salon column today: one part of the three-headed cliche monster that Fox has saddled us with in this series said late in last night’s game, “One problem for the Astros is that they haven’t been able to get Brad Lidge, their best reliever, in the game.” Which, of course, is not true. The Astros have chosen not to get their best reliever in the game, because their manager, Phil “Scrap Iron” Garner, has not wanted to use Lidge except in a save situation. Only, if you bring in someone else to pitch to Pujols and Rolen in the 8th inning of a tie game, you’re not ever going to have a save situation. And suddenly you’re in a 2 games to none hole.

4) What can be said about the Red Sox? Sad, sad, sad. Here’s hoping that losing to the Yankees won’t make Johnny Damon reconsider his grooming habits.

Some sharp person at McSweeney’s has answered all of those lingering questions we’ve all had about
what we could expect were we to add a zombie to our fantasy baseball team. In doing so, he gives a fairly good overview of what a zombie would bring to (or take from (hint: it’s gray)) a real team.

Thanks to Luke for pointing me to this important information.

I think the only city we’re visiting where we’ll be in real danger of finding ourselves in the midst of a zombie attack is Detroit, because, well, what other cities have more downtown hiding places for enterprising zombies?

thatbob: Nonsense! You’ll be in Pittsburgh, zombie capital of the world!

Jim: “All you zombies, hide your faces.”

You want us to bring you back some Iron City beer from the ‘Burgh?