With one month to go until the trip officially starts with me flying to Chicago, I thought I’d show you all the items I got from AAA… 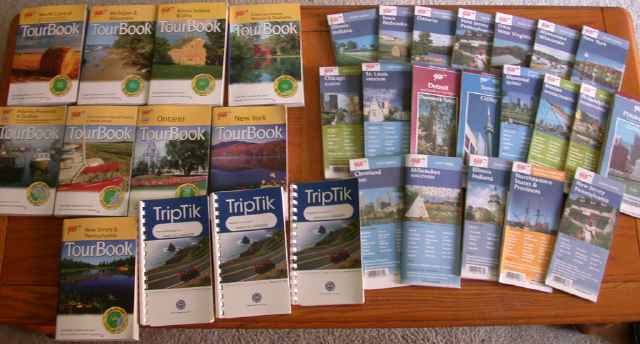 Not all of these items will make the trip, because their weight adds up. Most likely to be left at home are the Tourbooks for Arkansas/Kansas/Missouri/Oklahoma and Iowa/Minnesota/Nebraska/North Dakota/South Dakota, since in both cases, we’ll be in one of the included states for no more than a few hours.

Levi: I guess I’ll make the reservation for a trailer rental now.

Saturday at Wrigley Field, I saw Greg Maddux throw a shutout in 2:05, which I think is the shortest game I’ve ever seen. If the Cubs hadn’t scored some runs in the 8th and thereby forced a pictching change, it would have been around 1:45.

If all the games we see on our trip move that quickly, Jim and I might have to find some nearby minor-league games, just to keep busy. How does 21 games in 11 cities in 10 days sound, Jim?

Baseballrelated.com was represented today at the 2004 induction into the Baseball Reliquary’s Shrine of the Eternals, a.k.a. the parallel universe version of the Hall of Fame. The best part is that I didn’t have to go all the way to Cooperstown for the inductions; instead, I took public transportation to Pasadena.

Where else are you going to hear Lester Rodney, the 93-year-old former sports editor of the Daily Worker, tell Jackie Robinson stories? Probably nowhere. The story about Pee Wee Reese putting his arm around Jackie never fails to move me.

Later, Dick Allen waxed eloquent about having to play Roberto Clemente and the rest of the “Lumber Yard”: “They’d keep us on defense for 35, 40 minutes, and then we’d only be in the dugout for 7 minutes.”

After I got home, I watched my TiVo recording of (what turned out to be) a 10-4 Cardinals victory over the Reds. DirecTV has had another free preview of the MLB Extra Innings package for the few days following the All-Star break, hoping to sell a few people on ordering it for the second half of the season (for only one-third less than what it cost at the beginning of the year). I figured I should watch the Cardinals so Levi and I will have something to talk about all those days in the car. That Scott Rolen certainly is a good player! Also, the Reds held my interest by bringing in a member of my All-Name team, Todd Van Poppel. (Among the other members of my All-Name team: Quinton McCracken and Delino DeShields.)

Since it was a home game for the Reds, it was the feed from Fox Sports Net Ohio, and something strange was going on every time announcer George Grande would do a “Reds baseball on Fox Sports Net is brought to you by…” announcement; he’d read the plugs, and then would shut up for 15 or 20 seconds until the music bed ended. (And 15 to 20 seconds of a baseball announcer being silent seems like an eternity!) My semi-educated guess is that local cable systems put in their own sponsorship announcements there, but if anyone knows differently, please use the comments below. Actually, since I don’t watch much baseball on TV, for all I know, all the Fox Sports Net affiliates are doing that now.

Jim: Two things I forgot to mention…the induction ceremony was being interpreted for the benefit of the “Dummy” Hoy contingent, and because I was seeing it over and over, I now know the sign language for “baseball”: bring your fists together in front of your chest, elbows out, as if you’re in a batting stance.

Also, the first person to leap to his feet to give Lester Rodney a standing ovation was a man wearing a Dennis Kucinich T-shirt.

Levi: No, the pause is the new system where you, the viewer, supply the ad copy. Then you send Fox money.

Toby: What a Smart Alec Levi is. Yes, Jim, that slot might be for local inserts or it could be for a local station identification.

Was Buck O’Neal at this gathering you attended?