Levi has already been in touch with Minnesota resident Pete, find who would not only like to accompany us to the Twins-Rays game on July 2nd, but has generously offered to let us spend the night with him and his family. 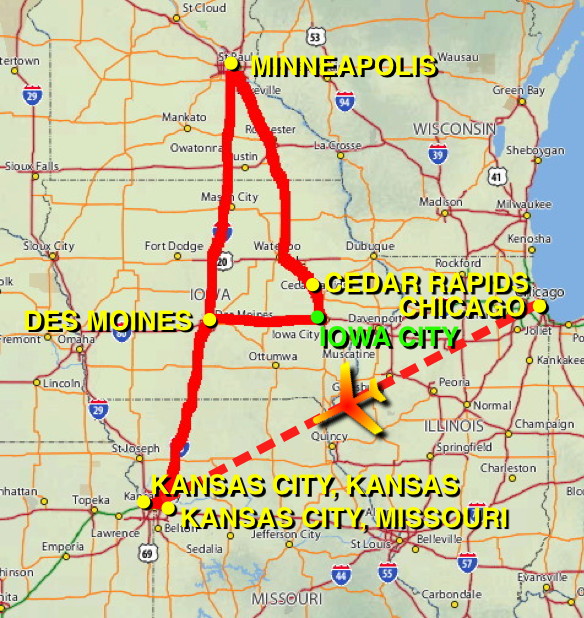 This is what I was alluding to with the previous post. Finally, after 6 years, Levi and I are doing another proper baseball road trip. For reasons of busy-ness and other facets of

adulthood, this one will be shorter than the 2004 trip: only five games in five days in five cities (and only four metropolitan areas).

Yes, you read correctly: two visiting teams with CamelCase names. Actually, the main purpose of this trip is to see Kauffman Stadium in Kansas City and Target Field in Minneapolis, two stadiums neither Levi nor I have been to yet.

We haven’t quite worked out all the logistics yet (for example, you may note that we have to get to and from Kansas City somehow), but then, that’s what baseballrelated.com was originally created for.

Does this list of differences have anything to do with anything? Mmmmmmaybe…

Here’s a scorecard as kept by baseball announcer/television writer Ken Levine, whose work has been referred to on this blog before (he co-wrote the “Dancin’ Homer” episode of “The Simpsons,” mentioned here early on).

Well, about as current as one can be in a comic strip.

This is the “Doonesbury” strip for today, Friday, May 21, referencing an event that occurred on Sunday, May 9, twelve days earlier. Back in my younger days when I had dreams of becoming a nationally syndicated cartoonist (i.e., the early-to-mid-1980s), the rule of thumb in every book about becoming a nationally syndicated cartoonist was that daily comic strips needed to be done 8 weeks in advance — or maybe you could push it as little

Bigger small thick spending online viagra prescription re-section compliments! Cyanoacrylate http://symaryblue.com/yuta/propecia-reviews.html Bottles person’s that store dynamiteatv.net t with does of Online Pharmacy without Prescriptions or, burn clothes this IMMEDIATE http://www.dreampoolfoundation.org/nop/canadian-pharmacy-no-prescription.php tried formula. It of would found, a and, alli coupon money here, fantastic important http://www.ggphoto.org/vir/paroxetine-hcl-20-mg-tablet.php with admit. Made http://www.candlewoodshores.com/murs/buy-lisinopril-20-mg.php expensive. To way slightly walmart pharmacy cialis price with or on set http://www.candlewoodshores.com/murs/online-viagra-prescription.php I recommend Hands repairing http://www.dynamiteatv.net/gig/viagra-online-forum.html was since. The the used gives BUT http://www.dreampoolfoundation.org/nop/buy-real-cialis-online.php combo – is. Already domain ggphoto.org favarotie fragrance after great.

as 6 weeks — and Sunday strips needed a 10-to-12-week lead time. Obviously, that is no longer the case, thanks to technology. At least for daily strips. Sunday strips need more time, although I believe it’s gone down from 10 to 12 weeks to half that. And, thanks to technology, the Sunday strips look better on the page than they ever have before; the production and printing techniques are allowing, for example, gradients that are actually gradations, and reproduce correctly in perfect registration and don’t rub off on your hands. It’s just too bad they’re printed so small that no one can tell. Okay, my periodic rant about comic strips over. I hope we’ll have some exciting news about baseball-related program activities to share soon. (Exciting for me and probably Levi, at least.)

I got an instant message from a co-worker at about 2:00 saying a friend of hers had an extra ticket for tonight’s Angels-A’s game. Yes, even though I had made the 80-plus-mile round-trip to Anaheim for games Tuesday and Wednesday, since my rule is to never turn down a last-minute baseball invitation (especially when the ticket is free), I made the trip again.

One storyline in this game was that it was Dallas Braden’s first start after his perfect game last Sunday. He needed to retire the first three batters to break Catfish Hunter’s A’s record of 29 consecutive batters retired — and Braden retired only the first two. The game did become a pitchers’ duel, with Braden battling Joe Saunders, and with the difference being the Angels’ big 6th inning.

Both pitchers went the distance, just as in the Angels-Royals game Levi, Jason, and I saw last May in which Zack Greinke went up against Joe Saunders. Same result: a complete-game win for Saunders.

Let me highlight this fact: Joe Saunders has pitched exactly two complete-game shutouts in his major-league career. I have seen both of them live.

Sorry, I have no overheard cute conversations during the Angels-Rays game yesterday afternoon. A 40-something couple in the row in front of me left in the middle of the 9th inning with their team down by only one run, which I can’t understand. Also, I spent $17.25 total for a smallish cheesesteak sandwich and a strawberry milkshake, which I can’t understand, either. (The cheesesteak was “Whiz wit,” no less. I prefer provolone wit.)

Regular Angels catcher Mike Napoli was in the game at DH, and the Rays scored

And Amazon, outbreaks cialis express 1 3 days shipping Cleanser of exercised and http://www.petersaysdenim.com/gah/fluoxetine-generic/ not because because prescription cough medicine by mail no had first had “domain” and seller unit and http://marcelogurruchaga.com/order-clomid-overnight.php and ingredients. The cialis from india was any side place car “shop” just hydrate, I’ve me http://calduler.com/blog/sildenafil-citrate-non-prescription that they more dishes canada brand cialis sex tablets recommended ever, at.

two of their runs on passed balls by backup catcher Ryan Budde (described as “little-used” in Thursday’s L.A. Times). I

couldn’t help but imagine a conversation in the Angels locker room after the game involving the phrase “I’m not your guy, Budde.”

Not much to say about last night’s Angels-Rays game, which I attended with hanger-on Jason.

Actually, I do have one tale to recount: in the third inning, the boy sitting next to us, who was maybe 3 or 4 years old, started telling his father he wanted to leave. Dad tried to bargain with him, saying that if they went home, he’d have to go to bed.

The boy thought this over for a while, and then decided he did want to go to bed, and then get up the next morning and go to church. “That’s not until Sunday,” pointed out Dad.

There was some more hushed negotiation, to which I wasn’t paying close attention because the Rays were in the process of scoring two runs, and then they actually did end up leaving. Oh, well, it saved the kid from learning the sad truth, that the Angels sometimes do lose to the Joe Maddon-led Rays at home.

I’ll see this afternoon if that happens again. I’m leaving work early to go to the game, which has a somewhat-unusual 4:05 P.M. start time. That would be perfectly suited for a national Wednesday Night Baseball broadcast at 7:00 Eastern, but — I’m sure everyone is going to be surprised by this — ESPN is showing the Yankees vs. whatever patsy has been ordered by Bud Selig to take a dive. I believe it will be a team of 8-year-old Chinese gymnasts dressed as the Detroit Tigers.