While I’ve been editing the old posts here to include the comments from the old system, I have of course been reading a lot about Hostess Baseballs. So when I took a break and went to Ralphs to do my weekly grocery shopping, I took a longing look at the section that includes Hostess, Little Debbie, and other snack pastries. As has been mentioned already here, 2005 is a year without Baseballs; however, I saw a product there that I had never seen before, and I just had to buy a couple… 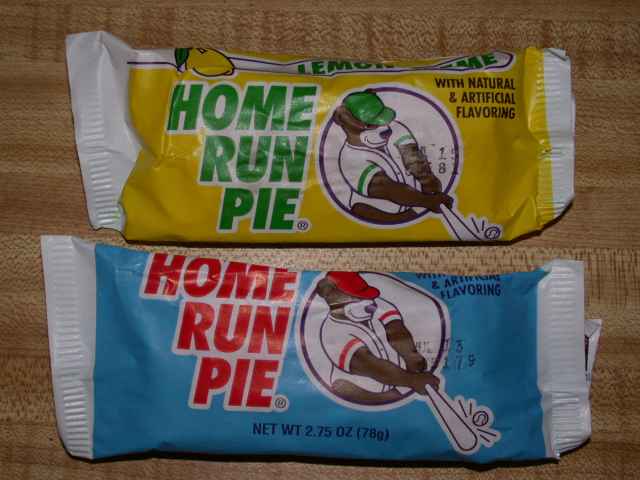 That’s Lemon Creme flavor on top and Vanilla Pudding flavor on the bottom. There were several other flavors available, including cherry, apple, and Chocolate Pudding. They’re made by Horizon Snack Foods of Salt Lake City, so I’m sure they’re just as sweet as Donny and Marie.

One problem: I don’t think the caricature of Johnny Damon on the label quite does him justice. (Also, that doesn’t quite look like a home run stroke, but maybe test marketing showed that a product called Bloop Single Pie didn’t sell as well.)

What he didn’t know is that Jason and I were already planning a trip to Saturday night’s game; Jason was attracted by a giveaway of bobbleheads in the image of Coal Train, the coyote mascot. Jason managed to get a couple of other people to join us — Errol, who he knows from a web site/message board he frequents, as well as Jason’s and my friend Rachel, who was more or less filling in for Levi, since she’s from a small town in southern Illinois (Clay City) and likes the Cardinals, although she has a full head of hair, eats meat, and doesn’t take her shoes off that often. Anyway, I spoke to Ed briefly on the phone, he asked me how to spell my last name, and there were tickets waiting for me at the will-call window, although there were a few moments of confusion when I thought the guy behind the window was asking me for my name, but he was actually asking me for the name of the person who left the tickets for me, which I should have remembered is the more important concept at minor-league will-call windows.

The Flyers were playing the Chico Outlaws again, although since the Outlaws were wearing gray shirts instead of black, it was like we were watching a completely different team. And this time, the Outlaws had a couple of big innings and won 8-2. After the game, Ed Hart was standing by the exit gate, so I introduced myself and we chatted a little bit; turns out he’d just been Googling for mentions of the Flyers and happened to run across baseballrelated.com.

Not too many pictures this time; I posted the “no frowns” portion of the sign at the gate last time, and here are more Golden Baseball League rules… 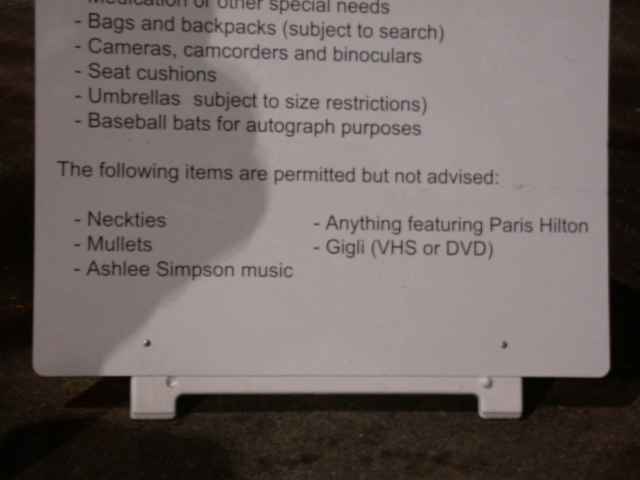 And here’s Coal Train with my other bobbleheads (Fernando Valenzuela, Kirk Gibson, and a hidden Tim Salmon)… 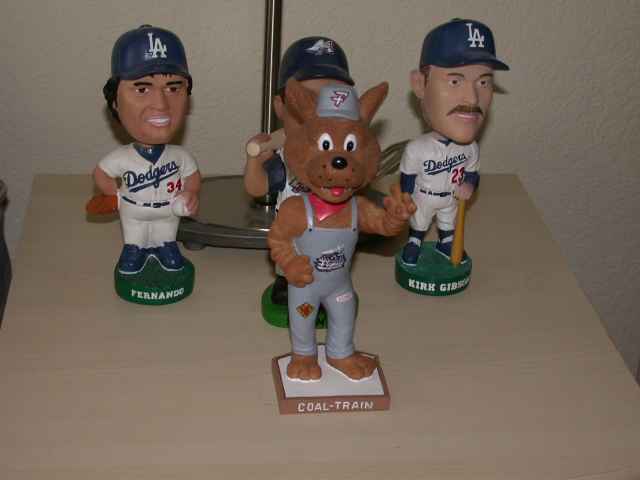 Incidentally, something that made Rachel laugh a lot: the Flyers’ catcher was Drew York, and I suggested that when he came to bat with the Flyers needing a hit, or a run, or whatever, that the crowd should sing “It’s up to you, Drew York, Drew York!”

Thanks again for the tickets, Ed!