Wow, I stayed up longer than the Los Angeles Times sports department last night! They went to press with “the White Sox quickly took control and built a 10-4 lead after 7 1/2 innings,” but I was awake until I caught up with the TiVo recording in the middle of the 8th inning. Speaking of the L.A. Times, here’s noted class act Vin Scully, quoted today talking about possibly being in the broadcast booth when Barry Bonds passes Babe Ruth’s and/or Hank Aaron’s home run records: “I would just as soon it not happen against the Dodgers….If I had my druthers, I would rather have that awkward moment happen to somebody else.”

Thanks to advanced technology that is currently available to me, I’m now thinking I’m going to attempt to make a post here once an hour today, with the first one around two hours from now, at 11:00 A.M. Pacific/1:00 P.M. Central. I will also attempt to be online on AIM/iChat as trainmanplus all day while I’m watching TV, so feel free to chat. (If I don’t say hi back, it’ll be because the advanced technology has turned out to be too overwhelming.)

As I write this, the Sox and Indians are still in a rain delay. Tropicana Field’s not looking so bad right now, is it?

It wouldn’t be Opening Night without a picture of Chessie near my TV. I now have a different TV configuration than I did last year — my cheap Ikea entertainment cabinet got mostly destroyed when I moved last May — so it’s hard for Chessie to get next to the TV. So you’ll have to settle for her under the TV, hiding from Jon Miller and Joe Morgan, as well she should. 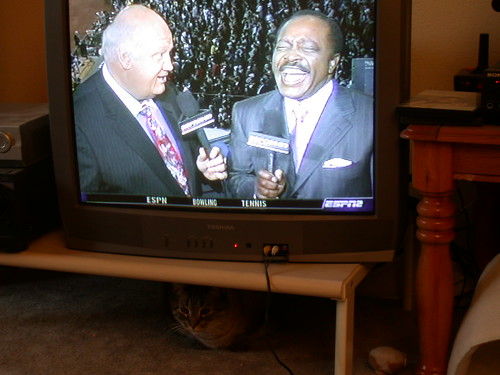 Hey, the season starts in less than four hours!

I did it in 2004, I did it in 2005, and courtesy of my current lack of employment, I’ll be doing it again tomorrow: sitting in front of a TV equipped with DirecTV’s free-for-the-first-week MLB Extra Innings package and watching the Opening Day games. As far as I can tell, I won’t have the opportunity to watch all 13 games that will be going on; Cardinals at Phillies and D-Backs at Rockies are missing from the DirecTV schedule, although last year I was surprised by one game unexpectedly being available. Also, unlike last year, there are night games scheduled — including a West Coast night game (Yankees at A’s at 7:00 Pacific time) — so I probably won’t make it through the entire day, but I’ll try to stick around at least through the conclusion of the Angels-Mariners game, and maybe even until the Marlins-Astros and Giants-Padres games wrap up, especially if all the jeers, boos, and taunts at Petco Park are making Barry Bonds weep openly.

And now, off to the supermarket to purchase the fixings for chili (for tonight) and tacos (for tomorrow night).