When I saw in hanger-on Dan’s photos of the Mets’ opening day that Shea Stadium’s replacement was already under construction, I decided I’d better hurry up and see a game there. Fortunately, a cousin had a wedding in the Philadelphia area on a Friday of a weekend when the Mets were in town, which made it relatively easy for me to get across New Jersey for a Sunday afternoon game. Better yet, hanger-on Maura and non-hanger-on Maggie were able to join me for the game, as you can see below (Maura left, me center, Maggie right)… 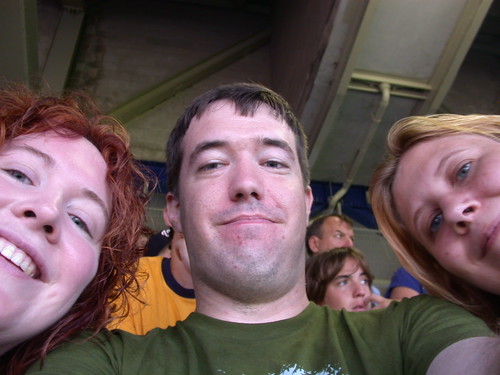 Shea Stadium as seen from the Willets Point-Shea Stadium elevated station platform. That’s the city parks department logo on the right. A boy behind me said, “The Mets are playing the Leaves today!” 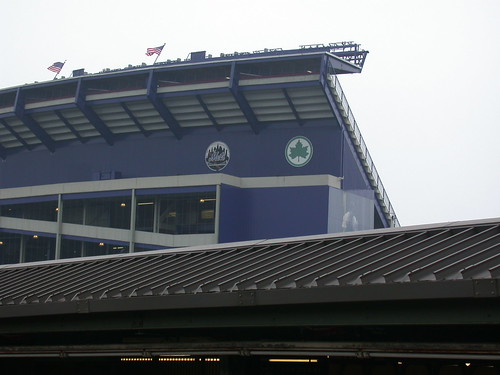 Yes, the new Citi Field is further along than it was three months ago. 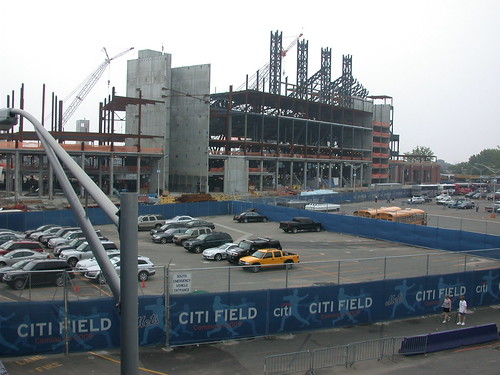 As it turned out after I’d taken the seat cushion all the way back to Philadelphia with me, it wouldn’t fit in the luggage I was carrying back to L.A. with me, so it now belongs to my cousin. (No, not the one who just got married, although that would have been a great wedding gift. Especially since he’s a Yankees fan.) 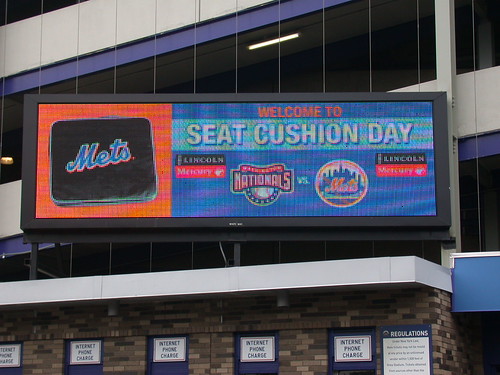 The view from our seats in the mezzanine level. Under cover, which was good, because it was raining off and on before the game, and then started raining again in the third inning. 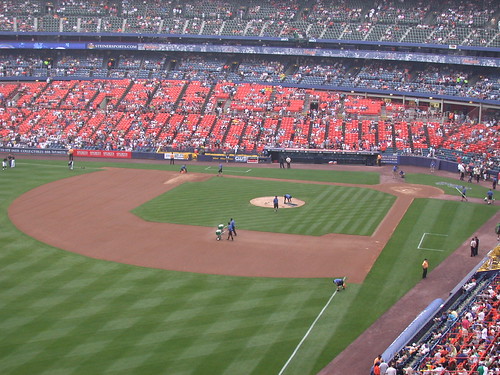 The skyline atop the scoreboard, which either needs some light bulbs replaced, or they’ve got a nice effect going there. 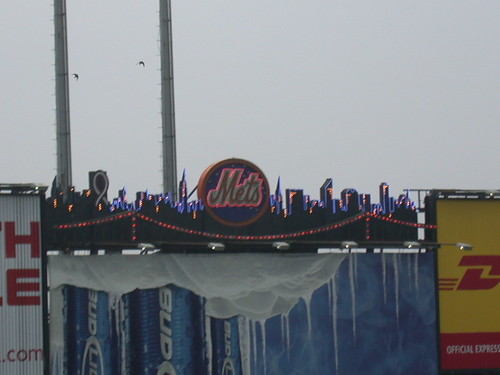 Between innings, they showed my employer’s stock price on a scoreboard, and everybody laughed. 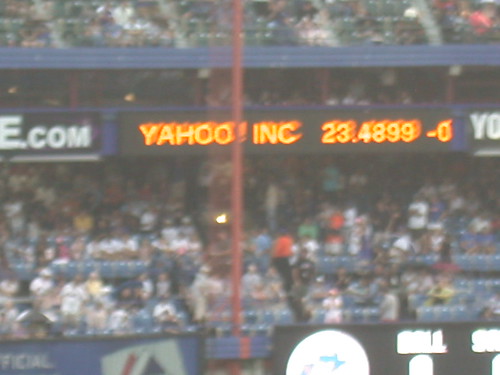 Ramon Castro hit a home run. Maura said she’s seen that apple-in-a-hat up close, and there’s a very thick layer of dust on it. 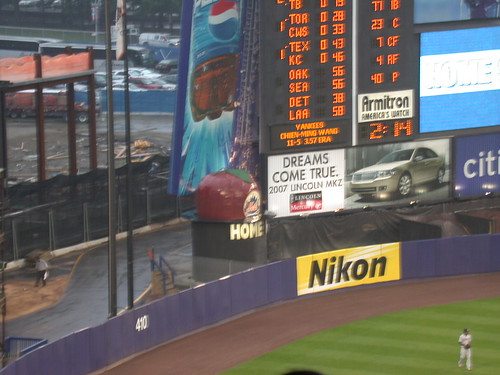 With the Mets ahead 5-0 in the bottom of the 5th, and the rain intensifying, it was time for the swarm of the guys in blue shirts. 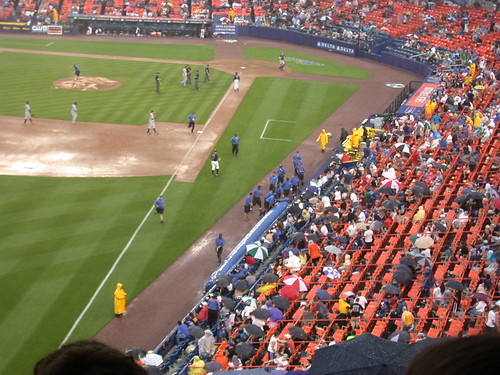 The guys in blue shirts all worked in unison to roll out the tarp, and to avoid running over any straggling Nationals. 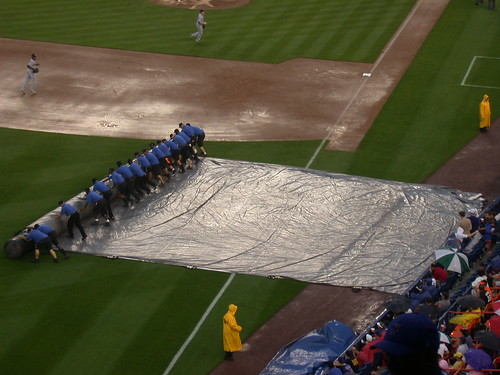 You’d think the Mets would have a blue tarp, but it’s white. Maybe the blue tarps are all (still) in the New Orleans area. 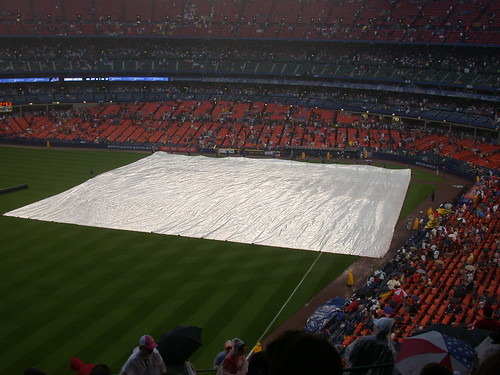 Maura, Maggie, and I walked around the stadium for a bit. They made a couple of announcements that the forecast was that the rain would continue for at least a couple more hours, but didn’t announce anything specific. 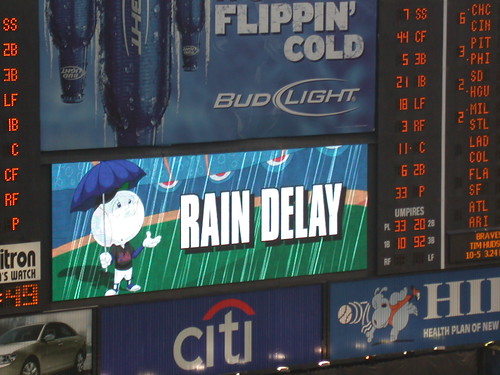 We eventually left, and found out via text message (from Dan at MLB.com) that the game had indeed been called. Mets 5, Nationals 0, in four and a half innings. It’s a complete game, so it counts, and I’ve now seen games at 18 of the 30 current MLB stadiums. Anyway, we ended up at a bar Maura knows in Manhattan. Actually, that’s redundant, because Maura knows every bar in Manhattan, or so it seems. 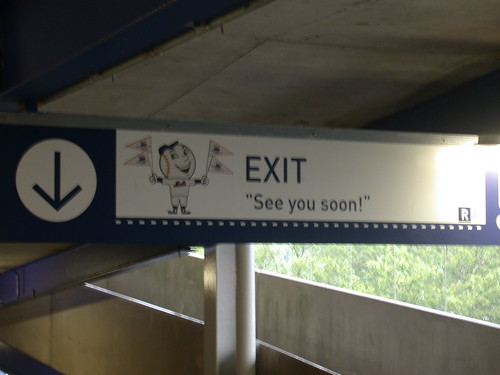