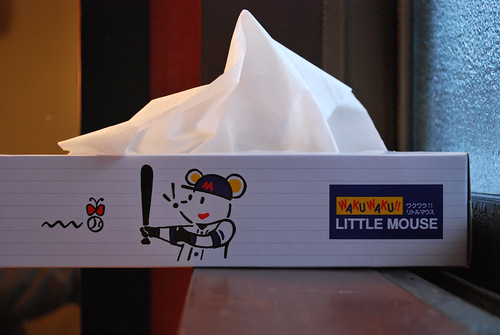 {Photo of an Ichiro mouse on a kleenex box in Japan taken by rocketlass.} From a New York Times article about Ichiro’s nine straight 200-hit seasons comes this quote:

“Chicks who dig home runs arenâ€™t the ones who appeal to me,â€ he said. â€œI think thereâ€™s sexiness in infield hits because they require technique. Iâ€™d rather impress the chicks with my technique than with my brute strength. Then, every now and then, just to show I can do that, too, I might flirt a little by hitting one out.â€

Two questions: 1. How can anyone not love Ichiro? 2. What on

earth must it be like to be his translator?

1. That was interesting having the starters enter from the stands, but instead of having them lined up in the aisle, they should all have been sitting in various places around the lower deck, and would have acted surprised when they heard their names called…you know, having to put down their hot dogs, maybe borrowing a glove from the kid next to them, whatever.

3. I know Suzuki is a very common last name in Japan, but why does Ichiro Suzuki get to rise to the level of Cher, or Pelé, and get only his first name listed in Fox’s on-screen graphics?

4. Seriously, Joe Buck is almost completely insane, and I’m certain that it’s all Tim McCarver’s fault. They need to be separated immediately before there’s an ugly incident in the press box, and by that I mean Joe Buck should stay where he is and Tim McCarver should be dropped on an iceberg somewhere in the Arctic.

5. Hey, Fox spent some money to upgrade Scooter’s animation since I last saw him! Great; that’s money that could have been spent to teach illiterate kids to read, or to increase the salary of a certain “Malcolm in the Middle” writer.

Toby: I couldn’t agree more about dropping McCarver!! And that’s a great idea about introducing the starters (kind of like a “Price is Right” intro).

Does anyone else remember when Vida Blue played and he had just “Vida” on the back of his uniform?

Levi: I’ve always liked Ichiro!’s first-name-uniform thing in part because of Vida Blue, who was before my time as a fan, but whom I’ve seen in photos.

And I agree wholeheartedly with Jim and Toby about McCarver. I used to like Joe Buck when he was just a kid doing Cardinals broadcasts. He was modest and straightforward and obviously had grown up listening to his dad and Moon Man Shannon. But a few years with McCarver and he’s completely around the bend.

Steve: 1) How about Piazza getting his revenge by tipping pitches? “Hey Manny, here comes the fastball.”

2) I watched the game with the sound off mostly but it was quite awkward to see them give Clemens whatever award he got in the middle of the game.

3) Fantasia and Ruben both suck!

4) I know its the all star game and the AL was leading and all but talking to the manager in the dugout while the game is happening is just plain wrong.

5) I guess Taco Bell just wrote off that million dollars they gave away since that fat guy who throws as hard as Matt Morris was still able to hit a target the size of rhode island. Where’s the drama.

Dan: I was hoping at the last minute there’d be a mixup forcing Muhammad Ali to sing the national anthem and giving the first pitch to Fantasia.

And I’ll say this much.. good thing Piazza wore a catchers’ mask, because I sure bet he was smiling underneath it as the AL rocked Clemens.

Jon Solomon: Comcast has taken to talking to Lary Bowa in the dugout in the middle of certain (non-exhibition) Phillies games. It just isn’t right.

Secho: A couple of weeks ago I was watching a White Sox telecast and they had an in-game interview with Ozzie Guillen, and Hawk prefaced it with something like “I hate that we have to do this in the middle of the game but I guess we do” and then handed it off to DJ who threw some softball questions at Ozzie for 2 or 3 minutes. (BTW, I hope Hawk clubs Mariotti upside the head the next time they cross paths) The whole thing just seems so forced as to counteract any possible insight you can get from the dugout mid-game.

How about Ali throwing up the bunny ears behind A-Rod during the team photo? Good stuff.

Dan: Ali really was the perfect guy to have there, considering his long, righ ties with the game of baseball as well as the city of Houston. Nolan Ryan — you know the guy they had as the Taco Bell pitching coach? — now HE’S a guy that most certainly had no business being there at all

Jason: I didn’t watch the game. Did I miss any shots of Calista Flockhart eating a hot dog?

Levi: I would think that in these worried days of FCC crackdowns, a broadcaster might think twice about interviewing Larry F’in Bowa.

Buck and McCarver interviewed Steve Kline during Saturday’s game, and it was actually kind of fun. On a couple of close plays, Kline said, “Oh, he was out, obviously out,” and Joe would say, “No he wasn’t, Steve.”

And in reference to a statement McCarver said about muscle weighing more than fat, Kline said, “Well, then that bacon I had for breakfast this morning must have had some muscle on it.” And on why he doesn’t stretch much: “I learned that you can’t tear fat. So you don’t have to stretch.”