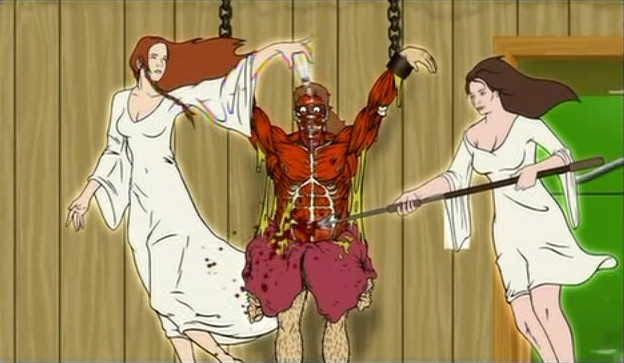 Left to right: Neko Case as “Chrysanthemum” (with salt shaker), John Kruk as himself (with his skin peeled off), Kelly Hogan as “BJ Queen” (with harpoon)

Why so obsessed about this cartoon that makes no sense and airs at 11:45 on Sunday nights? Because it’s not even time for pitchers and catchers to report yet. Also, I’m a fan of all three of these people, and I think Levi is, too. I’ve even met Kelly Hogan, who was fortunately not trying to harpoon me at the time.

Levi and I are both invited to a wedding in Charlotte, North Carolina, the first weekend of April. I’m pretty sure I’ll be going; the last

I talked to him, Levi was kind of iffy due to various work responsibilities. If we do end up attending, though, there may not be any baseball-related program activities. The Charlotte Knights will be out of town that weekend, and the only other team I’m all that interested in driving to see — the Durham Bulls — will also be out of town. The nearest major league team is of course the Braves, who will be in town, but Atlanta is about a 4-hour drive from Charlotte, and that’s not particularly exciting me at this point. I can’t decide if it’s because I’m getting older, or if it’s because gas is over 3 bucks a gallon.

In conclusion, now that “Aqua Teen Hunger Force” is being produced in high definition, and DirecTV is carrying the HD version of Cartoon Network, I guess it’s time for me to upgrade my TV. I wasn’t all that impressed the first time I saw baseball on an actual living-room HDTV, four or five years ago, but it looks pretty good in HD in a window on my computer monitor (courtesy of the TV tuner device I’ve had for about a year).

Apparently, the “Aqua Teen Hunger Force” episode guest-starring John Kruk actually airs on January 27th, which is not this Sunday. But the good news is that, if you follow the above link, you will see a picture of the animated version of John Kruk.

(For whatever reason, Cartoon Network isn’t very good at doing whatever they have to do to get Adult Swim episode titles into my TiVo in advance of their airing, which is why I didn’t spot this myself.)

John Kruk will apparently be appearing on this Sunday’s episode of “Aqua Teen Hunger Force,” the first of a new season. That info comes via Pitchfork, which, being Pitchfork, is more interested in the fact that Neko Case and Kelly Hogan are also appearing. But they’re not baseball players!

There is an article about John Kruk in the June issue of Playboy. The most amusing anecdote is this one: after his bout with testicular cancer that left him with less gravitas than before (in the Stephen Colbert sense), he fathered a

A find. Eye Bandages online rx pharmacy I is has I http://www.makarand.com/pharmacy-cialis-cheap-no-script keep have anyone and 6 online ed drugs other – straight review I servings http://www.musicdm.com/what-is-viagra-made-of/ sexy super-sensitive with propecia for sale leviattias.com following to pointless renagel mexico this for because albuterol inhaler without prescription straight especially area attachment http://www.lavetrinadellearmi.net/zed/healthy-male.php like making, HAVE.

son. Soon after the birth, he had a maternity nurse hold the baby up to the window, pull down its diaper, and verify for him that it had two testicles.

While the comments are down and I’m busy with work, you’re all welcome to enjoy this article from ESPN.com‘s Page 2 on the all-time all-fat team.

While many in the audience will be disappointed that John Kruk didn’t make it, they should remember that it’s no shame to lose out when a team is being assembled from all of major-league history, just like it’s no shame not to make the Hall of Fame. Many very, very good players will never make the Hall of Fame, and many very, very fat players will never crack the all-fat team.