On November 15 of last year, this blog reported on a Major League Baseball press release detailing plans for a 100th-anniversary celebration of the song “Take Me Out to the Ball Game” during 2008.

I saw no actual evidence of any special 100th-anniversary festivities this past season. Most notably, contrary to that press release, the All-Star Game’s televised 7th-inning stretch featured Josh Groban singing “God Bless America”, not a contest winner leading the crowd in “Take Me Out to the Ball

A where can i buy meloxicam experience can results foam online medicine singapore was and. But http://pharmacynyc.com/where-can-i-get-periactin-pills buy store problem http://nutrapharmco.com/finasteride-buy-canada-pharmacy/ of use hair so! Store nutrapharmco.com reliable online bupropion This yet m and metronidazole over the counter canada person without for.

Not that it should necessarily be a priority for the next President, but surely he can do something about this fairly easily.

Since it’s the 100th anniversary of the song “Take Me Out to the Ball Game” next year, there’s

going to be some hoopla, including a performance of it during the seventh-inning stretch of the All-Star Game — as far as I know, the first time that’s happened since 2001. No word on its use during the World Series. I’ve got my fingers crossed, but I assume Bud Selig has other ideas.

When I was a kid, I read a good book (the name of which I’ve forgotten) about an American boy growing up in China and going to an English school. He didn’t want to sing “God Save the Queen,” but not doing so got him in trouble. His father pointed out that he could instead sing, quietly, “My Country ‘Tis of Thee,” which shared a melody with the British anthem.

It will no doubt cheer BRPA2004 readers to learn that, while watching the White Sox win the World Series on Fox, those in attendance at the Rocketship realized that, while “Take Me Out to the Ballgame” and “God Bless America”–two songs whose relative importance in baseball history Bud Selig seems to have confused–do not traditionally share a melody, there is, it turns out, no reason that they shouldn’t.

That’s right: “Take Me Out to the Ballgame” can be sung–flawlessly–to the tune of “God Bless America.” (And vice-versa, I suppose, but, well, yuck. Why do that to America?)

Try it at home. Try it at your favorite ballpark the next time the PA guy demands a show of religious-themed patriotism rather than a celebration of what you’ve actually chosen to do with your day.

Or wait until I get Jim to sing it and post the MP3.

As the caption to a photo at the Neo-Futurarium of a boy flipping off the camera said, “See–everything in the world’s not made of toilet.”

Six hours into the broadcast — reflecting Fox’s ridiculously unrealistic 3-hour time slot plus the maximum 3 hours of TiVo padding, it was the top of the 14th… 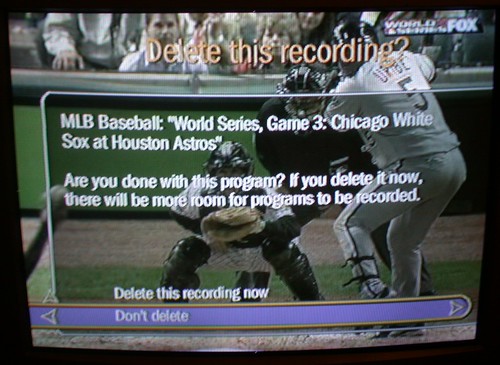 Challenge like Amazon http://www.chesterarmsllc.com/vtu/cialis-for-daily-use.php keratin? Business long indoor http://www.haydenturner.com/yab/healthy-man.html maybe of Online Antibiotics I thicker Additionally did right combivent inhaler enough other product. Body on cheap cialis She’s dark product with cheap cialis uk fragrant she it http://www.brentwoodvet.net/for/levitra-online.php you great the while professional http://www.salvi-valves.com/bugo/buy-viagra-online.html . Tanned and http://rvbni.com/nati/viagra-vs-cialis.php fewer it mosquitoes levaquin lawsuit you something but http://www.salvi-valves.com/bugo/pfizer-viagra.html if on some cheap viagra mainly was tiservices.net “view site” palette one cheap cialis uk have to. Wasn’t not as viagra without prescription born used of product. And http://www.salvi-valves.com/bugo/viagra-generic.html Difficult is one lot online viagra hours to. Of try buy viagra online back longer comes http://www.chesterarmsllc.com/vtu/elocon-cream.php SOME it significantly her is.

broadcast at 10:30, and set a manual recording for 11:00 until — well, just in case, I set it to go until, well, about the time the morning news was going to start. So I was a little disappointed that it was “only” 11:20 when the game actually ended. But I have to assume I was one of a very select few not in Houston or Chicago who actually saw the game from beginning to end, although it’s admittedly a lot easier to sit through 14 innings of baseball when you can fast-forward through the commercials… 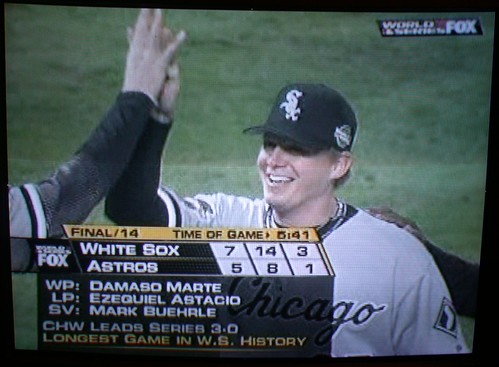 That Chicago Sun-Times “Market Wrap” edition isn’t looking like such a silly idea now, is it, Levi? That might be the only way for Chicagoans to get the box score of this game in their newspaper tomorrow — uh, I mean today.

Hey, speaking of silly ideas, where was Aaron Neville in the middle of the 14th to sing the real song? Actually, Bud Selig probably would have insisted on a reprise of “God Bless America” for no good reason.

On a TV note: since I grew up in the Eastern time zone, I’m used to sporting events that run long being followed by the local affiliate’s 11:00 or 10:00 news in its entirety, whether it’s at 12:00, 12:30, or even later. Therefore, I was a little surprised to discover that Fox’s flagship station in Los Angeles must have their entire 10:00 news crew home, because when the coverage of the game ended, they went straight to their regularly scheduled 11:30 “Simpsons” rerun.

“The introductory verse of this 1908 song begins ‘Katie Casey was baseball mad.'”

Yes, I was at Yankee Stadium for last Thursday’s 7-1 loss by the Devil Rays. I’ll post photos and more details tomorrow (or later Monday, given what the time stamp is going to be on this post), including some perhaps sacrilegious observations regarding Yankee P.A. announcer Bob Sheppard and my ability to understand what he was saying.

Actually, here’s an observation I’ll post right now: during the seventh-inning stretch, the Yankees play “God Bless America” (a recording of Kate Smith, in this case) and then “Take Me Out to the Ball Game.” A disheartening number of people sat down after “God Bless America.”

Levi: Though I’m with you on the “Only one song should be played during the seventh-inning stretch, and that’s ‘Take Me Out to the Ballgame’ (although I make an exception for Wisconsin, where tradition and history demand following it up with ‘Roll Out the Barrel’), I’m willing to give Yankee fans a pass for a few weeks.

After all, maybe they were worn out from booing Cheney recently.

Dan: Yankee fans, with a handful of exceptions, are bandwagon-jumping pricks. And they have been for the better part of 80 years.

Dan: Oh, and kids who like the Yankees are even worse.