For Memorial Day today, Jason and I made a trip up to Lancaster to see the Lancaster Jethawks play the High Desert Mavericks. Because Jason was unsuccessfully trying to round up more people to go, we got a late start and didn’t get there until the middle of the 4th inning. We didn’t miss any runs, however; the Jethawks scored their first two runs in the bottom of the 4th, two more in the 6th, and three more in the 7th. So it was 7-0 going into the top of the 9th, and the Mavericks managed to mount a rally, getting three runs with 2 outs, then having the bases loaded — but it was not to be, and the final score was 7-3.

From today’s Tribune, a story about three guys being charged in a brawl outside the ballpark Sunday evening.

The two highlights of the story:
1) The guy they attacked, who was running a memorabilia stand, at the start of the verbal altercation identified himself as a police officer, off-duty . . . then the guys attacked him.

2) The last sentence of the article points out that police suspect alcohol to have been a factor in the incident.

Levi saw the Cardinals win in New York today. Hope he didn’t get spit on by any Mets fans, although if they hit his grungy old Cardinals cap, who could tell? Ha ha!

Still 4 hours and 55 minutes until the start of tonight’s Dodgers game, for which I will be in attendance.

Normal train service has resumed between New York and Newark.

As far as I know, Levi is in New York right now. He tells me he’s going to the Mets-Cardinals game on Saturday (and I’m going to the Dodgers-Braves game here in L.A. on Saturday).

Now, he’s with his wife and some friends from the U.K. Their plans were to rent a car and drive from Chicago to New York (and then back) so the British folks could see the country, or at least what one can see from the Interstate between Chicago and New York. Since even Levi knows a car can be a liability in New York, I first suggested two one-way rentals, but those were ridiculously expensive. So my other suggestion was that Levi park the car in New Jersey near public transportation, and the only good place I could come up with where he could definitely park it overnight and it would be reasonably secure was the long-term parking lot at Newark International Airport.

I gave Levi careful directions for how to get from the airport to the apartment the group is renting near Columbus Circle, via NJ Transit commuter train and subway. They were supposed to arrive this afternoon sometime.

This evening, this happened, on the very train tracks Levi would have been traveling over between Newark and New York. Perhaps Levi has started smoking, and threw his cigarette out the window when he saw the conductor coming. At any rate, I certainly hope Levi was safely in New York by that point, since my careful directions did not account for the possibility of trains not running due to a fire!

Levi: The fire occurred about an hour after we crossed, right around the time I was praising Jim for giving us flawless directions that were easy to follow, and about four minutes before the crazy woman from whom we rented an apartment started hollering about how she wasn’t told there would be four people staying there.

Big Ben: For future reference, the terminus of the Gladstone Branch of the NJT Morris & Essex lines (Gladstone Station) has free parking. I’ve parked there for as many as five days with no trouble. It’s not necessarily secured, but it’s in a quiet New Jersey ‘burb that feels pretty safe. The Summit station on the same line has paid ($5/day) parking that is probably a little more secure.

levi probably already told you, but we passed over that bridge two hours before the fire. and he probably also told you that on the way home we stopped in philly to catch the cardinals again!

Since I posted a couple of weeks ago, the Nationals had fallen a couple of games out of first place in the NL East, but the Dodgers were still atop the NL West.

There have been a few changes at Dodger Stadium since last season — other than three-fourths of the players on the field — and perhaps the most dramatic one is one I didn’t get a picture of: tickets are now being scanned at the gate instead of torn.

The blue seats up front are new… 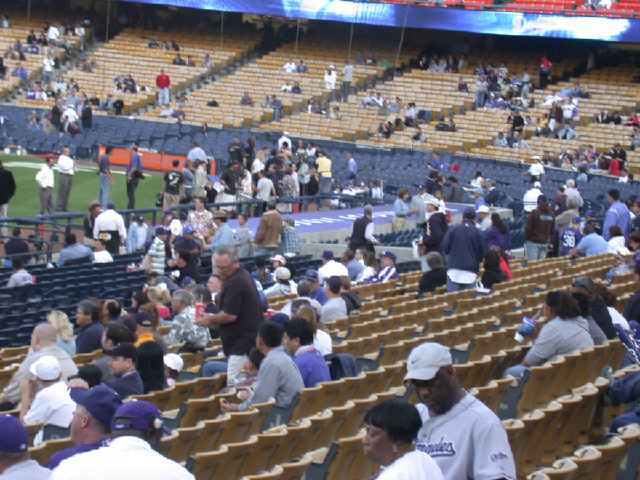 This new LCD ribbon board goes all the way across the front of the loge (second) level, displaying all the latest in advertising, and probably some scores, if you can find them… 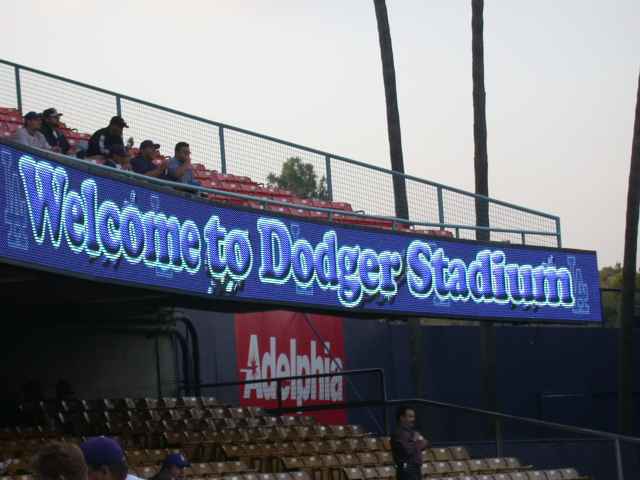 And there are smaller LCD displays next to the field for more advertising, replacing those old-fashioned “roller” displays… 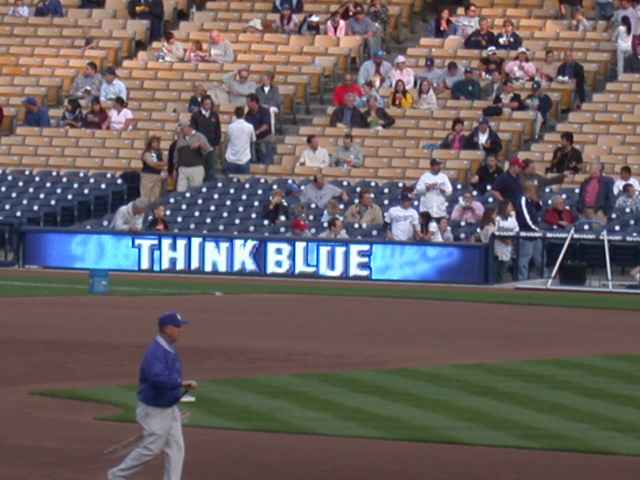 And there was a new logo on the scoreboard… 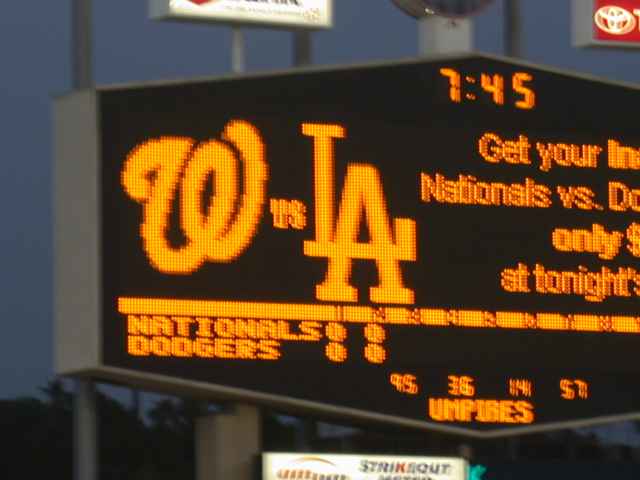 The advertisement is for a special “Dodgers vs. Nationals inaugural game” T-shirt that was being sold for $30. Hey, they’ve got to pay for the new LCD displays somehow. What wasn’t new was the “ANA” designation for a team that everyone else is abbreviating “LAA”… 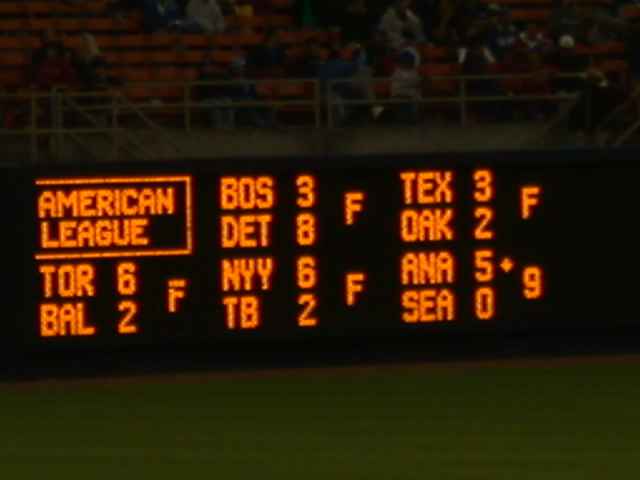 What I didn’t get a picture of, because there was nothing to see, is the fact that the Dodgers are saving 10 cents a letter by not putting players’ names on the backs of their uniforms. Also, I was distracted by the advertising on the new ribbon board. So I guess there was a game at some point, and here’s the final scoreboard… 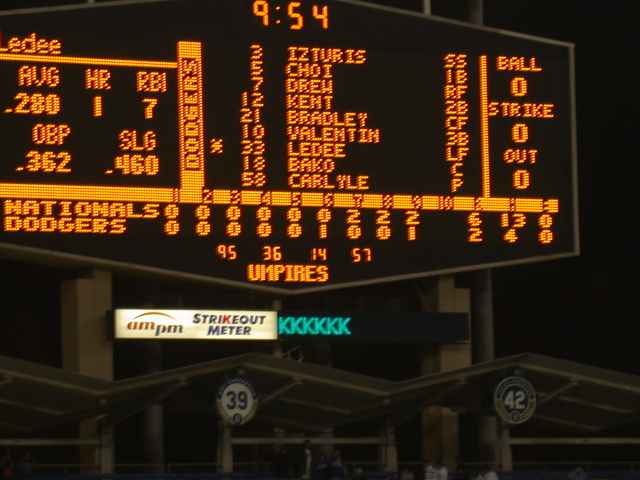 thatbob: Look look look! As of today, 5/6/05, the White Sox have a .750 record! And the Yanks are tied with the Wuss Wusses for last place in their division! Incredible!