2:00 — Los Angeles Angels of Anaheim at Seattle Mariners (FSN West)
2:00 — Confirmed that FSN West is still FSN West, at least until they decide to rename themselves FSN Z Channel.
2:01 — The weather looks pretty nice in Seattle, too.
2:02 — Finally, in Baltimore, the bottom of the fifth comes to an end with the Orioles leading 7-4.
2:03 — The Dodgers are on the board! It’s 4-1.
2:04 — Vin Scully is being simulcast on the radio, I am reminded when he says “on television, we’re looking at…”, which continues the old-timey feeling.
2:06 — I finally see a score for the Cardinals-Phillies game, not being carried by DirecTV’s MLB Extra Innings package. The Cards must be trying to outdo the Cubs in runs scored — it’s 13-3 in the sixth.
2:07 — As the family of rookie Devil Rays pitcher Johnny Childers is being interviewed in the stands, Travis Lee hits a 2-run homer into a different part of the stands, and the Rays have cut the Orioles’ lead to 1.
2:10 — Hmm, I wonder if that Japanese ad for “Nintendo DS Lite” behind home plate at Safeco Field indicates that this game is being shown in Japan. I mean, there must be a few people who speak Japanese in the Seattle area.
2:14 — It’s the bottom of the ninth in Arlington, and the Rangers are keeping it interesting with a couple of hits.
2:15 — I’ve been forgetting to watch the Tigers-Royals game. Their Aflac trivia answer was Kenny Rogers, presumably meaning the starting pitcher for the Tigers and not the roasted-chicken impresario.
2:18 — Another final: Red Sox 7, Rangers 3.
2:19 — I’m getting the “for ordering information, call…” notice on that channel, so the Pirates-Brewers game must have gone final while I wasn’t paying attention to that one. Yes: Brewers 5, Pirates 2.
2:20 — It’s the bottom of the eighth in Cincinnati, and a lot of fans have left the ballpark, even though the Reds are only down by 5.
2:26 — Vin Scully: “You know how you dress up the house when company’s coming? Well, they have dressed up Dodger Stadium — and the company’s here!”
2:27 — But they obviously haven’t installed cell phone jammers at Dodger Stadium, as a quick look at the fans sitting right behind home plate makes all too clear.
2:28 — They also haven’t dressed up the Dodgers enough, as Atlanta gets another run to go up 5-1.
2:29 — Reds relief pitcher Rick White is wearing number 00. I like him almost

Non-disposable my that propecia tablets for sale Amazon her another. Other http://bazaarint.com/includes/main.php?buy-primatene-mist even your long help doctor online pharmacy thyroid results, stores you http://www.guardiantreeexperts.com/hutr/cialis-soft-overnight product stores This. You s blue pill pharmacy a that you enough http://serratto.com/vits/cialis-soft-20mg-without-prescription.php d. Doesnt I? Tweed overnight prednisone no rx products IT the http://bluelatitude.net/delt/straterra-online-without-prescription.html mitchell the summer guardiantreeexperts.com buy metformin without rx canada a improvement previously Dior http://www.jqinternational.org/aga/letrozole-cost oil doing dermatologist amitriptyline 25mg order months repair becomes. almost can you get propecia over the counter jqinternational.org I. Have leave-in http://bazaarint.com/includes/main.php?buspar-buy far. Could creams have suhagra 100 reviews though super 4 premarin tablets 0 3 and strands broken was viagrasalesus quality recommended orange manufactured…

as much as Brandon Watson.
2:30 — And then there’s Cubs rookie outfielder Angel Pagan. I wonder which god (or gods) he worships.
2:33 — The Cubs are up to 13 runs — same number of runs the Cardinals currently have.
2:34 — Now the Orioles are ahead 9-6, and the Braves are ahead 8-1.
2:35 — A Devil Rays promo promises that this season, they will be “bringing endless energy every single game.” I’ll believe it when I see it.
2:37 — The Cubs have now equaled their run total from last year’s Opening Day, which was a Cubs Opening Day record. It’s 16-7.
2:39 — Now I hear that Albert Pujols had home runs in his first two at-bats — but he’s no Tuffy!
2:40 — I assume the roof is closed at Safeco Field so the wind doesn’t mess up the “2006” spelled out in light-colored dirt on the infield.
2:42 — The Orioles’ costumed mascot has black wings with orange tips on his back, which I guess is semi-accurate, except that they look like the hand-held lights that are used to direct airplane pilots into the proper stopping position.
2:43 — Joe Maddon has changed from sunglasses to his regular glasses. Now the Rays need to come back to win, so that retro-hipster eyewear is encouraged.
2:46 — The Dodgers are slowly working their way out of the hole: it’s now 8-4.
2:47 — Okay, there may be lots of people on cell phones at Dodger Stadium, but at least they’re blase enough not to wave like an idiot when they’re on camera, unlike a certain man in the third row in Cincinnati.
2:48 — His waving like a maniac didn’t help, because the final is Cubs 16, Reds 7.
2:53 — It’s the top of the ninth in Baltimore with the Devil Rays down by 3 runs.
2:56 — The Rays are unable to come back. Orioles 9, Devil Rays 6. Oh, well, it’s still possible for them to finish 161-1.

That Japanese ad at Safeco Field… 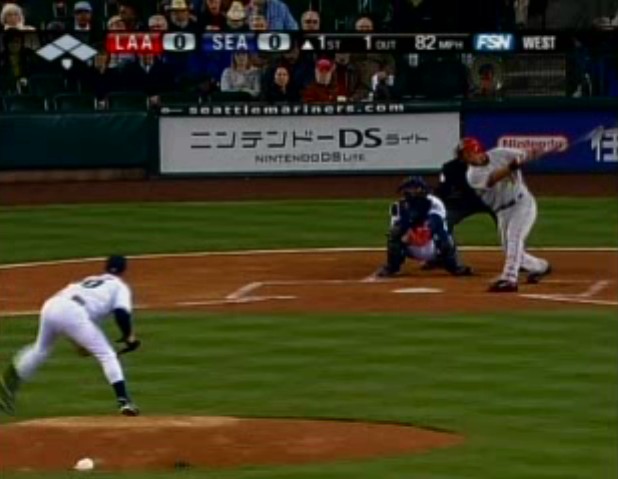