Comerica Park in the midst of desolate Detroit.

I don’t think AAA would approve of staying in a hotel that has chunks of plaster all over the floor and pigeons roosting inside. But maybe I’m wrong. Their 2004 Tourbooks come out in April, so I’ll pick up the one for Michigan when I have the Triptik made and see how many “diamonds” they give the ol’ Book Cadillac.

While we’re on the subject of Detroit, just the other night, I watched an HBO documentary called “A City on Fire: The Story of the ’68 Detroit Tigers.” The part about the World Series might make Levi depressed and morose, but I enjoyed it. Our next baseball trip after this one needs to involve time travel.

It actually contained some content relevant to our National Anthem discussion: Mickey Lolich complaining about how long it took Jose Feliciano to get through “The Star-Spangled Banner” at the beginning of Game 5, and several other interviewees, including Ernie Harwell, talking about all the complaints received about this unique take on the anthem. It sounded fine to me, although they didn’t play the whole thing uninterrupted in the documentary, so I couldn’t tell exactly how long it went on for.

The birth of this blog prodded a couple of people to put their names into consideration as official hangers-on. Luke wants to go to Davenport and St. Louis, and Maura wants to join us in Pittsburgh in addition to Philadelphia, so I certainly hope she enjoys the Pennsylvania Turnpike. I have updated the itinerary with details of their attendance.

I read the itinerary this morning, Jim, and I have but one quibble. You say that we’ll stay in a hotel in Detroit.

Have you forgotten that there are half a million abandoned buildings in Detroit? Many of them are even hotels! Why pay for a dinky room in a chain motel when you could stay right downtown at the Book Cadillac Hotel?

Weâ€™ve already had floods (the heavy rain along I-94 through Michigan) and cats and dogs lying together (at Leviâ€™s parentsâ€™ house), so what was next?

The fire alarm went off in our hotel here in Detroit at 1:15 A.M. Actually, it was a recorded voice telling us to assemble near a fire exit. After the announcement had gone through a couple times, it started going into a mode where it would play part of the announcement every 30 or 45 seconds. â€œAttention! There has been â€“ â€œ â€œ â€“ not use elevators â€“ â€œ â€œ â€“ await further â€“ â€œ

Levi and I decided that since we were only being told to assemble, we could make it to the stairs pretty quickly if need be, so we stayed in bed. Levi eventually put on a shirt and looked out the window, but presumably he didnâ€™t see any fire trucks or other emergency vehicles. At 1:30, they finally figured out how to turn the alarm off, just as Levi was calling the front desk to see if weâ€™d ever be able to get back to sleep. It was probably dust from an abandoned building getting into a smoke detector somewhere.

Patti Stahl: I still don’t understand why you didn’t take me with you!

Tom: What’s the deal, there are no updates since yesterday am?

Jason: The Toronto earthquake must have disrupted service. Or they’re stuck in line at Tim Horton’s. 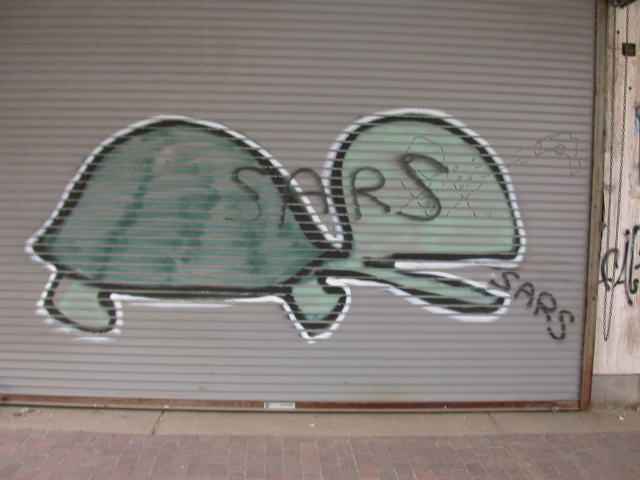 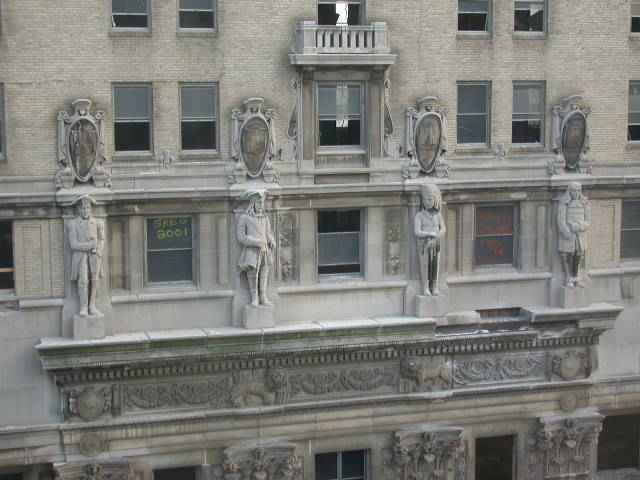 Outside Comerica Park, an old-school sign, as if someone’s going to be driving by and decide to stop in for the game… 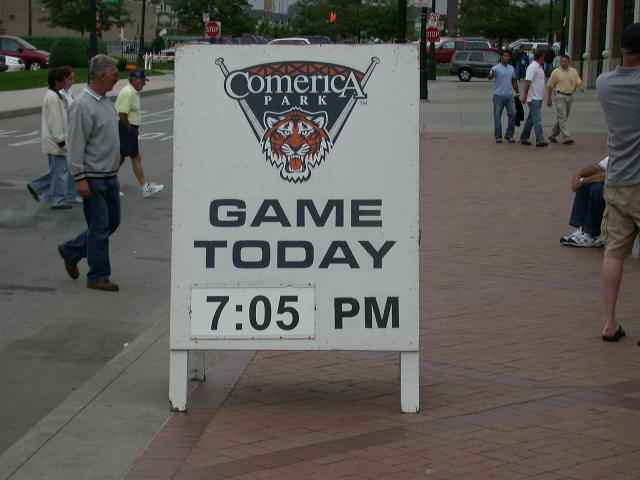 Look out! These people are about to be pounced upon by a tiger! 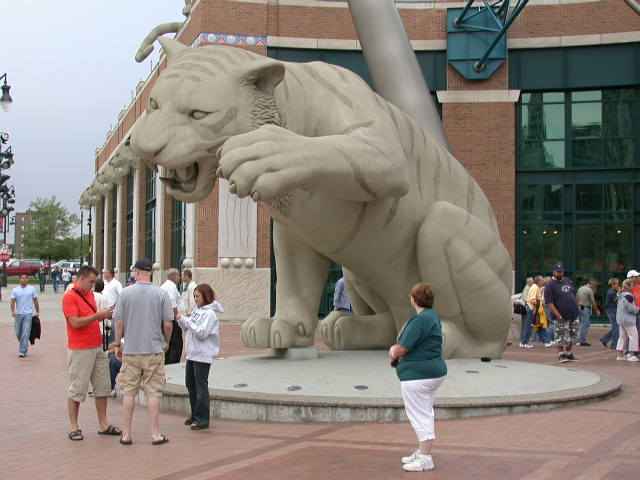 Entrance to the park… 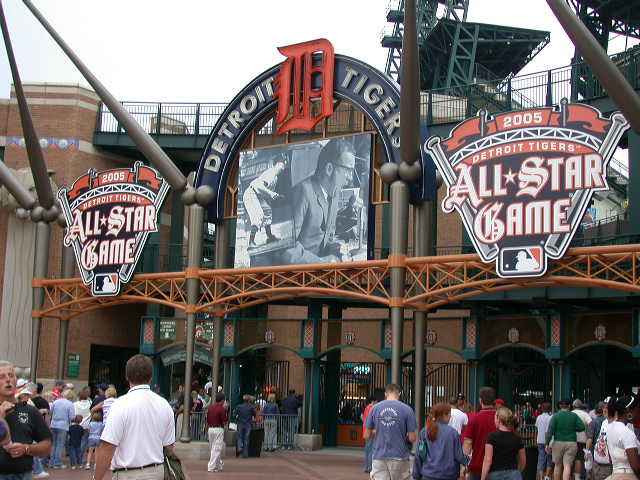 General Motors Fountain, complete with two cars way up there… 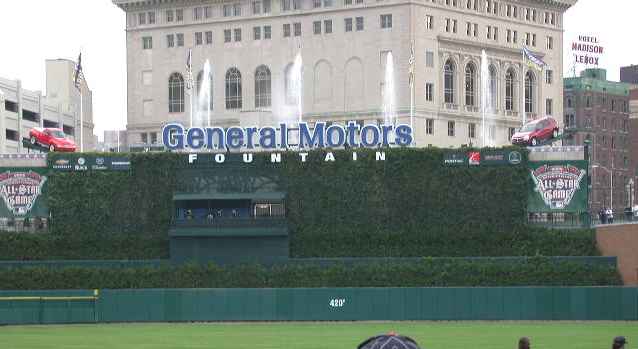 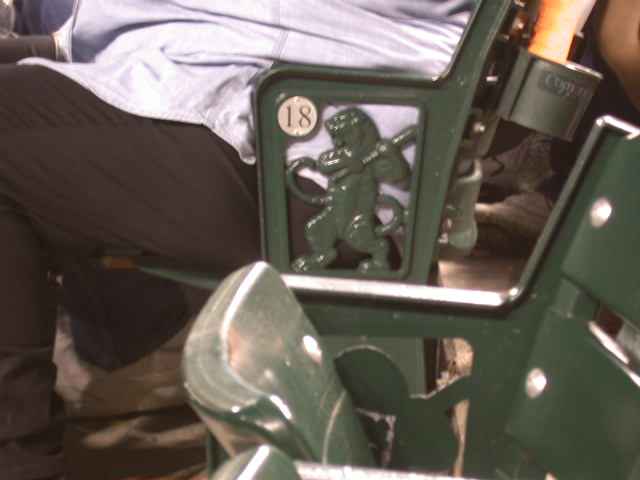 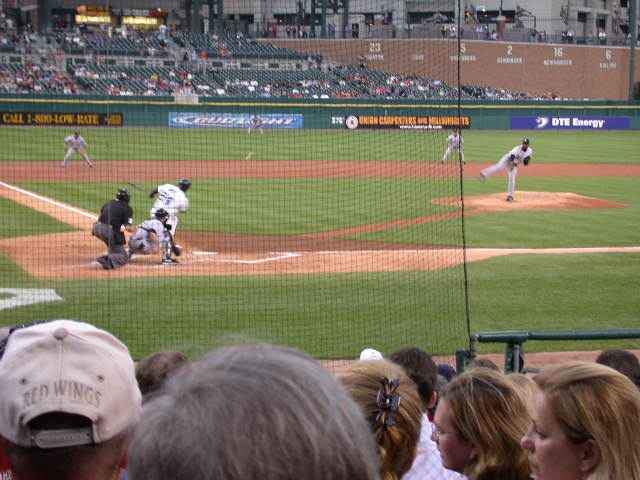 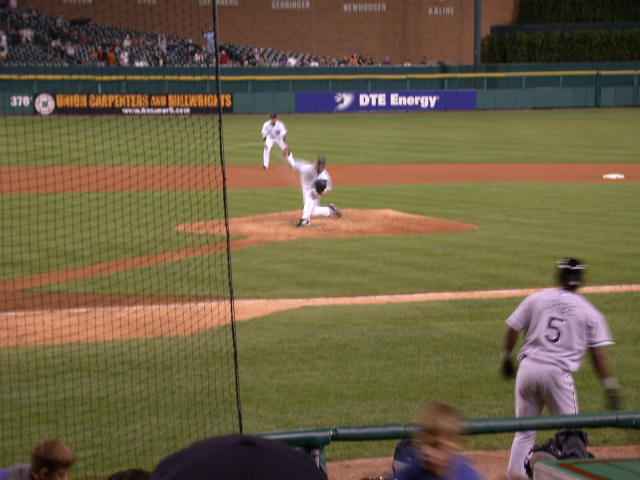 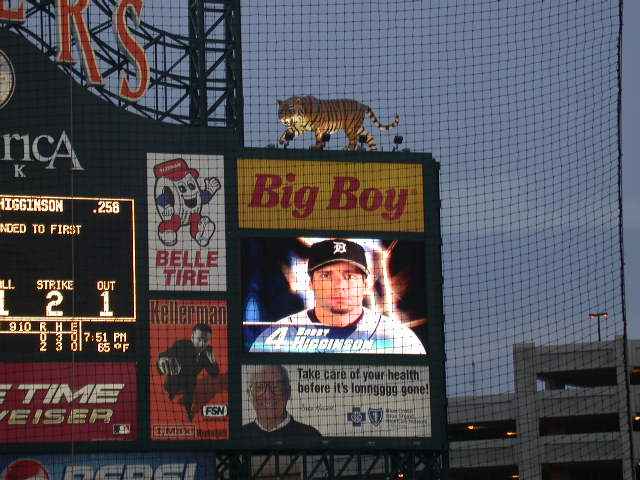 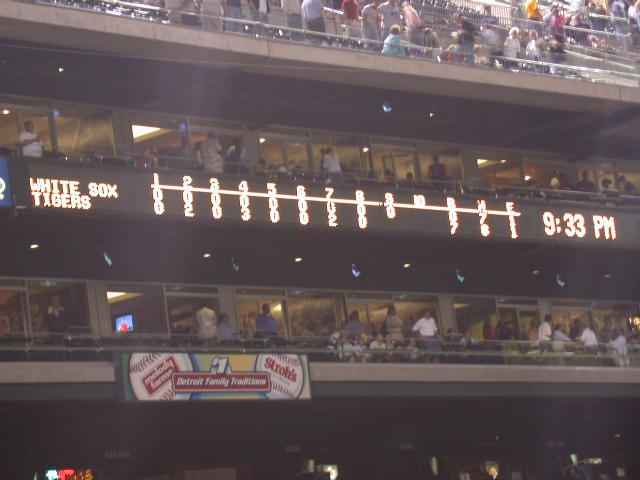 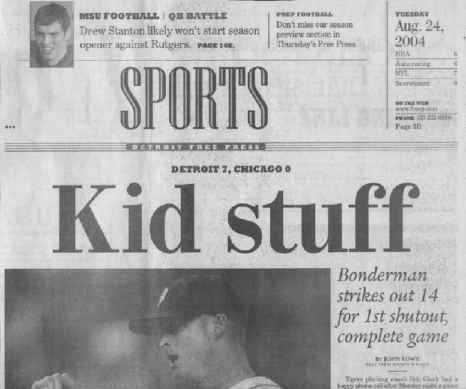 This morning, we bageled up at the Stahl household, then left my parents–as well as two cats, the stinky dog, some fish, a hummingbird, and an owl that went â€œwhoo-oo-ooâ€ all night long–behind and hit the road bright and early, counting on Jimâ€™s playlist of #1 hits to carry us through. And carry us through an uneventful morning they did. We dropped Stacey and Luke at the University Park Metra station a full ten minutes before their standing train was due to depart. They left us with good wishes and the remaining dozen Hostess Baseballs.

We passed through the Slough of Despond, or northern Indiana. We crossed into Michigan, where, like the welcome center in Florida that gives travelers free orange juice, they were giving out paper cups of motor oil. In Michigan, a pattern developed: road construction followed by light rain followed by heavy rain followed by traffic being slowed to a crawl by a wreck ahead. Like a driverâ€™s ed class following a Troy McClure film, we took heed and drove with caution.

Yet we arrived in Detroit right on time. Jim took us into the city on Michigan Avenue, so that we would go by Tiger Stadium. The old ballpark looks a bit run down, but itâ€™s still impressive–huge and boxy and white. A ticket booth remains right on the corner, but there are no tickets to be had.

Detroit itself, meanwhile, is as depressing and hard to believe as I imagined. Street after street is deserted, storefronts are boarded up, windows are broken. A few businesses here and there are hanging on–the Refrigerator King, a few liquor stores, a surprising number of antique-looking antique stores–but even the extant businesses appear to be holding on only by cutting costs to the bone, deferring even the most basic maintenance, from painting to repairing broken signs. (Side note: one thing that was odd for me, simply because Chicagoâ€™s truly poor neighborhoods are so segregated: the people on the street were about an even mix of white, black, and Latino.) Once we entered downtown, the picture went from sad to surreal, as abandoned storefronts were replaced by abandoned deco skyscrapers. Across from our hotel is a derelict twenty-story building with detailed stonework and statues of knights at about the tenth floor. And downtown seems to be like that just about everywhere; I saw a sign on a building that said, â€œBuilding available,â€ and I thought it was awfully optimistic.

The ballpark, on the other hand, is surprisingly pleasant. Sitting in the 18th row just on the first-base side of home, we were a bit spoiled. The upper deck–my usual haunt at a ballpark–does look like it might be all the way back in the Central Time Zone, so I canâ€™t fully vouch for the ballpark, but it was a great place to watch a game from the high-roller area. The stadium is very open, with a view of downtown and a lot of sky, a silly fountain (The General Motors Fountain) beyond center field, and statues of Tiger Hall-of-Famers on the concourse in left. I was even able to get a reasonably good vegetarian pita with rice pudding for dinner, which saved me from the wrath of Little Caesarâ€™s, the house pizza. Jim supped on a Kowalski kielbasa–and, as we learned later, â€œKowalski means Ko-wality!â€

Oh, and the game! I had decided beforehand that since the Sox are doomed, I was free to root, root, root for the home team. It was a good night for it, as Jeremy Bonderman, apparently leaving his 6.07 E.R.A. at home with the wife and kids, absolutely baffled the Sox. He threw mostly inside curves and slowwwwwwwww changeups. Then, when the hitters would start looking for the slowwwwwwwww changeup, heâ€™d throw an even slower one. I donâ€™t know when Iâ€™ve ever seen this many major league hitters look this foolish. Paul Konerko in the 9th was so far out in front of strike three that the ump nearly called it against the next batter. The Tigers, meanwhile, kept drawing walks after walk after walk off Jose Contreras, and the game wasnâ€™t in doubt for long. Jeremy Bonderman struck out Joe Borchard for his personal-best 14th strikeout to end the game, and the Tigers won, 7-0.

Now I will wrap this up and get to bed. Jimâ€™s somehow managed to get our TV stuck while he tried to order the Garfield movie.

Dan: Old Tiger Stadium was awesome. Just had to share.

Jason: ‘Slough of Despond’? I would be offended if it wasn’t true.

The Triptik arrived from AAA. Actually, it’s a 3-volume Triptik because of how many pages they had to try to stuff into it, including a full-page explanation of how much the toll is on the Tappan Zee Bridge, even though we’re traveling in the toll-free direction.

I’ve changed the driving times on the itinerary to reflect what the Triptik claims, and added the distances. The total distance, which I didn’t list on the itinerary, is calculated by them to be 3259 miles. Some say that’s a long way to go for a few baseball games. Others say it’s not long enough. (Should be interesting to see what the actual mileage ends up being.)

I have also made reservations for the final two hotels. In Detroit, we will be staying at the Holiday Inn Express downtown, which is half a mile from Comerica Park (and I’m told that downtown Detroit is reasonably safe to walk through at night).

In beautiful Galesburg, Illinois, the four of us will be staying at the Country Inn & Suites by Carlson, which I guess is named for Gordon Jump’s character Arthur Carlson on “WKRP in Cincinnati.” A suite wasn’t too much more expensive than a room, so I got one of those, which is supposed to have three beds and should keep people from tripping over each other. I assume Levi and Stacey don’t have a problem sharing a bed.

This is all reflected on the itinerary, of course.

Levi: For some reason, Thursday the 26th is missing from the itinerary. That means no Boston.

I know Jim’s incapable of making a mistake, so I assume this is the fault of the Internet.

Jim: Are you familiar with “Brigadoon”? Boston’s like that, except that instead of regularly disappearing for 1,000 years, it occasionally disappears for a few hours. Thats’s why it’s taking so long for them to finish the Big Dig.

Dr. Otto Octavius: If the earthquake hasn’t, then I certainly will!