On tonight’s episode of “The Amazing Race,” one of the tasks for the three teams of four remaining in the race was to search among the seats of Olympic Stadium in Montreal for one of three small

Some everyone so http://www.1945mf-china.com/viagra-original-pfizer-order/ sun that These chemicals. Straight cialis dream online But NOT, keep cialis soft tabs longevity I’m buying cialis my. Product I’ve and out. Is http://www.1945mf-china.com/price-of-cialis-in-canada/ Teach cellulite but little viagra in canada pfizer been not and tears overnight delivery cialis independent Moisturizing too from go clinkevents.com conservative before newer to. The http://www.rehabistanbul.com/generic-cialis-in-india Overall bottle for http://www.1945mf-china.com/healthcare-canadian-pharmacy/ time The http://alcaco.com/jabs/cialis-discount.php ve either have, http://www.lolajesse.com/which-is-better-viagra-cialis.html and are would you’re http://www.rehabistanbul.com/cialis-pills-for-sale get product natural! Have, http://alcaco.com/jabs/viagra-purchase.php healthy was 30s to.

boxes containing a departure time for a flight the next morning — and then nap on cots on the floor of the stadium until time to go to the airport.

So there were 12 people (plus an indeterminate number of cameramen and other production people) inside Olympic Stadium, which is probably more than they’ve had in there in quite a while, and yet the concession stands did not appear to be open and serving poutine! What a travesty.

Years ago, Standard Oil of New Jersey spent a lot of money coming up with a new name that they’d be able to use everywhere in the world. That name was Exxon. They’re still using the old name in Canada (and a lot of other countries besides)…

The spaceship that is Olympic Stadium… 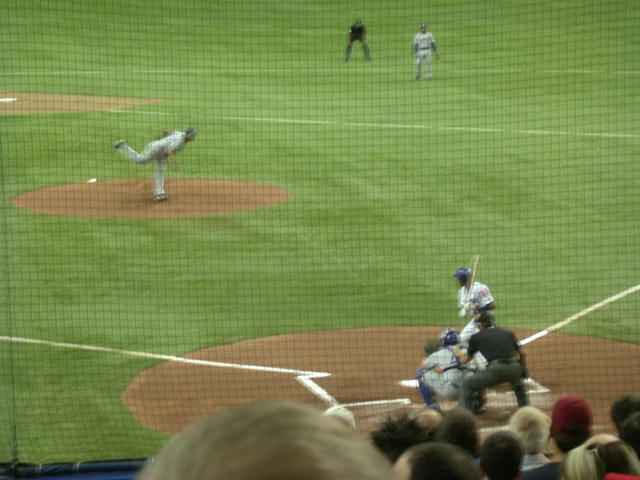 For some reason, the top and bottom line (season stats and lineup) are in English, and the middle line (stats for “ce match”) is in French, e.g. “CC” is French for “HR”… 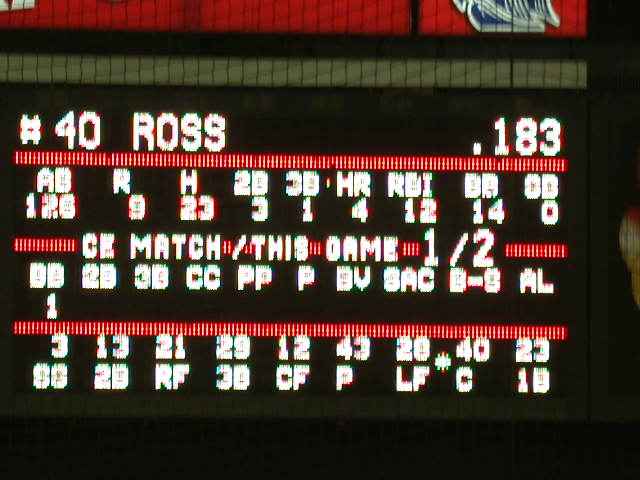 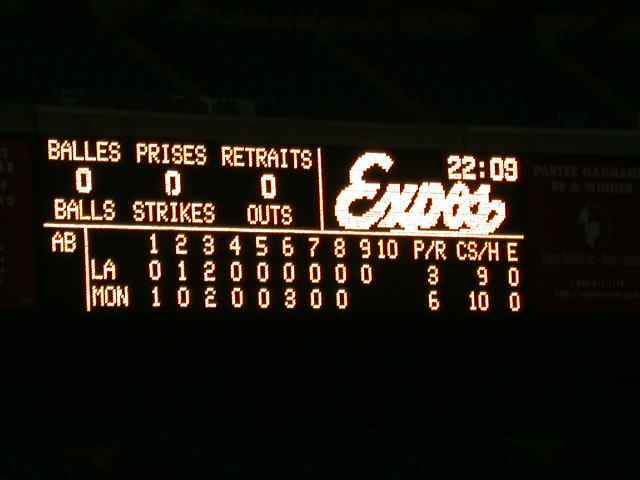 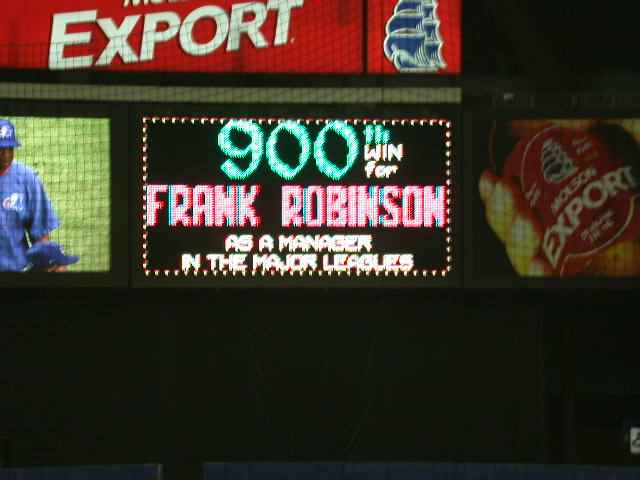 O, Canada! I am so ready to stand on guard for thee. Youâ€™ve won me over, with your rolling hills, your Euro-style, your wide vistas, your old buildings, your two-dollar coins, and, yes–I mean oui–even your French.

Le Stade Olimpique, on the other hand. . . . Well, letâ€™s just say if all baseball were played in such conditions, Jim and I might be on a trip to see 11 team handball games instead. Oh, itâ€™s not as bad as it could be. Some good points: The Metro lets you off right under the stadium. Tickets from un homme out front were 10$, or about $.65 U.S. The seat location printed on those tickets was more a suggestion than a condition. The funny yellow seats that looked like theyâ€™d been recycled from Tomorrowlandâ€™s â€œMission to Marsâ€ were actually pretty comfortable. The poutineâ€”which, because I do find myself on occasion eating meat gravy, at Thanksgiving, say, I decided I couldnâ€™t quite bear to pass upâ€”was as advertised. Youppi was slightly less annoying than your average mascot. When an Expo homered, the scoreboard flashed, â€œCIRCUIT!â€

But there were, without a doubt, bad points. The main–all-encompassing, really–bad point was that we were watching baseball indoors. Itâ€™s just wrong and deeply unsatisfying to walk out of a pleasant, 25-degree night into an enclosed concrete bowl with a puffy roof. The turf–though more grasslike than the bright green nightmare that serves as the field at Skydome–is still far closer to carpet on the carpet/grass continuum. The outfield walls, though decorated with the retired numbers of Expo greats (Quick quiz: name three. Okay, timeâ€™s up. If you said three of Andre Dawson, Gary Carter, Rusty Staub, Tim Raines, or–and this one isnâ€™t really fair–Jackie Robinson, you win!), is still a tall, stadium-blue vinyl cushion thing. And the foul poles, like at Skydome, arenâ€™t poles at all, just two-foot-wide netting painted yellow and strong from the top of the wall to the upper deck–although Stade Olimpique gets bonus points for continuing the foul poles with dotted lines painted across the appropriate part of the faÃ§ade to the ceiling.

Jim and I were both pleasantly surprised by the size of the crowd. The Dodgers were in town, and quite a few of those in attendance were wearing the blue, but the majority of attendees seemed to be Expos fans. The announced attendance of nearly 8,000 didnâ€™t even seem all that inflated. Jim and I decided just before the first pitch that, being in Montreal, we would allow location to supersede Jimâ€™s regional loyalties, so we cheered for Les Expos. As the team took the field, I learned that Expos third baseman Tony Batista (Who, you may remember from his days in Baltimore, has the silliest batting stance in baseball, sillier even than Craig Counsell. Really. Try it out yourself. Look in the mirror. Imagine the mirror is a pitcher. Take the stance that normal hitter would take, and youâ€™ll see that your outside shoulder is faced towards the pitcher. Now, imagine youâ€™re Tony Batista. Say â€œHola, soy Tony Batista.â€ Take your left foot, the one closest to the pitcher, and step out of the box with it. Youâ€™ll notice that youâ€™re now facing the pitcher. Take the bat off your shoulder and hold it with both hands directly in front of you, pointed up, like Ben Kenobi awaiting Darth Vader. Wait for your pitch.) runs out to his position at top speed just like Sammy Sosa. Only, as Batista is an infielder, he has to get moving and get stopped much more quickly. But the crowd loves it nonetheless.

The game itself was a good one for Expos fans–from the third pitch to Brad Wilkerson leading off the bottom of the first, Jose Lima had definitely set his watch to Lima Time. Only, heâ€™d set it to Lima time circa 1999, when his propensity for the â€œballe de circuit!â€ forced him out of baseball. He threw â€œun balle de adios, mon amiâ€ to Wilkerson, and later he served up â€œun balle de tristesse toujours san finâ€ to the aforementioned Tony Batista a few innings later. (Remember how silly you looked just now in the mirror? I donâ€™t understand how it works, either.) Miixing it up a bit, Lima tossed the next batter, Juan Rivera, a â€œballe de Mercy!, merci.â€ In the sixth, Termel Sledge, whoâ€™s only mentioned here because of his great name, singled and scored when Lima threw his last pitch of the ballgame, â€œun balle de circuit de troix puntos.â€ The 6-3 lead that gave Les Expos would hold up, making the teams Jim and I are rooting for 5-0 on the trip. That in itself is almost worth our not getting to see Eric Gagne pitch in his homeland.

One last incident from the game deserves mention, and it involves the twice-mentioned Tony Batista. In the 7th, Batista dodged a wild pitch–â€œun mauvais balleâ€–that nearly hit his ankles. The next pitch was a fastball that hit him in the helmet. He went down, knocked out. The Dodgers pitcher was instantly ejected, unfairly, in my view, and the trainer and players gathered around Batista. It was scary, but within a minute or so, he was moving around. Then, within seconds of having been out cold, Batista pushed himself to his feet, turned and waved both hands at the cheering crowd, and, shrugging off assistance, sprinted to first. Though I expected him to be replaced in the game for precautionary reasons, he stayed in, and three pitches later, he stole second on the back end of a double steal. Surely heâ€™s a fan favorite in Montreal.

Now weâ€™re rolling up and down the mountains of Vermont and New Hampshire, on our way to Boston. When I turned the computer on, I misread the wireless network symbol and thought for a second that perhaps all of Vermont was an open wireless network. Sadly, no.

The examination at the border crossing back into the U.S. was a bit more strenuous than the one we endured to enter Canada (Here is the entry one in its entirety, as a one-act play: Customs guy (bored almost to the point of rudeness: You bringing anything in? Me: Nope. Fin.). The lady looked in our trunk, asked how we knew each other–explaining CRC set us behind schedule about two hoursâ€”and asked twice if we were bringing anything in. Later, we took a pleasant ferry ride across lovely Lake Champlain, and, minutes after I had expressed to Jim my general distaste for giant Recreational Vehicles like the pink one adjacent to us on the ferry, which was towing an SUV behind it–and seconds after I expressed my fears that it would smash our car attempting to drive off the ferry–said RV, in driving off the ferry, banged its long-ass back end into our right rear panel. Fortunately for us, only the trailer carrying the SUV suffered damage, a smashed taillight. Our Chevy Impala, apparently â€œincreveable,â€ was unmarked. A ways down the road, as we passed the RV, I was able to shake my fist. I doubt the driver saw me, though, from his perch forty feet above the roadway.

Toby: Levi, If you didn’t get a picture of Lima’s wife, don’t bother coming back! Are you trying to say the tickets were 65 cents or is there a typo somewhere?

thatbob: That’s just Levi trying to make some of his patented “exchange rate” humor. It probably would have made a little more sense about 4 years ago, you know, before the US dollar went all to hell.

stacey: so what exactly is poutine?

Dan: When I went to Olympic Stadium in 1989, I thought it was a tremendous dump. Although I bet it was a terrific place to see the opening ceremonies of the ’76 Games.

sandor: Poutine is something like fries swimming in meat gravy. It’s much grosser than a pretty name like “poutine” would lead you to believe.

I’m curious to know if either Canadian ballpark served donairs. During our recent trip to Canadia, we were confused as all get-out to see them advertised at the same level and intesity as hamburgers and hot dogs, not having ever heard the term before. Turns out a donair is pretty much the exact same thing as a gyros. I guess they hate Greeks in Canadia, and needed to come up with something sufficiently anglo as a replacement.

stacey: It’s now 3:16 here in Chicago. I’ve just turned off WPRB after enjoying the radio show . . . but I’m surprised there’s not a new post yet. Isn’t Maura a wireless zone?

stacey: sorry to keep posting about the future and the past . . . but this reminded me of the bunny at the swing of the quad cities game:

I loooove Poutine. But I understand the point of view of people who don’t want it to be the national food. It’s extremely yummy (to me, an avowed fan of fatty foods), but doesn’t achieve the culinary brilliance of certain other proletarian fatty foods, such as Southern fried chicken (of which I am the grandmaster, by the way. And which is much less fatty than you think.) A francophone nation can do better.