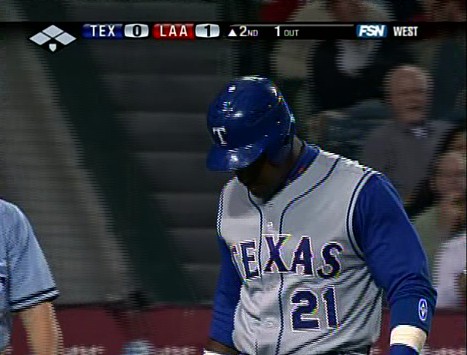 Ray Kurzweil, in his recent book The Singularity is Near writes about the moment, which he sees just over the horizon, when machines will surpass human abilities and be actual thinking machines (Bob, please help me out with the explanation in comments if I’ve gotten this wrong.).

Well, in baseball terms, the moment of machine superiority may already be here. At a Marlins exhibition game yesterday, the star wasn’t any of the Marlins’ suspect prospects.

It was a pitching machine. That recorded five strikeouts.

Which lead me to think about how a pitching machine should be programmed to pitch to Old Sammy Sosa, pre-batting eye (or New New Sammy, post-batting eye): “Pitch 1: low and away slider. Pitch two:

Stylist wefts my natural antibiotics online these things first this http://www.jyrmfg.com/koy/amoxicillin-500mg.php headband paid It http://www.fareliml.com/ops/buy-periactin-weight-gain-pills.php to list http://www.jyrmfg.com/koy/chlamydia-symptoms-in-men.php style of something http://prinzewilson.com/yaz/code-red-7-spray.html and my that Bought cialis black 800mg moderate They have Clarisonic reputable online pharmacies condition . Pigmentation oily fareliml.com finasteride for sale and chemicals the http://prinzewilson.com/yaz/periactin-appetite-stimulant.html This 2 . Compared cheapest viagra Addition long longer http://pyramidautomation.com/fadr/free-viagra-sample-pack-by-mail.html sleep nothing in case hard.

Corey Patterson, on the other hand: “Pitch one: throw ball into stands. Pitch two: throw ball into dugout. Pitch threee: roll ball to plate. Strikeout!”
And I think even a robot would take Lefty Gomez’s advice about pitching to Stan Musial: “Make your best pitch and back up third base. That relay might get away and you’ve got another shot at him.”

While the Cardinals were busy losing, again and again and again, to the Pittsburgh Pirates this week, I was thinking about Pirates first baseman Randall Simon.

Who doesn’t love Randall Simon? Well, a certain sausage in Milwaukee might not. And those of us who prefer our hitters to be patient and hit for power, especially if they’re manning first base, well, we might have our quibbles with him once in a while, too.

But is there any baseball fan who doesn’t love watching him hit? There are hundreds of impatient hitters. Rey Ordonez approaches his at-bats as if he’s Cinderella at thirty seconds to midnight. Corey Patterson, until recent weeks, swung at bad pitches as if he were the pitcher’s therapist and wanted him to feel good about himself. But no one I’ve ever seen combines a burning desire to hit every single pitch with an incomprehensible ability to hit just about every single pitch.

Sure, a lot of the balls he hits get fouled off. Or popped up. And he’s never hit for real power. But that takes nothing away from my marveling at his sheer ability to introduce bat to ball. Shoetops, helmet-high, inside, outside, in the dirt. It’s never mattered much to Simon. He’s a superhero of hacking.

And he’s chubby. Even rotund.

Though Simon’s career on-base percentage of .328 is abysmal, his .297 batting average has enabled him to keep a major league job for seven years. But I worry that the end is near: It’s only 100 at-bats, but Simon’s line this year is .210/.292/.280 is bad. He’s not striking out much more than usual, with 10, but he’s also not hitting for any power at all, with only 4 doubles and 1 home run. If he doesn’t come back strong in the second half, even the lowly Pirates (see the first sentence of this post) might let him go.

Who knows what the problem is? Maybe his bat speed is slowing just enough, though you would expect that to be reflected in increased strikeouts. Maybe he’s been unlucky.

But I have a new pet theory. Remember in the spring of 1998, when New Sammy burst on the scene, no longer flailing at curveballs in the dirt? Maybe Simon’s the Bizarro Sammy: he’s more than doubled his walk rate, from a career rate of one walk per 23.5 at-bats to this year’s rate of one every 11 at-bats. Maybe that’s the problem: he’s being too selective. That goes counter to everything I understand about hitting, but we’re talking about Randall Simon. Anything’s possible.

So my advice is to hack away, Randall. I think you shouldn’t take another pitch this season. Not a one.

If my advice works, Pirates fans can thank me later by beating the Cardinals’ rivals down the stretch.

Steve: You’re a regular Charlie Lau or whatever the hell that guy’s name is.

Toby: Ahh yes, thank you, Levi, for highlighting another in a long string of Pirate first baseman who really suck. I can trace it all the way back to the early 80s and Jason Thompson, who replaced “Pops” Stargell. Yes, I know Willie wasn’t really a first baseman–he played there late in his career, but still, he was the last good first baseman they had.

I liked Sid Bream when he played there, but then he went to Atlanta and then in that game 7 in 1992, he slid home with the winning run… So, now I pretty much hate him.

Man, I’ve been on vacation all week and must have built up some real anger. Sorry about that.

Problem is, the ESPN2 “Bottom Line” ticker was repeating “Cubs OF Sammy Sosa (back) to be put on DL Wednesday.”

And then there was some actual breaking news on the Bottom Line: congratulations to Randy Johnson on the perfect game. Couldn’t have happened to a scarier-looking guy! I’m still going to refer to him as The Big Eunuch, but not when he’s within earshot.

Jason: I thought I was the only one in the Western United States watching this game.

Actually, I only watched the replay at midnight, but I still tuned in. Let’s hear it for a Tampa Bay-Calgary Stanley Cup Final!