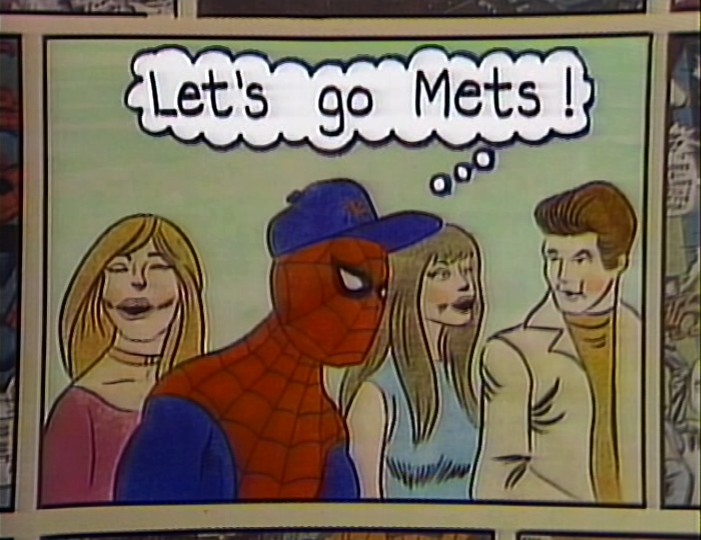 That’s from “The Electric Company,” original air date April 15, 1977. No, I have no idea what’s wrong with the mouths — perhaps that’s why they didn’t give one to Spider-Man in his

“Electric Company” iteration. Anyway, the villain in this episode is The Wall, who, disguised as a piece of the outfield wall at Shea Stadium, runs forward at a crucial point in the game, giving the other team a home run. Why, yes, that does sound like something from the “Major League Supercrimebusters” segments of “The Complacents.”

(You know who the head writer of “The Electric Company” was for most of its run? Joss Whedon’s father.)

Well, the demand from some quarters has been so high that I have to make sure you know about how Moises Alou, who doesn’t use batting gloves, toughens his hands.

According to an item a ways down in this column, he pees on them.

So don’t hi-five him. And when he comes to the plate, shout, “Hey, Ol’ Pee-Hands!” Sounds very 19th-century.

Oh, and on the topic of waste, here’s Barry Bonds’s take on the Spider-Man controversy:

“What the [bleep] are you asking me for? I don’t care. Our job is to play ball, not to worry about what ad is on the billboard. I don’t care. They can have [bleepin’] dog-poo as bases so I have to step in [bleep] as far as I’m concerned. What the hell.”

As Redbird Nation, where I found the quote, says: It’s easy to hate Bonds, but it’s hard to hate his incorrigible Bondsness.

Actually, we probably shouldn’t spread the idea of dog-poo bases. I wouldn’t put it past Selig, if someone in the dog-poo industry offered him money. King Kaufman at Salon is at his best today on this topic.

Certainly Major League Baseball couldn’t possibly be trying to get people to hate them a little less.

Oh, wait, surprisingly, they are, although it’s a little unclear whether MLB or Sony backed off first.

Levi: That’s good, because much as I love Spider-Man, I was about to call Alistair Smythe and ask how much he would charge to make a new Spider-Slayer.

Jim: And I was hoping I’d be able to get all the way through the lyrics to They Might Be Giants’ “Spider.” I guess I still might.

Certainly Major League Baseball couldn’t possibly do anything else that would make people hate them even more.

No, wait, they could.

This was called to my attention by my fellow captioner Joe, who points out that one thing he doesn’t like about NASCAR is that you don’t know which ad you’re supposed to be looking at at any given moment.

By the way, it looks like if the total length of the comments to a post goes beyond a certain point, the display will just be truncated, although the text is apparently saved somewhere (all comments get e-mailed to me, and I got Steve’s latest Barry Bonds missive in its entirety, so I do know the terms of the bet he’s proposing with Levi). I may try to poke around and see if I can figure out if there’s a way to get the length limit.

Levi: Jim– It could just be me, because I have been involved in the discussion, but I was actually thinking that the discussion Steve and I were having, if it’s okay with him, might be interesting enough to make an actual post out of. Is there a way you can do that with what you’ve been emailed? Or–again, if it’s okay with Steve–just post the entirety of his latest comment, with a reference to the location of the rest of the discussion?

thatbob: What seems really weird to me about the Spider-Man advertising is MLB’s assertion that, by accepting these ads, they will themselves be reaching a younger target demographic. They seem to have the programmer/advertiser roles reversed, as if more teenagers would watch 60 Minutes if they could only land a Mountain Dew advertising campaign. And by this logic – MLB seeks to horn on on Spider-Man’s young fanbase – MLB should be paying Columbia Pictures and Marvel Comics for the right to appropriate Spidey images – not the other way around.

So how could this possibly work? Are there thought to be little Spider-Man fans running around who are going to ask dad to make sure to get ball tickets on Spider-Man day? And then, after watching a game, become long time fans? If so, then “Excelsior!” I wish them luck.

See, I think Spider-Man and Sponge Bob gate promotions and merchandising actually make some sense. I wouldn’t mind a Spidey bobblehead in a Cubs uniform (though it’s probably asking too much to think Peter Parker would be anything but a Mets fan). But that’s no reason to start cluttering up the field of gameplay.

In other words, their cluttering up the field of gameplay has nothing to do with attracting a youth audience at all, but is really an ends in itself. Motor oil, prescription drug, and automobile ads are certainly on their way.

Levi: The Sox director of media relations said they hadn’t yet decided how much they are going to get into this–the participating home teams have some leeway (Which, I think, is a good sign that this is a stupid, stupid idea.). She said, “We’ll make our decision based on how much it enhances the fan experience.”

Let’s see. How much do silly, annoying ads enhance the fan experience? Zero. So I guess they won’t have anything out there at all.

Also, this is in direct contravention of the rules, which specify white canvas bags and white rubber for the mound.

Finally, if you’re the Spider-Man promo people, how do you decide that this is a good use of your money? Are you looking ahead to the controversy and all the publicity? Or do you really think little ads on the bases are a good way to get the word out to the right people?

sandor: The only people I see as being at all an audience for these silly ads are the players themselves. The ads themselves are so small no fan — save the occasional intruder — will be able to see them. I’m imagining a situation where a player gets on first base, idles around a bit while the pitcher warms up, looks down and sees the ad, and says to the first baseman, “You don’t anything tonight? Wanna catch the new Spider-man?”

sandor: Obviously that’s supposed to be “You doin’ anything tonight? …”

Jim: Memo to players and umpires for that weekend’s games: “More close plays at first base.” That will allow the TV cameras to get a good view of the ads during incessant slow-motion replays.

Steve: What upsets me most about this is how cynical it is. The justification is that they need to attact a new fans. How are they going to skew young just because kids see their favorite movie characters on the bases? Who the hell sees the top of second base anyway? Here’s a few ideas to really attract younger fans:

1) more affordable tickets
2) playoff and world series games that don’t end until after midnight
3) make players sign more autographs
4) pick up the pace because even for a fan, three + hours of baseball can be boring.

Levi: Steve–you’re right on. The only thing they’re doing on this list is speeding up games–and even that, they’re doing half-assed. Games are getting shorter, but not much, and they’re not taking the couple of immediately available steps they could to improve things.