Now that things are finally a bit quieter at work, I’m finally going to do a season-ending wrap-up. And I’ve decided that the way to do it which will be the most fun for me is to pair bad and good things about the season and string them out over many, many posts until I get bored, or all of you get bored, or pitchers and catchers report. So here goes.

Bad:
The *#$)@&@#% Braves won their weak-ass division again. Remember at the All-Star Break, when Dan pointed out that the Braves’ struggles in the first half were one of the good things about the 2004 season so far? Yeah. That was nice. But now they’ve won their division every year since 1991 (except for 1994, when this much better Expos team would have beaten them, had it not been for Bud Selig). The last time the Braves didn’t win their division, I had just gotten my driver’s license. Only true political junkies knew who Bill Clinton was. Bob Hope wasn’t even 90 years old yet. John Smoltz’s Abe Lincoln beard had just gone out of style, along with high, starched collars and medicinal leeching.

And they’ve done it with a constantly changing cast. Smoltz is the only Braves player who’s been on every one of those teams. *#$)@&@#% Braves.

Toby: Levi, Surely you are as outraged as I am that a Cardinal didn’t win the MVP… Do you think having three legitimate candidates ended up hurting each of their chances?

Levi: I have to admit, Toby, that I think Bonds was the MVP. He was just that much better.

I am surprised that Beltre finished second, since both Edmonds and Pujols were better than he was, and Rolen was just as good.

Edmonds is the one I think got jobbed: in my view, he was the second-best player in baseball this year, hands-down. But he finishes a distant fifth.

Dan: Down the stretch I was pulling for Beltre, because he sure carried the Dodgers on their back (and as he was on my fantasy team, I was paying close attention). But when I put it all in perspective, the Giants are, really, a last-place team without Bonds. He’s just killer. I don’t like him, but he’s just in another world.

Of course, I’m no Cardinals fan. So I didn’t see which of they three were most deserving, were deserving at all, etc.

And I have my own issues with Jime. So I’d call Vlad or Tejada 2nd best, but that’s just me.

Levi: Dan, it sounds like you dated Jimmy Edmonds, or were roommates with him, or the Porsche he sold you was a lemon.

Or do you have other problems with him?

Dan: Did I never tell you the story about the “Jime” fan?

I was at the one 2000 NLCS game the Mets lost (or, to your POV, that the Cardinals won), at Shea. There was some dude who was being insanely annoying, strangely combative guy wearing a shirt he made that said JimE (with no spaces) and a big No. 15. Under that it said MVP. He was a real pain in the ass and we (Mets fans) gave him an earful. And our seats sucked, so we were all collectively edgy as it is.

So that’s why I don’t like Jim Edmonds — or, Jime. Not a very good one, but at least there’s SOME story behind it.

Oh, and he had sex with my sister.

In 1996, Levi was in the U.K. and the Cardinals battled the Braves in the NLCS. The Braves beat the Cardinals 14-0 in Game 5, and then 15-0 in Game 7, becoming the first team to win the NLCS after being down 3 games to 1. So I mailed Levi, across the ocean, a sympathy card with a few news clippings enclosed.

This year, shortly before Game 4 of the World Series was about to begin with the Cardinals already down 3 games to 0, I stopped off at the drugstore and bought a sympathy card. There was no reason to include news clippings this time, so instead, so it was more than just a card, I broke out my disused colored pencils to do some illustration, making a certain logo into a sad and tearful Cardinal.

I was finished by the sixth inning, and we all know what happened next. I put it in the mail the next day. 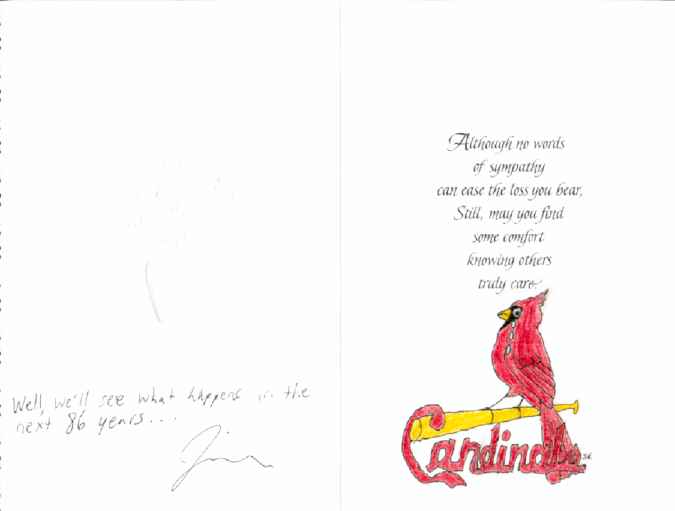 The preprinted message on the right reads “Although no words of sympathy can ease the loss you bear/Still, may you find some comfort knowing others truly care.” Appropriate, huh? The message I wrote on the left reads, “Well, we’ll see what happens in the next 86 years… (signed) Jim.” There was a raised illustration of a bouquet of flowers on the front of the card, so I couldn’t draw on the bumpy surface on the left side (which I didn’t think about when I was buying the card). I think I did a pretty good job, except for the fact that I somehow managed to end up with the cardinal leaning backwards. It’s more straight up-and-down in the real Cardinals logo.

Levi: I don’t know that this presentation does the card justice. The crying Cardinal looks very, very sad.

But Jim, does the fact that you were working on this card during the final game mean that the Cardinals’ loss is your fault?

Jim: I was watching the game TiVo-delayed, so nothing I did could possibly have affected the outcome. At least that’s my excuse.

Jason: It looks like the Cardinal is about to fall backwards off the bat in despair. And nice lettering job! Could you now draw a happy Devil Ray to celebrate the escape from the AL East cellar?