5:03 — Angels go ahead 5-3 in the top of the ninth.
5:13 — Roberto Petagine hits a pinch-hit home run for the Mariners, and it’s now 5-4 with one out in the bottom of the ninth.
5:18 — Los Angeles, or perhaps Anaheim, wins: Angels 5, Mariners 4.
5:19 — I only have two games to watch now. Giants and Padres tied at 1, Marlins and Astros tied at 0. I’m paying more attention to Giants-Padres.
5:21 — And now both games are in commercial. It would be more fun if there were more Bay Area or Houston-specific commercials, but no such luck.
5:31 — Vital bottom-of-the-screen ticker as the Padres take the lead 2-1 in the bottom of the fifth: “The Sharks @ Dallas game is airing live right now on FSN Plus on Comcast digital cable channel 410 and on analog channels 11, 14, 27, 32, 33, 69 or 77, 655 on DirecTV and 453 on Dish Network. The Sharks game will also be joined in progr–” and then the ticker disappears at the end of the inning so that they can switch to an exterior shot of American Airlines Center in Dallas (with the light rail going by!) and the announcer essentially saying the same thing as the ticker — but fortunately for everyone, he doesn’t have to read off those channel numbers. This is all because FSN doesn’t have a full-time second channel in the Bay Area the way they do in L.A.
5:36 — No, wait, now the Giants announcer has to read off those channel numbers. Wow.
5:38 — And the announcers spend two minutes joking about having to read off all those channel numbers (specifically, the fact that the music bed almost ran out).
5:40 — Barry Bonds flies out to center and is soundly booed.
5:48 — The honking vehicle is back, but honking from slightly farther away than before.
5:49 — Khalil Greene hits a 2-run homer to put the Padres up 4-1. The ball is caught by a guy who wore a brown monk’s robe to the game. He’s not fully dedicated to the Padres, though. He has not cut his hair — in fact, he has long, luscious, curly locks of the type that I’d probably have if I let my hair grow, ladies.
5:58 — I think the last few innings of the two games currently in progress would be best enjoyed with tacos. I’ll go make some right now!

What, you thought I was making up those channel numbers? I would never joke about something so serious… 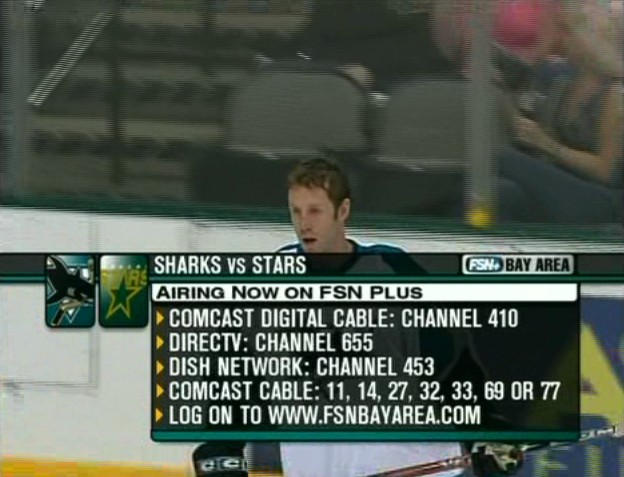