The link between the Devil Rays and the Dodgers? Why, former Devil Ray Wilson Alvarez, of course. He’s the white blob on the left side of this picture, getting ready to pitch to Sammy Sosa… 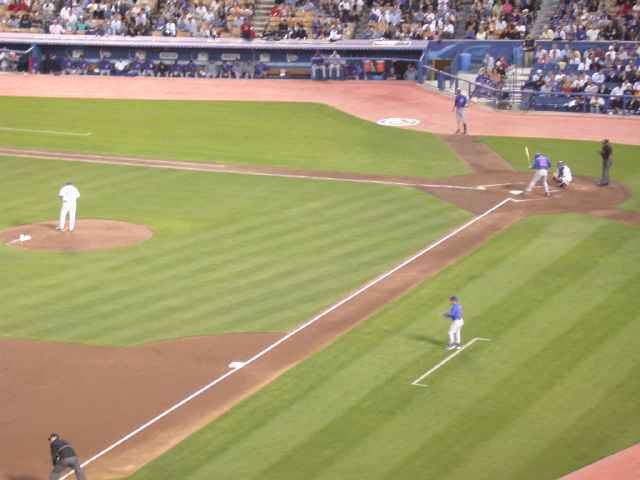 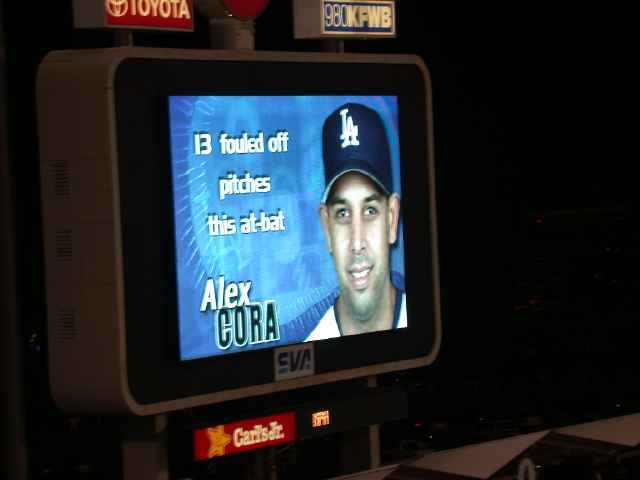 Cora fouled 14 times in a row, and each one was accompanied by some Little Leaguers in our section trying to start The Wave, which would peter out a couple of sections over because nobody else really cared. And then Cora hit a home run.

The answer is, yes, I had a good time, although I was pretty tired by the end of the game shortly after 10:00 Pacific time, since I had been up since 6:00 A.M. Eastern time. I’m not expecting any jet lag on the road trip. Fortunately, I didn’t have to be behind the wheel to get out of the Dodger Stadium parking lots… 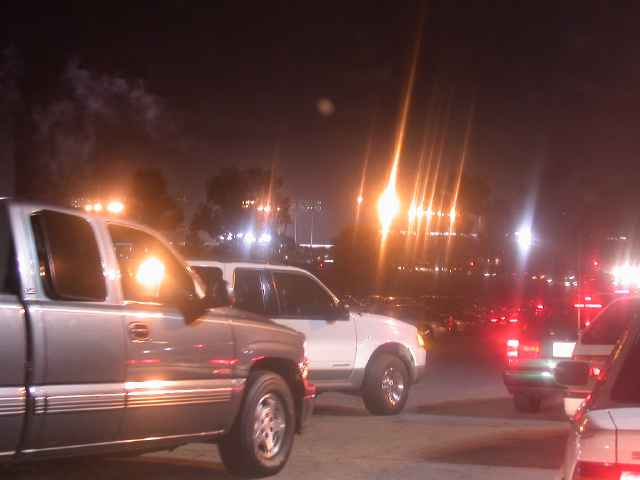 In the L.A. Times on Thursday morning, the headline spotlighted Alvarez (pulled after 101 pitches), but the picture is of Cora being congratulated after the at-bat that went on forever… 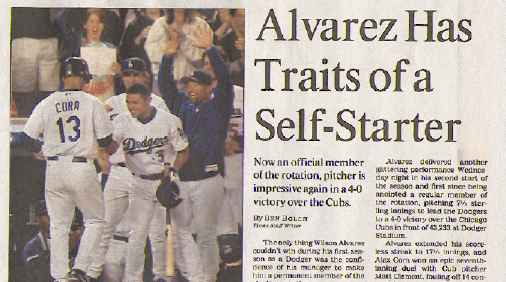 Biggest surprise for me in that game? Learning that Wilson Alvarez is in the league again, and that, despite losing some weight, he’s still a very big man.

Tom Ellwanger: And at the Ranger/Devil Ray game on the afternoon of May 13, in order of perceived excitement:

1. The Rangers pitcher picked two Devil Rays players off first base, including Maura’s favorite player. Per the surprisingly diplomatic Lou Piniella, no right-handed pitcher can have that good a pickoff move without balking, in this case with his knee, “but the umpires didn’t see it.”

2. The Rangers blew both resulting run-downs in different ways, something which nobody in the stands–all 2,600 of us–had seen since Little League. In one case, the picked off runner made second and got credit for a stolen base, producing the same result as a balk call (assuming Lou was correct).

3. The Devil Rays won the game. The starting pitcher got the win, the new-from-Durham setup man got his 95 mph fastballs close enough to the plate that people swung at them, and the closer got the save (save number 4 out of 11 total victories).

4. Raymond came down the aisle and stopped to kiss Jim’s new stepmother. No photographer was around to memorialize this poignant image.

5. Jim’s new stepmother wishes that Jim’s father had used the ready-made excuse to pound this obnoxious mascot into the real-clay infield, but he (Jim’s father) was too stunned by the entire spectacle to react that quickly.

Baseball fever! We have it in Tampa. Oh, Rocco Baldelli bobblehead doll night is next Tuesday, but I’m going to the Lightning/Flyer game.

Levi: At least with Rocco Baldelli bobblehead day, the Rays are sure they won’t be faced with the ignominy of having to cancel the day because the player’s in the minors again, like they were forced to do with Jason Tyner bobblehead day.