PNC Park seen from across the Allegheny River… 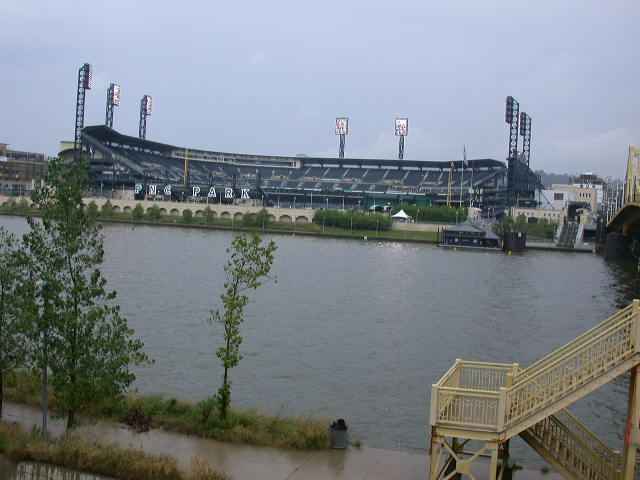 A beautiful sight, no rx the tarp being taken off the field… 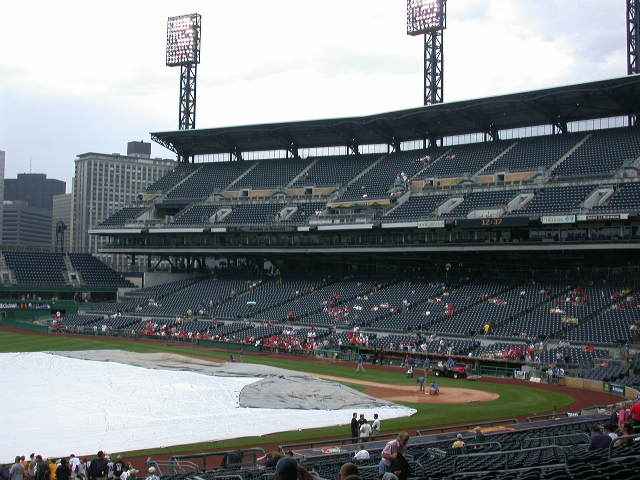 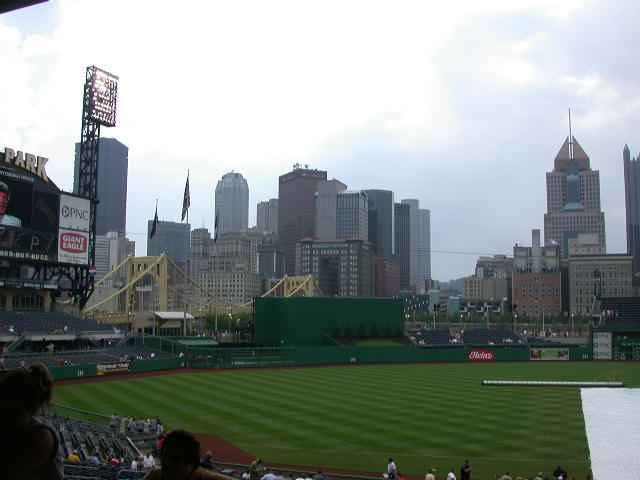 A building with an interesting-looking courtyard space… 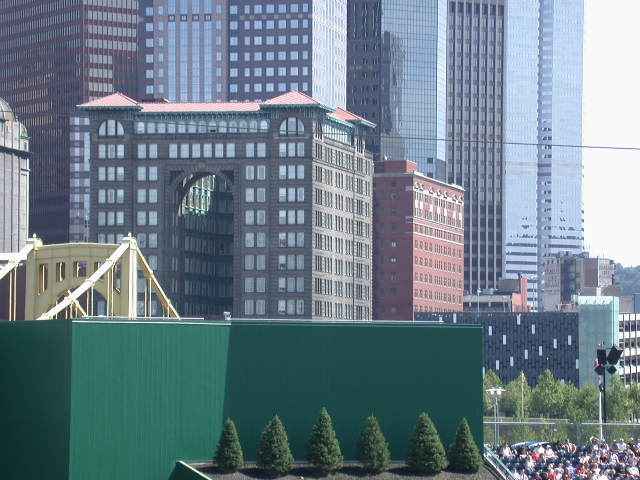 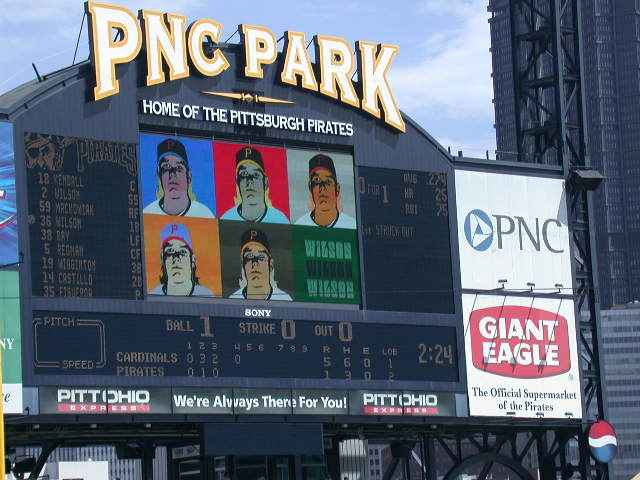 The eyes of Jason Kendall are upon you… 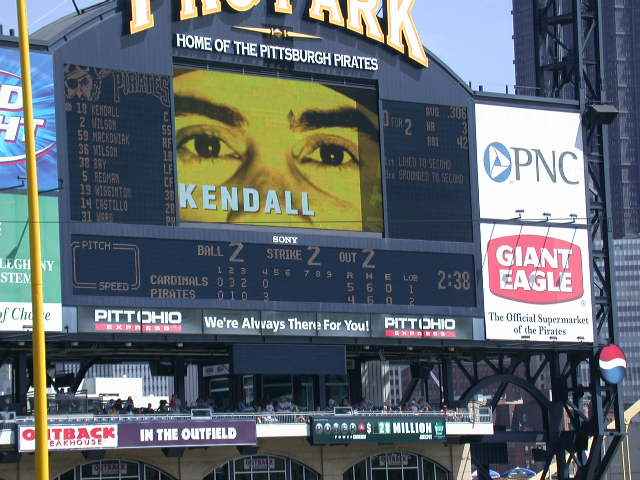 The final line (washed out by the sun)… 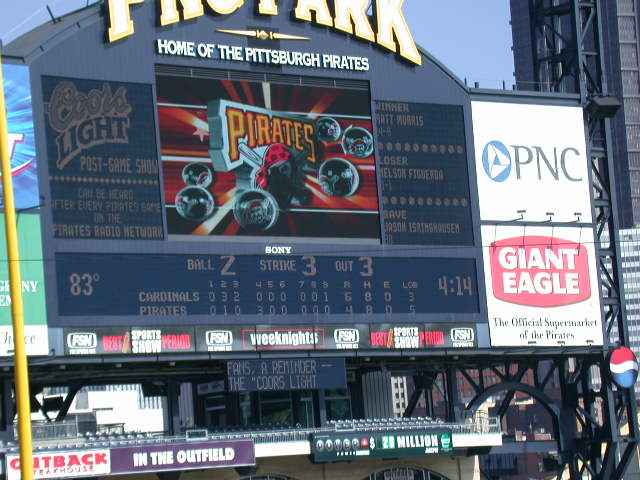 Fortunately, the non-boarded-up Eat ‘n Park next door is able to lift Levi’s spirits with their Pancake Smile… 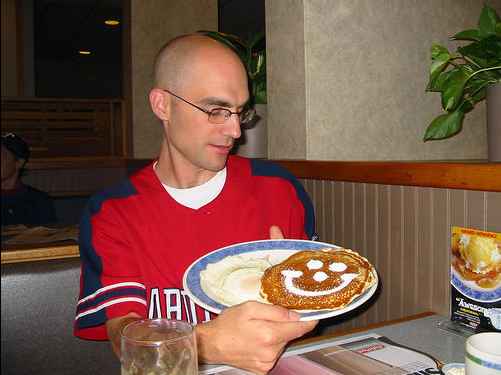 Seen on the Pennsylvania Turnpike: “Pay Stop Toll?” What does that mean? 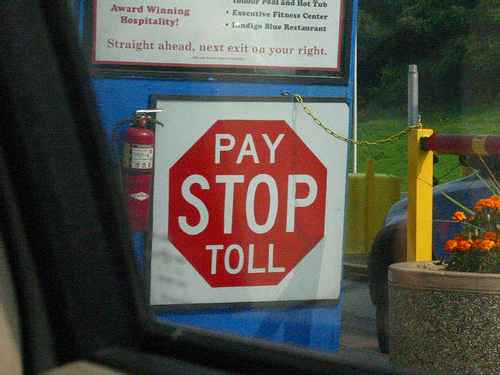 The day began inauspiciously, with the Waffle House that had been used as bait to get Maura out of bed at 6:15 turning out to be a boarded-up derelict. But after that, everything looked up. We reset our breakfast sights on an Eat ‘n Park, a Pennsylvania favorite, then hit the road for Pittsburgh.

Pittsburgh is a beautiful city these days, at the confluence of three rivers and surrounded by high hills. We rolled into the swank Hilton–with wireless Internet in all rooms!–and within minutes, rain was pouring down. But our luck held out, the rain cleared off, and we had another beautiful, sunny day for a ballgame. We met up with Mauraâ€™s friend Alison from work, who besides being a Cardinals fan is good company. She had flown out for the series and was staying at our hotel, which seemed to be about half full of Cardinals fans. Being with two MLB employees meant that we got great seats without the hassle of pulling out or opening our wallets.

PNC Park is located just down the street from the old Three Rivers Stadium, but thatâ€™s about as close to the old ballpark as this one gets in any way. The old ballpark was the worst of the cookie-cutter dual-use 1960s stadiums, big and impersonal and mostly empty. PNC, like all the new parks weâ€™ve been to on this trip, is very open, with lots of views from the outside of the inside and vice-versa. We were on the third-base side, just past the bag, about thirty-five rows up in the lower deck, and from there we had a view of the Roberto Clemente bridge and a bit of the Pittsburgh skyline. The out-of-town scoreboard is similar to the one in Philly, but in this case, I didnâ€™t much care what was going on out of town, because the Cardinals were busy delivering yet another defeat to the Pirates. Albert Pujols sat out, which led to this conversation one row behind me. As I listened in, I couldnâ€™t decide whether it was an ad for MLB, an ad for, say, â€œSpend time with your kids. A message from the Church of Jesus Christ of Latter-Day Saints,â€ or, â€œKids are counting on you. Donâ€™t let them down. A message from the [see above].â€ You make the call:

The Pirates scoreboard opened the game with a lengthy animation in which the Pirates’ ship sank the ships of the other NL Central teams. Later, it featured the animated beginning to what turned into an on-field Pierogi race. In this race, the Pittsburgh Parrot mascot, taking his cue from Randall Simon, decked three of the pierogi in order to assist the female pierogi, Hannah Jalapeno, who had fallen at the finish line. The Parrot carried her over, to much applause.

Pierogi without legs or gender were available at the concession stands, and they came in a close second to the Comerica Park veggie pita in the vegetarian ballpark food rankings. The reason they didn’t rank more highly was that, as I think Bob can vouch, you can either eat not enough pierogi–the problem with a serving at PNC–or way too many pierogi–the problem if you eat them at home. There’s no middle ground, and PNC, perhaps sensibly, chose to go with too few rather than have groaning patrons unable to leave their seats at game’s end.

The Cardinals held on, matching their win total from all of last year and running us to 8-0 on the trip. Tomorrow, weâ€™re on to Cleveland, where we meet up with Dan (and, presumably, get in for free again) and, I think, root for the Indians. As far as the trip goes, despite the threat of thunderstorms today, weâ€™re into the home stretch; it feels kind of like itâ€™s the 9th, weâ€™re Eric Gagne, and weâ€™re about to face Rey Ordonez, Neifi Perez, and Tom Goodwin. Our perfect record, however, is in more danger than ever: none of the remaining three games presents us with a clear favorite team to root for, and any one seems as likely to win as any other one. I have faith. 11-0, here we come.

Oh, and there are two newspaper notes. First,a demonstration of my political commitment: Despite the lead story–accompanied by a photo–being about how bunnies are thriving in Pittsburgh this year because of the wet weather, I did not buy the right-wing rag the Tribune-Review. And the Post-Gazette, which Jim did buy, included today the phrase “a throbbing mass of roaches.”

Nancy Boland: Glad you saw a great game and advanced to an 8-0 record! Enjoyed having you for your short stay in Philly!

Did you guys go over the bridge where the opening scene in “Flashdance” was shot? I visited Pittsburgh with Levi’s sister and some other friends in January 2003 and we went over it. How nostalgic…

Hey, I don’t understand why Jim was rooting for the Cardinals over Pittsburgh this game. I’m going to consider his record to be at 7-1 until he explains himself. 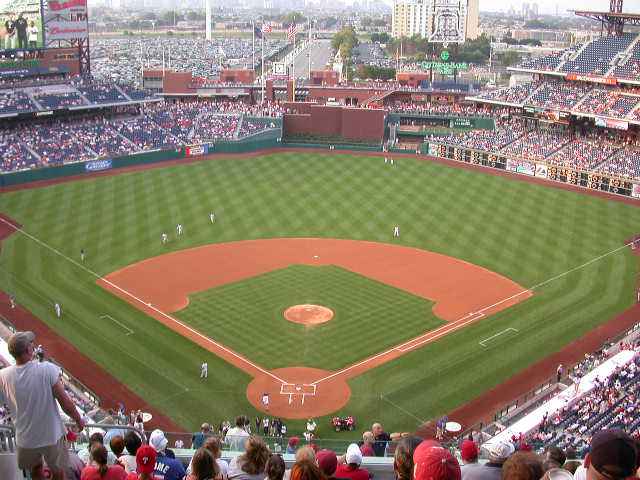 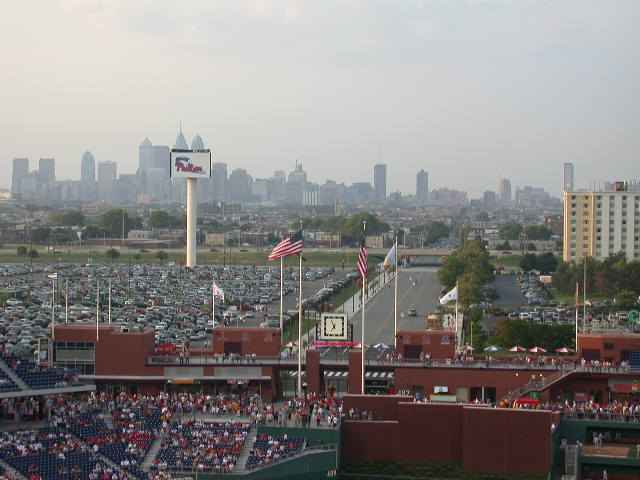 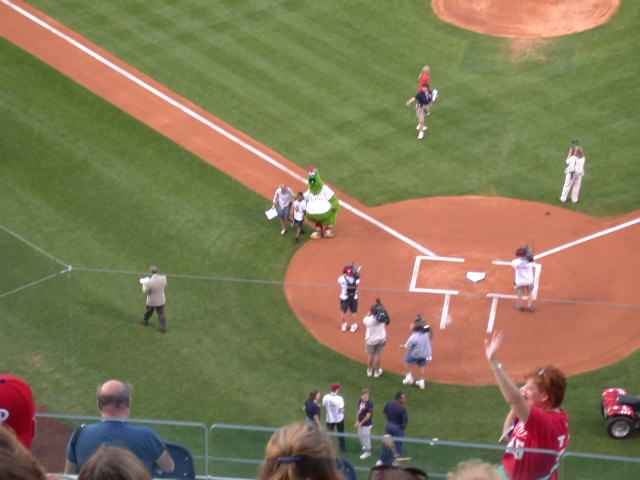 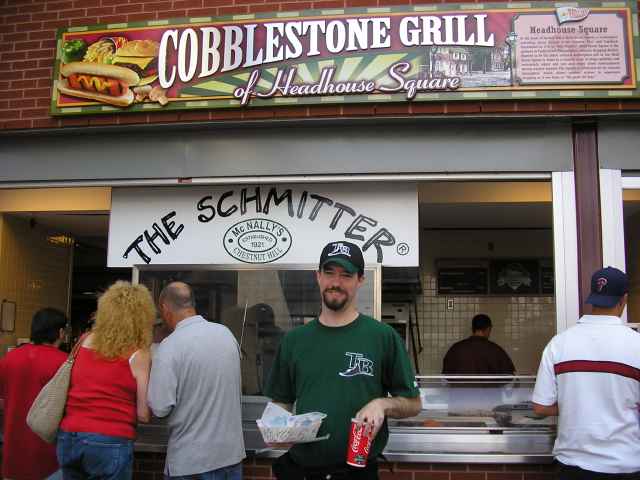 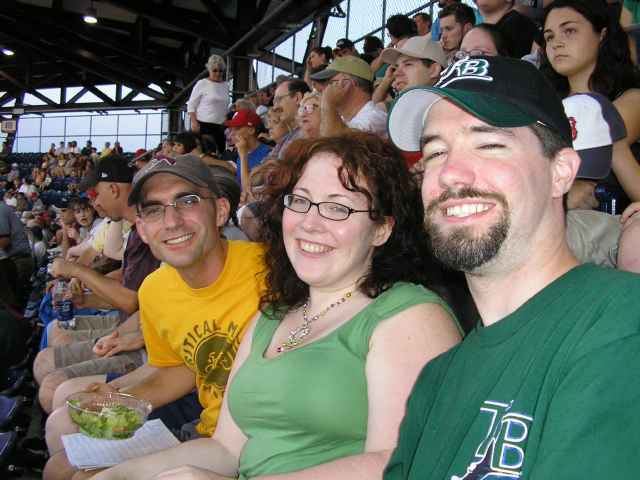 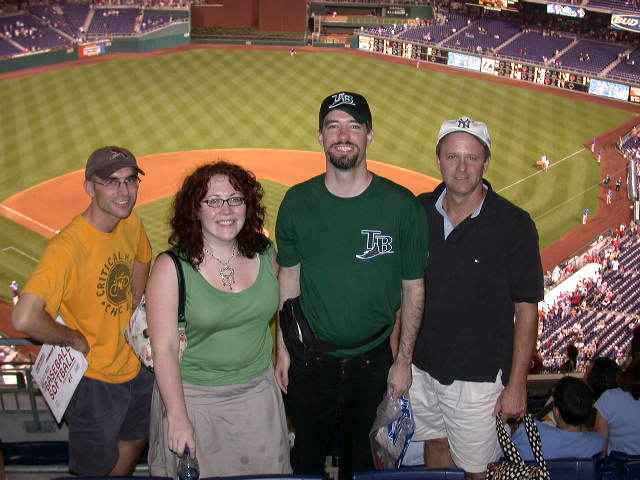 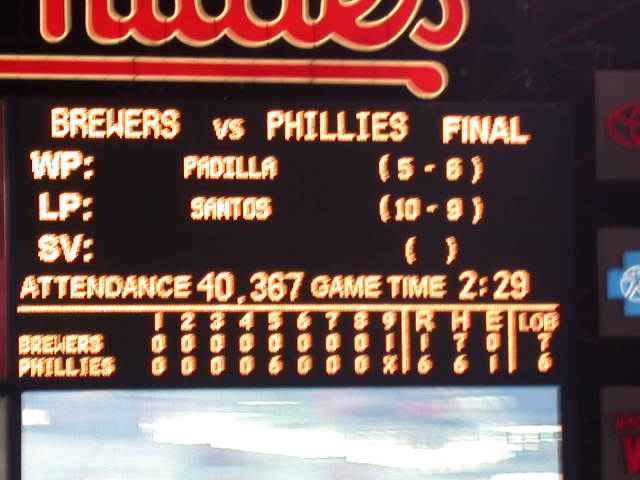 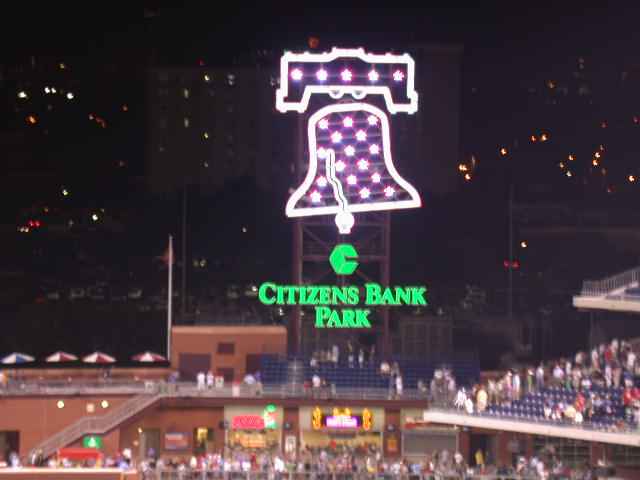