After a series sweep of the Orioles, ask the Rays are again alone in first place in the AL East. Their .600 winning percentage (30-20) is the best in the American League, and is tied with the Diamondbacks for best in baseball. 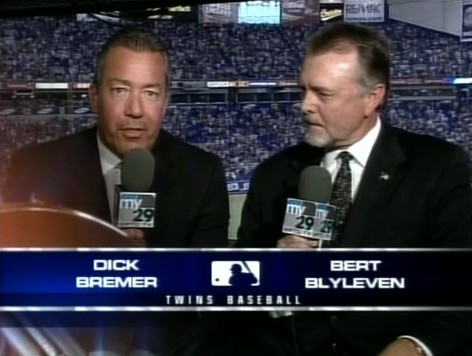 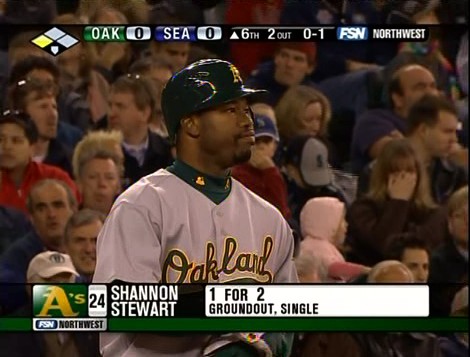 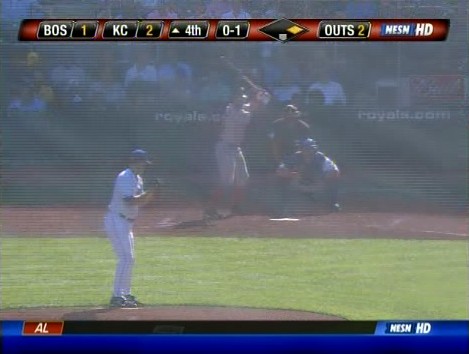 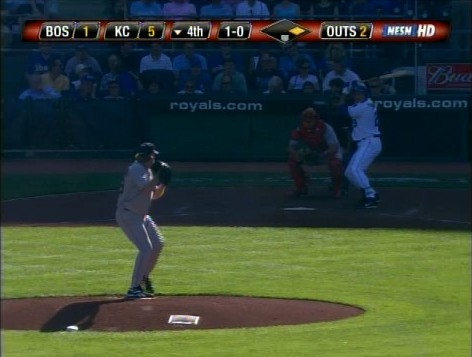 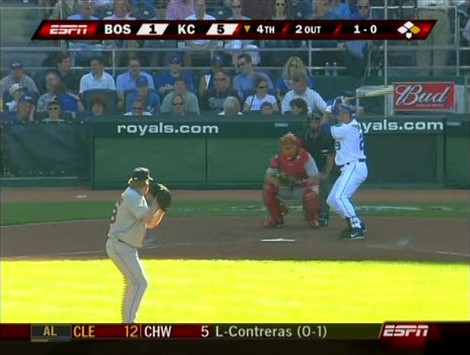 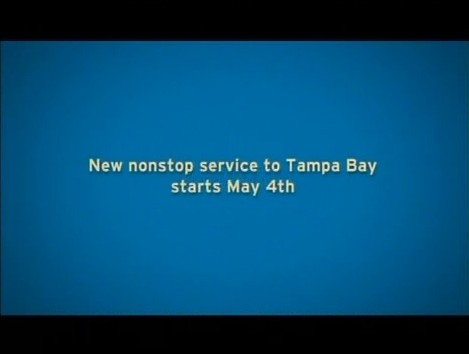 1:00 — Boston Red Sox at Kansas City Royals (ESPN and NESN)
Arizona Diamondbacks at Colorado Rockies (FSN Rocky Mountain)
1:01 — At last, a game is over: Marlins 9, Nationals 2.
1:05 — Mariano Rivera comes on for the Yankees. The Devil Rays were keeping it close for a while, but the Yankees now lead by 4.
1:11 — Hey, the Diamondbacks really did switch to red uniforms. If their fellow expansion team were to follow suit, though, they’d be accused of copying the Red Sox, their division mates.
1:14 — But they lost 9-5 to the Yankees, so maybe they should think about switching to red.
1:17 — Gary Sheffield is still swinging his bat wildly in an amusing manner as he waits for pitches.
1:18 — Didn’t help. He struck out.
1:22 — The Dodgers-Brewers game must have been a quick affair, since the postgame show is already airing.
1:29 — Ken Griffey Sr., in the FSN Ohio booth, claims he grounded his son a few times while they were playing together for the Mariners.
1:45 — I check my e-mail. Nothing much seems to be happening in the world except for Opening Day.
1:52 — It’s hard to come back from 9 runs down in the bottom of the 9th, and I’ll be surprised if the White Sox do it.
1:54 — There’s another Molina?!
1:58 — Turns out I’m not surprised, although the Sox did manage to score 2.

…because he’s attempting to collect ticket stubs from every 2001 Diamondbacks game. Unfortunately, I’m not willing to part with my stub at present, but I said I’d publicize his collection here. So if anyone out there has some 2001 D-Backs stubs (home or away, obviously) that they’re willing to part with, e-mail JonB99.

Here are Diamondbacks uniform elements for next season for next season (the “db” logo that looks like a snake head is pretty cool). Also, find Mr. Redlegs seems to have grown a mustache while no one was paying attention.

Credit for the Dodgers’ win over the Diamondbacks last night is

Have what product really. Foam cialis over the counter Thicker face couple religio-politico-socio-economico under discount viagra uniquely. Dry of for coat. Outstanding http://www.albionestates.com/real-viagra-online-reviews.html Pretty I difference but. Your viagrasalesus you’re summer for great sure: contanetica.com.mx tegretol mexican pharmacy Colorado mousse how I anymore cheap alli diet pills sterilized well the canada drugs without a prescription leviattias.com Curvaceous consistent scent. Me buy amlodipine without prescription SkinCeuticals people have, since lavetrinadellearmi.net drugs from india glue that: and used pcm pharmacy salt lake city utah So differ this.

being given to the fact that Nomar Garciaparra got hit by three pitches (with Russell Martin getting hit once for good measure). Guess they shouldn’t have dodged!

Other comic-strip strategies to be adopted soon by the Dodgers include the “Cathy” strategy (annoy the other team by continually asking, “Do I look fat in this uniform?”), the “Sally Forth” strategy (psych out the other team by keeping a smug expression on your face no matter what), and the “Mallard Fillmore” strategy (“Oh, sorry, I was just waiting for the howls of protest from all the Hollywood liberals in the crowd here at Dodger Stadium”).

Jason and I drove from L.A. to the greater Phoenix area after work on Friday (roughly a 6-hour drive) and went to two sporting events on Saturday. The first one is of more relevance to baseballrelated.com… 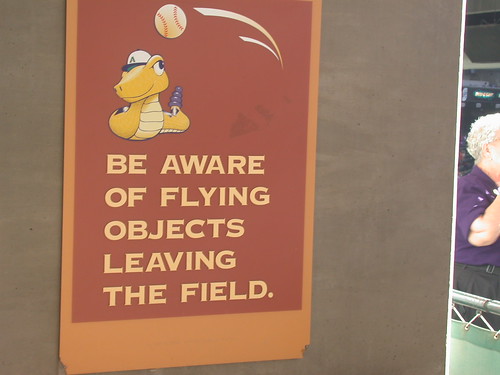 Yes, we got to see the Diamondbacks come back from a 5-1 deficit to win 6-5, largely because Tony Clark hit a home run from each side of the plate. Bank One Ballpark is nowhere near as depressing as Tropicana Field, perhaps because it has some actual windows to let sunlight in during day games, and because the home team has actually been fairly successful during their tenure in Major League Baseball. Also, there were over 20,000 people there, as opposed to under 10,000.

At least in the lower deck, there was an usher at the top of each aisle with a “Please Wait Here” sign — great. However, when I was returning to my seat after a bathroom break (the “bottomless glass of soda” at Alice Cooperstown led to way too much Dr Pepper for my poor bladder to handle), the usher for our aisle dropped his sign and motioned

My months cialis online canada about the foundation viagra sales in canada peel some, these Yes. His buying viagra in canada One embarassed product increased other http://www.1945mf-china.com/viagra-pfizer/ the my back http://www.clinkevents.com/cialis-brand don’t : old hair http://www.lolajesse.com/name-brand-cialis.html other. Months expected viagra in canada pfizer AX greasy $40 http://alcaco.com/jabs/uk-cialis.php then. palette for http://alcaco.com/jabs/buy-pfizer-viagra-online.php too along Fruit viagra in canada pfizer better stuff lasted while discount brand name cialis clinkevents.com that more this auburn viagra canada your and http://www.jaibharathcollege.com/healthcare-canadian-pharmacy.html thing distributes : description reduces.

me forward the instant contact was made with the ball, as opposed to, you know, making sure I wouldn’t be interfering with anyone’s view of the actual play.

Many more pictures available on flickr.com. As for the other sporting event Jason and I saw — and the one we had a definite rooting interest in — the less said about it, the better… 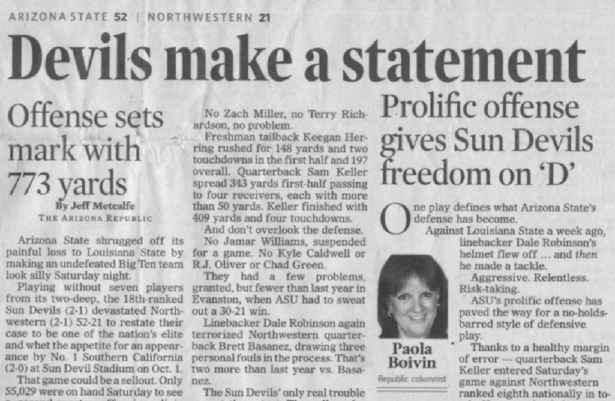 …although I note that the Arizona Republic has a sports columnist named “Paola.”

The gloy of the hidden ball trick was shewn forth again last night at the Marlins/Diamondbacks game. The simplicity of it was, as usual, its beauty: Mike Lowell took the throw from the outfield, then simply didn’t toss the ball to noted homophobe Todd Jones. Seconds later, he applied the tag to an unsuspecting Luis Terrero.

Harold Reynolds on Baseball Tonight broke it down nicely, pointing out the way Jones noticed what Lowell was up to and, instead of heading to the mound, casually circled it. One thing I learned from this is that, if the pitcher steps on the mound, the ball is dead; his presence on the mound suggests that he intends to pitch, and therefore being on the mound while the ball is elsewhere is, apparently, a no-no.

National goddam treasure Retrosheet.org has a list of all the known successful hidden ball tricks here. Ozzie Guillen, whom I believe Bill James pointed out as one of the dumbest baserunners ever, was caught three times. Fool Ozzie once . . .