…because he’s attempting to collect ticket stubs from every 2001 Diamondbacks game. Unfortunately, I’m not willing to part with my stub at present, but I said I’d publicize his collection here. So if anyone out there has some 2001 D-Backs stubs (home or away, obviously) that they’re willing to part with, e-mail JonB99.

That’s What Would Bud Do? Thursday afternoon game that’s the home season finale. Unlikely to be well-attended, even though this year’s Brewers team has been a lot of fun to watch.

I’m guessing Bud would do . . . nothing. Adjust his hairpiece, maybe fire off a fax to the Wisconsin state legislature about how maybe the state should pay for the Brewers to have weekday games.

New Brewers ownership, however, is smarter. They’ve announced that tickets to that game will be free. Absolutely free. And they’ve already distributed 23,000.

Here’s 50% of the items that came in the mail today (in the most nondescript envelope ever, with an indication that it contained “your requested dated material”)…

Yes, it’s vertical, which I had previously thought was an orientation reserved for football and hockey season tickets. (Bleacher section 36 is in dead center field, if anyone’s curious. Looking forward to seeing Johnny Damon’s back!)

Actually, as it turns out, that error message is the modern equivalent of “your telephone is not compatible with the Bell System,” or something like that. I thought the problem was that the Phillies’ web site was too busy, but the problem seems to have been that their ticketing process was incompatible with Macintosh web browsers. Everything worked perfectly on my PC at work, so we now have 12th-row upper-deck seats to see the Phillies vs. Brewers at the new Citizens Bank Park.

Turns out the modern equivalent of a busy signal is the message “DTWP001E: Net.Data is unable to locate the macro file err_bad_user_init.d2w.” (I got up ridiculously early this morning and have been looking at this, online and related gibberish, for hours now.)

I fired up the ol’ scanner tonight, and first of all, since the other attendees have already seen their tickets:

And this is the route map as it stands now. I have a feeling some portions may not be the AAA-approved routes, such as the “back way” to get to Yardley, Pennsylvania from the north (on U.S. 202 and state route 31), which involves going through some of the less smelly parts of New Jersey. 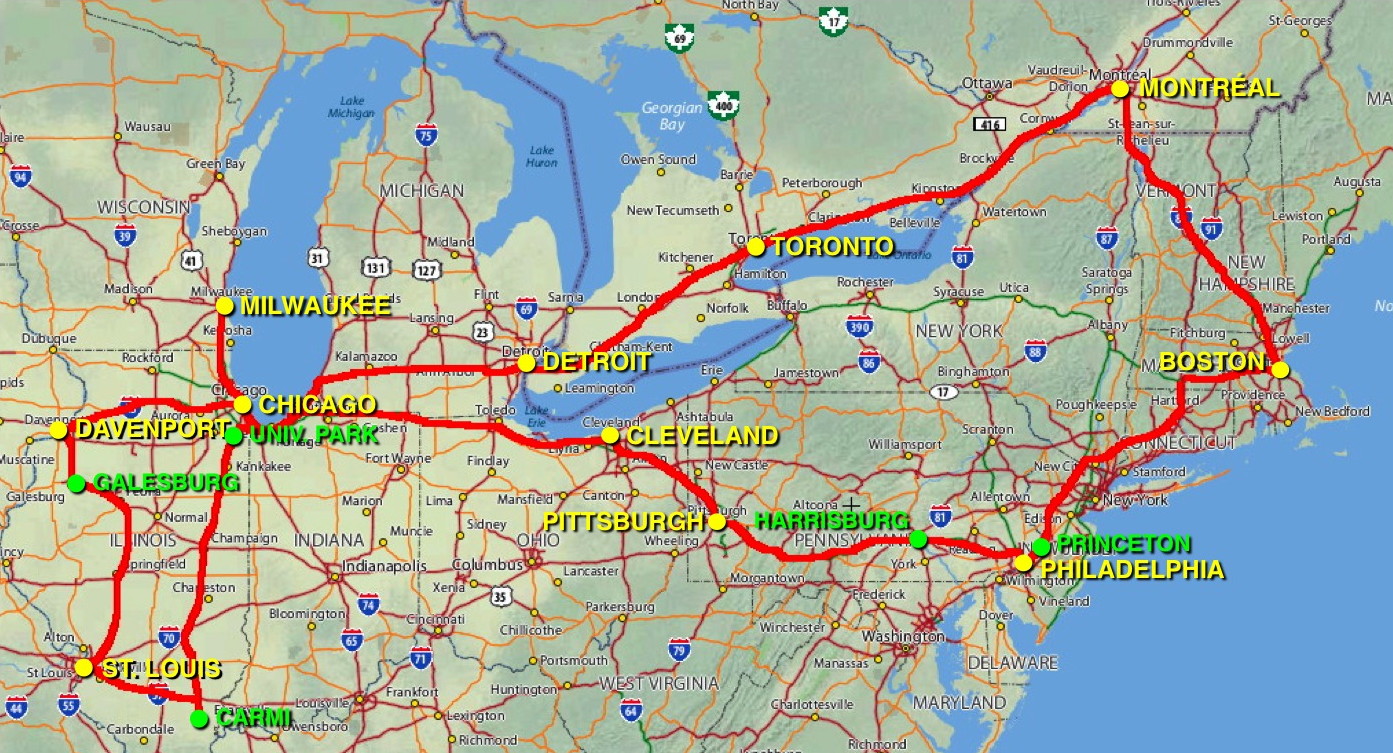 I’m sorry that my clumsy attempts to reduce the image size, not to mention my clumsy attempts to draw a line, made Mapquest’s beautiful cartography look like crap, but I’m not exactly working with the Adobe Creative Suite here. (This is the non-online, made-from-dead-trees 2004 Mapquest “Routemaster” spiral-bound road atlas we’re looking at, just in case you’re wondering why Mapquest.com doesn’t look that good when you use it.)

The first tickets have been purchased, bleacher seats for the Red Sox vs. Tigers at Fenway Park. Up next, Phillies tickets, which go on sale on Thursday the 19th. Those may end up being the only tickets we get in advance, although we’re pretty sure we can use our connections to get free Cardinals and Pirates tickets.

Hey, the Phillies tickets showed up in the mail already! We’ll actually be meeting up with my aunt and uncle at the game and our mutual friend Maura, so I’m going to mail those people’s tickets to them ASAP.

On another note, I bought Padres tickets over the weekend for a May game against the Cubs. This isn’t directly relevant to the road trip, except that both the Padres and the Phillies are going to be playing in new stadiums in 2004, so it’ll be fun to do a comparison and contrast. The Padres’ stadium, Petco Park, already gets points for being named after something warm and fuzzy (well, as warm and fuzzy as a chain store can be, i.e., much warmer and fuzzier than Wal-Mart), whereas the Phillies’ stadium, Citizens Bank Park, loses points for being yet another stadium named after a cold, impersonal bank. Actually, at least it’s a bank that still has “bank” in its corporate name, unlike its baseball stadium naming rights counterpart across Pennsylvania, PNC.

I have been informed that, for budgetary reasons, my company no longer has Pirates tickets. So it looks like we’ll have to pay for our seats in Pittsburgh.

A scan of a ticket is worth a thousand words:

Also in the envelope was the promised $20 in concession vouchers, in the convenient form of four $5 vouchers. That should make it easier for the people who want to eat sausages with Secret Stadium Sauce to purchase them, and if anyone wants to search the catacombs of Miller Park for the stand that reluctantly sells veggie dogs, well, Levi can go off by himself and try to find it.

In other news, I discovered that the necessary files to operate an iTrip are freely available for download, so I will have no reason to connect my iPod to Levi’s computer.

And finally, here’s a quote from a Usenet newsgroup that I felt desperately needed to be posted here: “One of the funnier stories on ESPN radio was Rob Dibble talking about how he checked into a hotel and misunderstood the instructions on the TV screen — he thought he was ordering a block of adult films. The only thing more embarrassing than having the adult films show up on your bill is having to call down and ask the nice girl to please take the block off so you can watch some.”

Toby: Just don’t go to the concession stand during the 7th inning stretch while they’re having the sausage race. Randall Simon is back with the Pirates, you know… There could be another incident…

maura: actually, he was released over the weekend, shortly after he found his SUV riddled with bullets.

Levi: Now, I don’t get releasing Simon right now. You don’t save anything on his salary at this point. You don’t really save an important roster space, because in two weeks you can call up everybody and his grandma. And you lose the fun of having Randall Simon on your team.

I could have understood releasing him the minute you signed him–coming to your senses and just getting rid of him so somebody else, anybody else, could play first base for you. But now that you’ve carried him all this way, why not hold onto him the rest of the year?

Toby: What kind of season is his grandma having in A ball, anyway?

thatbob: When I was freeloading with Angie in San Diego for the librarian convention, we made the same mistake with the “Adult Block” feature. Except we weren’t actually trying to order the adult block, we just wanted to look at the funny movie titles. Really!