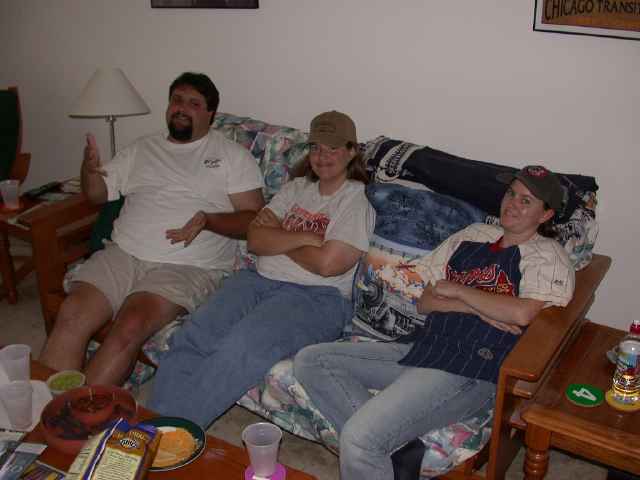 Jason, Jenn, and Cat came over to my place today to watch Greg Maddux go for his 300th win, mainly because Cat is a big Greg Maddux fan who is bereft of WGN. In a secret ceremony involving Hostess Baseballs, I named them honorary hangers-on for the trip, especially if Cat ever remembers to visit this web site.

Now, here’s what happened here in July: the most visits came on Monday, July 12th, with July 13th right behind. Clearly, everyone was very interested in my Yankee Stadium pictures. The lightest day was July 17th, a Saturday. The busiest day of the week was Friday, although that’s skewed by the fact that there were five Fridays (and Thursdays) in July, and only four of the other weekdays.

The most popular hour was, once again, the hour Levi gets to work (that’s what it says on the statistics page now). The most “foreign” visitors came from .au (Australia). Uchicago.edu was the domain with the most visits. Covad.net (me at home) would have beat it slightly, although it’s likely that I wasn’t the only visitor coming through covad.net.

maura: there weren’t many mlb.com visits?

maura: maybe i’m just not aware that i now have a job where i am actually (shock horror!) BUSY AT WORK.

Jim: Does mlb.com perhaps get its Internet connectivity from Verizon? That’s the only New York-looking thing that shows up as having been a frequent visitor.