Now, I admit that I’m stealing this from Baseballprimer, but I couldn’t resist. There’s a happy ending to an initially worrying story: yesterday, it was reported that the family of noted oversized reliever Rich Garces (listed as 6’0″, 250 lbs., a measurement that makes Bush’s budget deficit predictions look comparatively right on target) hadn’t seen him for a few days and were worried that he might have been kidnapped. Well, he turned up safe and sound, having spent a few days at the beach. That in an of itself is a good story–if only because now little kids don’t have to cry all night worrying about kidnappers big and strong enough to kidnap El Guapo–but the Google translation of the story from the “Dazzling Venezuelan” newspaper makes it even better. The title to this post is the headline to the story, if that gives you any idea of the clarity and power of this translation.

The story also reveals that El Guapo is in talks with the Orioles. The pairing of Garces and Oriole Sidney Ponson would be a victory for all fans of out-sized pitchers. Here’s hoping!

Levi: Correction: It isn’t a story from the Dazzling Venezuelan. It’s from ESPN Deportes.

Jim: I wish the police really did have a Division of People Misled!

And can we please start calling him “Corpulento Throwing” instead of “El Guapo”?

Levi: I can think of 57 million people who could have used their services back in November.

I seem to remember Baggarly writing a story or two about recently departed Giants catcher A. J. Pierzynski being a clubhouse cancer. Well, according to the San Francisco Chronicle, one of the many elements in A. J.’s clubhouse-cancerness was this:

One of those now-it-can-be-told stories the White Sox, A.J. Pierzynski’s new employer, surely haven’t heard: During a Giants exhibition game last spring, Pierzynski took a shot to his, shall we say, private parts. Trainer Stan Conte rushed to the scene, placed his hands on Pierzynski’s shoulders in a reassuring way, and asked how it felt. “Like this,” said Pierzynski, viciously delivering a knee to Conte’s groin. It was a real test of professionalism for the enraged Conte, who vowed to ignore Pierzynski for the rest of the season until Conte realized how that would look. The incident went unreported because all of the beat writers happened to be doing in-game interviews in the clubhouse, but it was corroborated by a half-dozen eyewitnesses who could hardly believe their eyes. Said one source, as reliable as they come: “There is absolutely no doubt that it happened.”

That kind of behavior would go a long way towards explaining why a catcher with a career line of .294/.336/.438 isn’t valued more highly. He should fit right in on the White Sox, a team Batgirl described once as being so unpleasant that, if you traded every player, they’d still have a character problem.

Steve: What a payoff for checking in. You think a catcher wouldn’t be such a pussy in the first place.

Levi: You know, now I can picture what Mike Matheny’s agent told Brian Sabean: “Sure, Mike won’t hit for shit. But I guarantee you he won’t knee the trainer in the balls, either.”

I had a coupon for General Mills cereals, so… 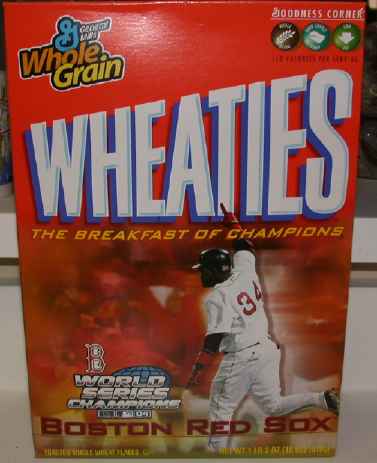 What, do they think people wouldn’t want to look at Johnny Damon while they’re eating breakfast?

Could this band have the greatest baseball-related band name of all time?

No, unfortunately for them, because this band does.

thatbob: Those links don’t work on my work computer. Can’t you just tell us what the bands’ names were?

Jim: But what fun is that?

Band #2 is Ghost Runner on Third.

“The introductory verse of this 1908 song begins ‘Katie Casey was baseball mad.'”

For the second straight year, Pepsi is giving away iTunes downloads to improve their sales during the dead of winter. The actual promotion apparently starts January 31st. We’ll have to see how long it takes the Pepsis with the promotional caps to show up in the Los Angeles area. (Last year it took about six weeks from the time the promtion started nationwide, because the local Pepsi bottler was running a promotion of their own.) But the good news for me is that the caps are supposed to be on 20-ounce bottles of all Pepsi products, including Wild Cherry Pepsi — and Mountain Dew Code Red, although I don’t recall ever seeing that in a 20-ounce bottle.

I’m not sure how many baseball songs have been added to the iTunes Music Store since last year, but I guess I’ll find out. It’ll be fun!

Hanger-on Jay passes along this note about the August 22, 2004 Cardinals-Pirates game: “At the game you attended in St. Louis, reliever Steve Kline got on base on a sacrifice and a fielder’s choice and then scored on either a triple or a grand slam from Larry Walker. Well, it turns out you have personally witnessed every run that Kline ever scored.”

He’ll be ready for Spring Training.

Luke, hanger-on: I’m not big on recounting dreams, but …

Last night I dreamt I saw Stacey at a Critical Mass. I asked where Levi was — and he was on a baseball-related trip to Florida.

Unfortunately that’s all I remember.

Luke, hanger-on: I’m so sorry: Another dream. Apropos of nothing but baseball.

In this dream I’m organizing a trip to the ballpark with Owen, someone I went to school with in Oregon 10 years ago and haven’t thought of since. It occurs to us that a lot of the people who would come to a game with us were named Ed, so I propose we call our event “Eds Go Out to the Ballgame.” We’d invite anyone whose name was Ed, and those whose name wasn’t Ed could change theirs, and we’d get Ed Debevic’s to sponsor us.

Two minor dreams about baseball in one week. I’m now thinking of the Peanuts series where Charlie Brown wakes up and the sun is a baseball, and by the end of the week his head is a baseball.

Given the illegal leaks from the trial last month of that shady character Barry Bonds and Jason Giambi were hanging out with, it’s become more difficult to believe that Bonds has not used steroids. I remain in the innocent until proven guilty camp (a camp that, along with great s’mores, boasts the absence of both our former and our soon-to-be Attorneys General), but assuming the testimony is accurate as reported, then Bonds is either dumb, which anyone who’s watched him play knows he’s not, or he used some steroids that his shady trainer gave him.

So say Bonds used steroids. How does that make me feel about his accomplishments, since I’ve spent the last few years in the “Bonds is probably the greatest player ever” camp? King Kaufman gave his take on it at Salon: Bonds has fallen, in Kaufman’s estimation, from best player ever to one of the best ever.

I still wasn’t sure how I felt about it. Then one day, it hit me. I realize this isn’t by any means a perfectly analagous situation, but I feel a lot about Bonds probably using steroids as I do about Bill Clinton getting blown in the Oval Office: I honestly don’t really much care about the act itself, but I am irritated that either man would be so dumb as to do what he did, knowing the tremendous, irreparable damage it would do to his overall achievements if it came out.

As I said: not exactly analagous. For example, while there’s no rule against getting Oval Office action, there is a rule against using steroids while playing Major League Baseball. And while the damage to Bonds’s reputation is sad for me as a baseball fan (and as a champion of players of this era as, overall, the best ever), the damage to the country from Clinton’s public gelding at the hands of Ken Starr’s inquisition is much, much worse. Bonds’s possible cheating was unfair to those who played by the rules, while Clinton’s definite cheating was only unfair to his family.

But other than that, I find I can’t get all worked up about it. Sure, I wish Bonds definitely hadn’t used steroids. I wish Clinton hadn’t unzipped. But that doesn’t fundamentally change what I saw. With Bonds, I saw the best batting eye I’ve ever seen coupled with baseball smarts, a fierce competitveness, and a punishing work ethic. Without steroids, I firmly believe he would still have been the best player of his generation–he was well on that path way back when he was still skinnny. With Clinton, I saw the best politician of our lifetimes, who, while frequently frustrating me on particular issues, left our country in much better shape than it was when he took office. The fact that the Democrats were unable subsequently to capitalize on that, though partially his fault, doesn’t change my perception of Clinton’s gifts.

We’re less than six weeks away from pitchers and catchers.

Dan: One small point, though… Steriod use was illegal only from the beginning of 2003 (I think), which makes him “legal” for certain for at least 613 of his homers.

Sure, if he was using it, it was an unfair advantage, from the standpoint that he used it and the pitchers (that we know of) didn’t. But it was within the rules, on a very technical level. And all those pitchers could have used the same drugs to enhance their performance, too, during the same period.

All that said, the greatest player of all time remains Howard Johnson. With Barry Bonds and Melvin Mora “among the best.”

Toby: In my opinion, he’s not even the best Giants player ever (Willie Mays) or the best Pirates player ever (Roberto Clemente). Of course that could be a little biased since he left the Pirates (and made no secret he was going to…

Since the trip is now officially last year, I figured it was about time to put it into the archives, so to speak.

I went back to the original posts about the trip and edited them into a full trip report, including the photos and even some of the comments. I also wrote a page on which I discuss some of the planning that went into the trip. The best news for people who want to read about the trip is that you don’t have to start at the “bottom” and work up; now that it’s not in blog form, it reads normally. The link to the narrative is also at the top of this page.

Don’t worry, I didn’t delete the original posts. They’re still in the blog archives (scroll down to the bottom of this page and select “August 2004” or “September 2004”).

Jason: A fine read. So, how many ballparks remain that you yet have to visit?

Jim: There are now 13 major league ballparks I haven’t been to (counting RFK Stadium in Washington). Any interest in a long weekend trip to Phoenix and Denver at some point this year?

Jason: Sure. Any interest in checking out a whole bunch of minor league games in California next year?

Jason: And I just noticed the new title of the site. Funny!

thatbob: Why schedule a long weekend roadtrip to Phoenix later this year when it might be easier to include it in a Baseball Related Programing Activities West Coast Road Trip 2005. After all, it’s only a 5.5 hour drive from San Diego, but a whole 7(!) hours from Los Angeles!